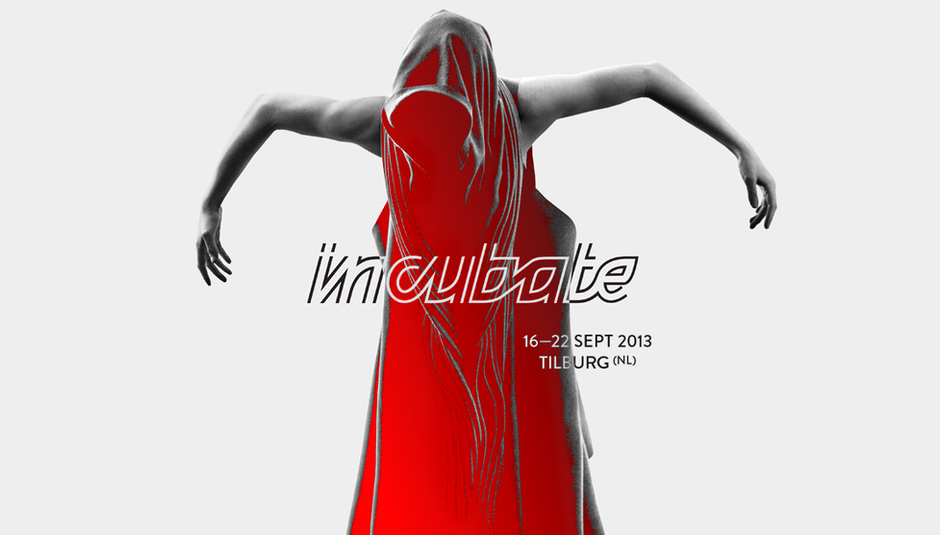 So here we are again. This time last year, DiS hit Incubate, the Netherlands' best left-leaning festival – with, err, the aid of a good few beers in between bands – to bring you this review. Feel free to bone up a little on why we already love Incubate so much. But for those not fortunate enough to have had the pleasure, we're at possibly Europe's finest 'urban' music festival – as in a festival held in various bases around an urban area, rather than one overflowing with with hip-hop treats. Although there is a healthy helping of those, too, this time around.

Centring on Tilburg's (annoying beer token system aside) excellent 013 venue, alongside countless smaller bars, arts centre and repurposed spaces around the city, this year sees a stack of additional stages join the fun. And while that doesn't do much for our aching, Tarmac-traipsing feet, it's a heartening sign that Incubate is deservedly growing from its modest beginnings into a far, far larger beast. Deep breath, hold onto your livers; we're going in...

After four nights of more modest festivities, the seven-day Incubate truly kicks into gear for the weekend. Things don't really get underway until the evening still, however, so the first recipients of our virtual pen are Giant Drag (De Nwe Vorst). Annie Hardy may look like the elegantly wasted indie chick of teenaged boys' dreams, but the tales of drug addition start to make a little sense when she opens her mouth. Was she always this dumb? Or have events taken their toll? Because repeatedly (we hope) joking that she doesn't know which city – or possibly country – that she's in, then shouting out to “Amsterdam” and suggesting that she'll be going to visit “some of your hookers, but just to look at” isn't the best way to win over an already-sparse crowd. And while continental Europeans might get a bad rap for their perceived sense of humour, nobody's laughing with good reason here; that, sadly, relegates Giant Drag's breezy Royal Trux-lite into insignificance.

Strike us down with a church burning, but we forego the corpse paint double header that is Mayhem and Immortal, and instead venture to the wrong side of the tracks – literally crossing under railway lines to a skate-park in a slightly sketchier area of town – for Masta Ace (Hall of Fame, 8.6 Stage). Never mind black and yellow, because the finest hip-hop OGs this season are wearing black and orange, in what we hope is the New York rhymer's nod to the Oranje. He balls through a selection of cult hits with gusto and no little crowd-moving skills. Dare we suggest that his hyper-tardy set was delayed in his reaction to the preceding Dutch rappers, who chat in their native tongue between songs so in thrall to NYC diction and musical history that they may as well have just fellated a model of the Statue of Liberty onstage?

Next up, a flit between Vatican Shadow (Hall Of Fame, Foyer) and East India Youth (8.6 Stage), but when both fail to fully take our attention, it's left to the Smith Westerns' (De New Vorst) enjoyably jangly post-Black Lips lo-fi scuzz to restore energy levels instead.

The energy is somewhat darker over at the Little Devil for Motor City ear-shredders Wolf Eyes. They're made all the more terrifying by the fact that this tiny bar-slash-venue is so jammed that there's little way of seeing the evil bastards making the horrific, rhythmic din that fairly engulfs and destroys all before it. After that, heading back to Hall Of Fame's Foyer for Kyle Hall – also from Detroit – seems apt; ultimately, attempting to follow Wolf Eyes with less-than-brutal tech-house shapes is as fruitless as it sounds written down.

Thanks to a tip-off from DiS's estranged brothers over at The Quietus, we start early for the Electro Chaabi Wedding Party (Duvelhok) and are rewarded with one of the sets of the weekend. Two blinged-up Egyptian emcees – Sadat and Alaa Fifty Cent (yeah, not that one) – that plonk gangsta ethos on top of full-on knees-up entertainment, the daylight hours and a live stream link-up with a related wedding back in Cairo make for a bewildering but bewitching experience, with considerable stamina (all three hours of it) to boot. The concurrent glorious abandon and danger of a North African night out are all present and, everywhere you look, wide grins are plastered across faces. Shukran, gentlemen.

Onwards. Teeth Of The Sea (Stage01) are a mass of pulsating post-rock volume, dry ice and (one hopes deliberately) dreadful moustaches; A Place To Bury Strangers (Kleine Zaal) attempt something broadly similar later but forget to bring much beyond straight-out decibels to the party. Grumbling Fur (Paradox), meanwhile, give us a much more cerebral going over, followed by the blitzkrieg black-hearted white noise lunacy of Prurient (Stage01) – yet early evening is not the time for the most challenging extremes of Dominick Fernow, the man also behind Vatican Shadow and a sometime Cold Cave conspirator.

Next, an apology. There's no easy way to say this, so strap in: tonight, Gang Of Four (Main Stage) are nothing short of a goddamn disgrace. Sorry. There's a suspicion that some of the newest members were probably still being spoon-fed when the band were in their original post-punk pomp. And, boy, does that lack of original spirit show. Limp, insipid and tired, few other sets in the entire history of festivals can have emptied a venue from four figures to barely a few hundred so fast. It's a real shame.

That's swiftly forgotten, gladly, thanks to a subsequent evening of acid house delights. A bunch of acid casualties tinker with almost-knowingly ostentatious desks and hardware trinkets in 013's foyer area, while the likes of Squarepusher's gurning brother Ceephax Acid Crew and Kosmik Kommando (both Main Stage), and DJ Pierre and Hieroglyphic Being (Kleine Zaal) ramp up the tempos nearby. Young pretenders are given a lesson in stagecraft by old hands 808 State (Main Stage), though – despite their live band-embellished techno being far from cutting edge in the year 2013, somehow, among a raft of 303 and (ironically) 808-worshipping DJs with little interest in moving off the spot, it feels fresh and worthy of filling the dancefloor. Considering which country we're in, there seems to be a far less hedonistic, dribble-fest vibe than your average London rave-up (attendees of Bangface may know what we're on about) and more emphasis on the simple pleasures of just letting bass and beats take over your plates of meat. So that, friends, is what we do.

The only way to blow away the cobwebs of Saturday's excesses is with a metallic head vacuuming, angrily provided by Southern Lord's Belgian bruisers Hessian (Stage01). What they lack in charisma they positively eviscerate in ired kinetics, exorcising some incomprehensible demons inside barely 30 minutes.

Much like Prurient a little over 24 hours earlier, something feels incongruous about tucking into a slice of prime stalwart crust at 3pm: Doom (Kleine Zaal) only scratch any real itches when dispensing dry wit in what appears to be a Sheffield accent during lulls in their set.

One man, a sparingly used guitar and a voice of pure pained longing, Richard Dawson (Synagoge) is genuinely something special. He commands us all to eat flowers that are dutifully passed around the hall (yellow let you see in to the future; white bring you back to the present – or at least that's all that we remember after enjoying a nibble). But the Geordie's mumbled introductions and surreal banter are at odds with the raw, heartfelt emotion wrung into minimal outpourings such as 'Poor Old Horse'. A reverent atmosphere is increased by the relatively small number of attendees that can squeeze into this grand little building multiplied the fact that it is a genuine Jewish place of worship. Mesmeric.

A quick trip around the globe for you. Welsh hardcore rolls into town in the shape of Bastions (V39), slightly hamstrung by a borderline-muddy mix that takes the edge off roaring dissections on the futility of small-town life. Argentinian trio Las Kellies (Cul De Sac) are infinitely more stoic by comparison, dispensing their ESG-esque no wave with a disdain that can't help but come off as rather adorably cool.

FIRST WORLD PROBLEMS ALERT: our phone GPS doesn't seem to want to help us to find the slightly off-the-Incubate-beaten-track Theatres Tilburg venue, and by the time that we do, CocoRosie are all but finished. The alternative turns out to be the absolute visual opposite of the intoxicating Casady sisters. Fat White Family (Cul De Sac) are a sight to behold, for sure. In fact, who knows if it's possible to figure out exactly what you're looking at within the mere space of a 45-minute set? There's clearly parts of The Fall's ramshackle charm and Clinic's organ swells present and correct. But the microphone-sharing, last-gang-in-town attitude is begging for the 'L' bomb to be dropped. It feels like witnessing The Libertines rebooted into something altogether more unsettling. Their grubby, wiry singer Lias has a monk-esque circle shaved into the crown of an otherwise moppish, unkempt hairdo that's straight out of the heyday of baggy. His bandmates all wear the 10-mile stares of men who are waiting for their medication to kick in. As we depart the venue we see the band talking to newly converted fans by a side door near – with fitting dirty juxtaposition – the entrance to a strip club. Mere moments later, we overhear a snippet of a conversation between Lias and a female Dutch festival-goer: “You sccchhmell like a burp,” is her succinct conclusion. Unpleasant music for unpleasant times. But despite a handful of musical missteps this weekend, we still won't hear a bad word said against Incubate.