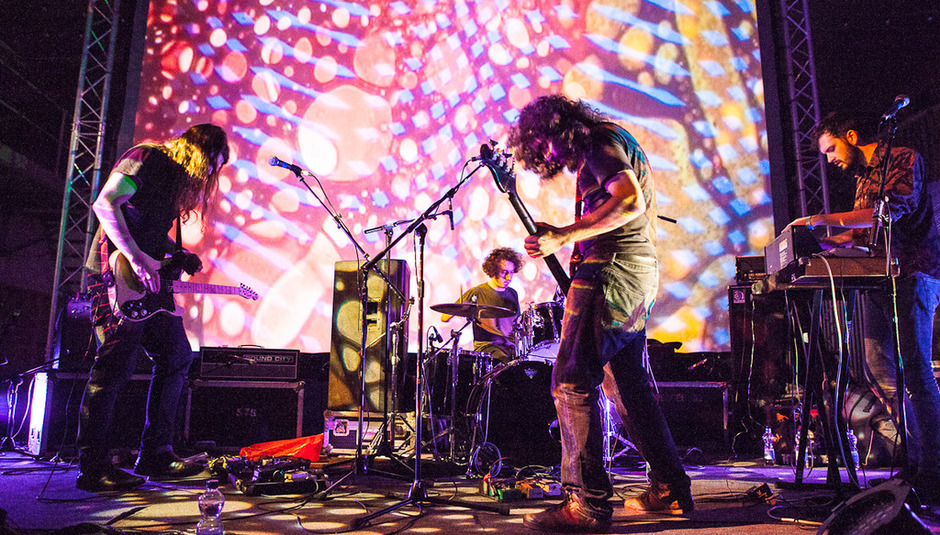 Those in thrall to the wonders of hip hop and R'n'B may disagree, but the musical landscape's most enterprising avenue has undoubtedly been the rapid growth of the new psychedelic movement in recent months. While the debate still rages on as to what exactly "psych rock" is, the 2500+ hearty souls who've made their way to Liverpool this weekend aren't averse to indulging in an eclectic mix of sounds and styles. Ranging from sixties influenced folk-pop to early nineties shoegaze, abstract dance grooves, stoner rock and even traces of Washington DC inspired hardcore. Psychedelic (or Psych) rock contains a burgeoning range of influences ensuring this year's line-up has a diverse, all encompassing fusion of genres running through its very core.

Held over two days (Friday 27th & Saturday 28th September) and spread across three stages in Liverpool's Camp & Furnace building, this year's festival - still only in its second year - saw over fifty bands and twenty DJs entertain what can only be described as one of the most enthusiastic and welcoming crowds DiS has experienced all summer. Indeed its title as the "International Festival of Psychedelia" couldn't be any more appropriate, bringing together artists from the unconventional likes of Chile and Mexico as well as the US, UK and rest of Europe. Add an impressive audio and design collaboration in the Camp & Furnace gallery space between Sonic Boom and screen-print collective Heretic, film shows courtesy of Shindig! magazine, and a conference discussing underground Britain's relationship with LSD and you've all the ingredients for what is a truly original and innovative affair. With so many incredible bands to choose from, DiS is torn in a three-way face off from the outset. Mancunian outfit Kult Country come out victorious, their brand of raucous, percussion heavy doom rock providing half an hour's worth of teatime treats. Glaswegians The Cosmic Dead also make an incendiary racket despite arriving on stage later than scheduled. Imagine the second coming of Hawkwind or a less frazzled Gong and you're in the right ball park.

Having just released their seventh long player in the shape of impressive return to form Warble Womb, expectation levels were high for Dead Meadow's set. Unfortunately; as with their Camden Crawl set in 2010, there's something about Dead Meadow live shows and festivals that don't translate too well, and here is no different, their fuggy stoner rock becoming somewhat lost in the vast confines of the Furnace. London noise rockers The Oscillation fare much better. Playing to a packed room in the comparatively smaller Blade Factory, there's a genuine sensation as material like 'Dreams Burn Down' and 'Descent' off excellent new long player From Tomorrow reverberate emphatically around the room. So much so that we almost forget Psychic Ills are playing in the next room straight after, utterly mesmerised by Demian Castellanos and co.'s incredible set.

Fellow Londoners The KVB are a minor revelation too. Having been around for what seems like an eternity, they've struck gold this year with the excellent Immaterial Visions and while comparisons with the likes of A Place To Bury Strangers and The Lost Rivers are always inevitable, it's the more electronic industrial segments of their set that whip the audience into a sweat-drenched frenzy. Back in the Furnace, Moon Duo are welcomed by a procession of white clad figures who proceed to flounce around the stage then leave as Ripley Johnson and Sanae Yamada appear. Having played a number of UK festivals this summer, they're in their element here and the likes of 'Sleepwalker' and 'Motorcycle I Love You' are greeted with all the apropos of a forgotten sibling returning from a self-imposed ten-year exile. With the early hours fast approaching, it's left to Eat Lights Become Lights to wrap up the first day, which they achieve with an impeccable style and panache. Heavily inspired by krautrock and post-punk as anyone that's heard their records will testify, there's something more otherworldly, daring even about the live show. With a set comprised of material from all three long players, what's most striking is the improvised nature of their show, pieces gliding effortlessly into one another while the ravenous audience laps up every solitary note. 'White Horses' pulsates then twists and turns into an altogether incendiary beast entirely while 'Heavy Electrics' conveys a dancier element alongside the Germanic groove synonymous with its creators mantle. All told, they're a mindblowing experience and appropriate climax to an excellent opening day.

East London's Novella kickstart proceedings on Saturday, and while their Stereolab-go-C86-with-better-effects is a nice enough way to start the day, they seem a little nervous in this setting compared to previous shows of theirs we've witnessed in the Big Smoke. Hotly tipped six-piece Lola Colt are something of an anomaly too. More so because their heavily rhythmic inspired repertoire reminds us of Siouxsie fronting Clan Of Xymox. Although still at something of an embryonic stage, the potential's obviously there and with a few more standout tunes their future could be very bright indeed.

It's left to Danish outfit The Wands to up the ante somewhat. Drawing on a diverse range of sounds and styles incorporating West Coast psychedelia, folk and BJM inspired spacerock, their captivating set ends up being one of the highlights of the entire weekend. Drones collide with effervescent melodies while the core duo of Christian Skibdal and Mads Gras provide the swooning harmonies that accompany each piece. Over in the Blade Factory, Faux Discx founder and Cold Pumas member Dan Reeves "other" project The Soft Walls appear to be battling numerous technical issues throughout their set. Sadly, this makes for half and hour's worth of stops and starts which never really gets going at full throttle.

East London's Charlie Boyer & The Voyeurs placing on the bill may have raised a few eyebrows with traditionalists that deemed them "not psych enough" to be on the bill, but anyone witnessing their forty minute set on the Camp stage couldn't have failed to be impressed. Clearly tailored towards the audience, two new songs are debuted, the first of which is reminiscent of Toy's 'Kopter' by way of an elongated breakdown segment in its final two-thirds. Another new one which may have been called 'Stuttered' owed more to the familiar glam-pop of older material like 'Be Nice' and 'I Watch You', which bookend the set. Sadly, more technical problems ensue during Singapore Sling's set, at one point even threatening to curtail the entire performance. It's therefore left to Hookworms to demonstrate why they've emerged in recent months as possibly the band of 2013. With debut long player Pearl Mystic already assured of a high placing in many end-of-year lists, their live show is also fast becoming an unmissable event in its own right. Intense and heavy in sonics from start to finish, their amalgam of psychedelic rock as channeled through the eyes of a post-hardcore band is a joy to witness this evening. 'Away/Towards', arguably the best opener to an album since 'Untitled' off Interpol's Turn On The Bright Lights sets the scene admirably for what follows. One brand new, as-yet untitled song is also aired, which suggests album number two; already well into development; could be an even more colossal and brooding affair than its predecessor. Simply incredible, and on this form if there's a better live band currently based on these shores we've yet to see them.

It's left for White Manna to follow what many would consider an impossible task, and to their credit they do an ample job. Mugstar provide an exercise in visceral noise rock next door, while Helicon's Velvet Underground inspired drones also conspire to keep a full Blade Factory enthralled, even if the sound quality is enigmatic at best. With this 2013's event drawing to a close, Bernard Butler's latest project Trans deliver a set bristling with Neu! inspired song structures and a melodic sheen not that dissimilar to some of his previous work. The biggest surprise is only a few hundred hardy souls remain in the building to see it. However, after forty-eight hours worth of intoxicating sounds and panoramic visions, it's been a weekend to remember. Liverpool you've done us proud. Here's to next year!