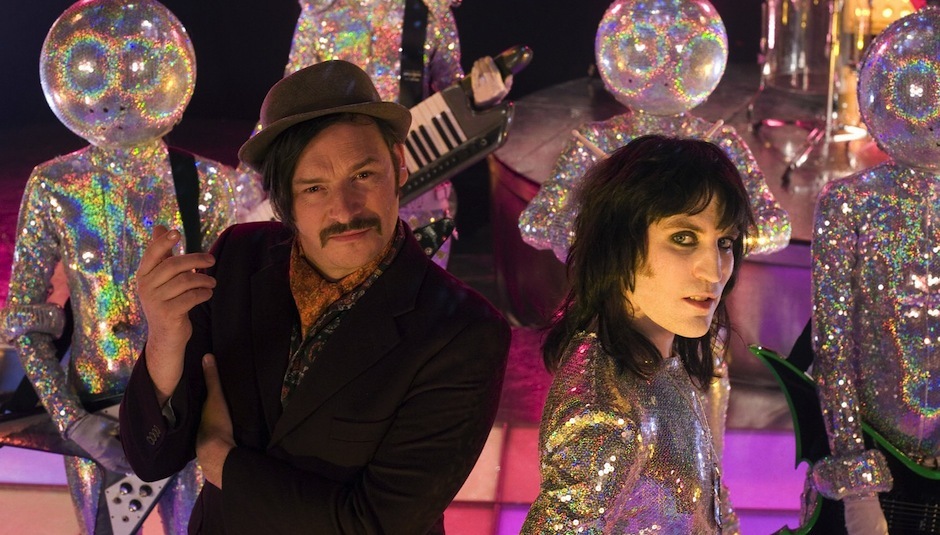 Music & Comedy: Why do people look down on humour in music?

Music &amp; Comedy: Why do people look down on humour in music?

It’s hard to be taken seriously in music when you do jokes.

I play bass in a band called The Men That Will Not Be Blamed For Nothing, formed by the cult stand up comic Andrew O’Neill, and Andy Heintz, one-time singer in gonzo 90s Goth-metallers Creaming Jesus. The band was put together in 2008 to provide support for a Victorian themed stand up show Andrew was touring, playing cockney knees-up rock songs about the Victorian era: a literal Steampunk band, as opposed to the goth-cabaret nonsense that word usually inspires. We enjoyed doing it so much, and it worked so well, we decided we’d do a few more gigs - things snowballed, we gained a following that took even us by surprise, and over the course of the next few years put out two albums, did a bunch of touring, played most of the major festivals and gained a reputation as a loud, fast and solidly entertaining live punk band.

We take the band very seriously, though the lyrics themselves are sometimes far from ‘serious’. We’re a band with comedy, crucially, not a ‘comedy band'. But despite a healthy following and decent reviews, proper ‘industry’ types (agents, media etc) are often dismissive. There’s jokes in the lyrics, and the mix of comedy and music (and silly hats) is apparently an instant turn off.

It seems strange that combining two forms of populist art can be so off-putting, because the separation of the two in culture is a relatively new thing. George Formby was the biggest pop star in the country and the biggest comedian with exactly the same material. The Beatles toured with stand ups in the early 60’s, and 80’s punk bands would commonly enlist alternative comics like Phil Jupitus and Ted Chippington as support acts. In the 50s, 60s and 70s it was common for ‘comic’ songs to become chart hits, and while the Barron Knights were faintly embarrassing, the Bonzo Dog Doo-Dah Band, who combined comedy with rock, Music Hall and jazz, were anything but. They were cool. When did we start to look down on humour in music? Is it the fault of horror-show novelty records like Chubby Brown doing ‘Living Next Door To Alice’ or Spittin’ Image’s ‘The Chicken Song’? Because that hardly seems fair.

Under the radar comedy and music are still very much going hand in hand. This week the Mighty Boosh will dust off their glittery suits for a rare outing of the Boosh Band - in their mid-noughties prime the Boosh’s fanbase was essentially a band’s fanbase, rather than a comedy act’s. Cannon and Ball never got on the cover of the NME, they never got moshpits and stage invasions. Flight of the Concorde’s pull off a similar trick, even releasing two albums through Sub Pop. Both acts throw-back, in a way, to Monty Python, whose fully-hummable, proper song ‘Always Look On The Bright Side Of Life’ is as ubiquitous as ‘Hey Jude’ while being genuinely funny.

In the Hip Hop world you don’t even have to hide the humour - Eminem’s most critically acclaimed and ‘serious’ album, The Marshall Mathers LP has a skit where he’s felated sloppily by the Insane Clown Posse. Nobody bats an eyelid. In the white indie and rock worlds however, you’re simply not allowed the put the jokes up front. That said, there are plenty of bands who genuinely are funny, but because it’s not overt they get away with it. Go through the lyrics of Mountain Goats, Los Campesinos!, Morrissey or Pulp. Go and see Slow Club and listen to Rebecca Taylor’s between song banter - she’s properly hilarious. It’s all below the surface though, because no self respecting band can make a serious career out of comedy.

The thing is, music could learn a great deal from the comedy world. A really good band could toil forever and never get the right combination of luck and contacts to make a living from what they do. Meanwhile, a really good comedian, with the willingness to put the work in, can build a career and live happily off it in a few years. Stand ups are allowed on TV to showcase their talents in their natural environment... how many live music shows are on mainstream telly now? A well promoted comedy night can fill a room without even advertising the name of the acts, whilst music audiences are nowhere near as trusting. Mind you, it’s harder to flog a stand up crowd a t-shirt.

Marc Burrows is a stand up comedian and bass player in The Men That Will Not Be Blamed For Nothing, as well as a regular contributor for DiS. The band play The Garage in London on Friday October 4th, see WeGotTickets for tickets.

Click below to listen to their new single ‘The Gin Song’