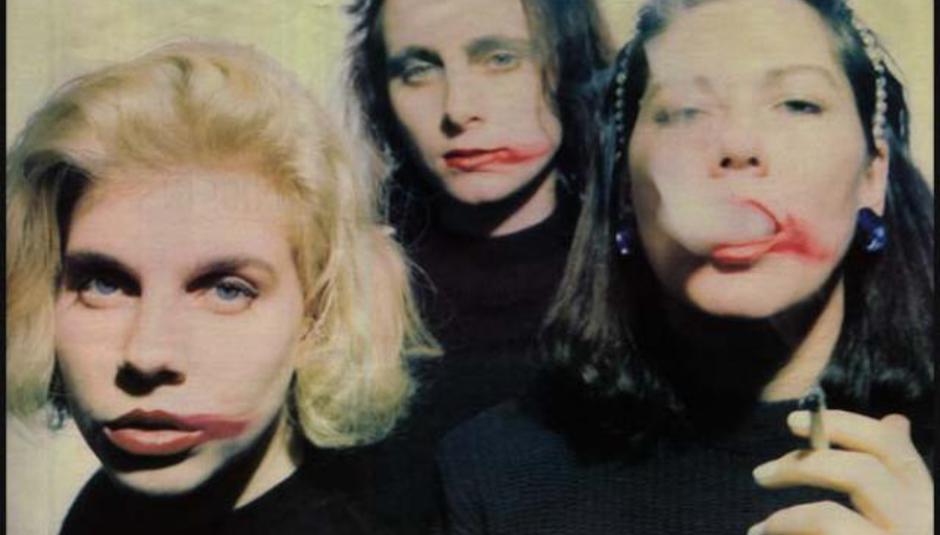 4AD week - In Praise of The Breeders Title TK

4AD week - In Praise of The Breeders Title TK

To mark the release of Martin Aston's book, Facing the Other Way: The Story of 4AD, DiS celebrates one of our favourite labels with a series of pieces exploring the label's history. Here, J.R. Moores extols the virtues of The Breeders'Title TK.

As I grow older, I am increasingly stricken with an antipathy towards my fellow gig-goers which threatens to escalate into outright violence some fairly stern tutting noises. One of my recent bouts occurred at the Deerhunter-curated ATP Festival, when The Breeders were playing their Last Splash LP in full to mark its twentieth anniversary. I felt surrounded by jibbering cretins, idly chit-chattering their way through any song that wasn’t a) ‘Cannonball’ or b) slightly bouncy. After the delicate ‘Do You Love Me Now?’ had battled to be heard over the hum of a hundred scarf-with-t-shirt-clad, thick-rimmed-spectacled fringe bearers, as they moshed their canvas trainers to the hipper tempo of ‘Divine Hammer’, I bit my beard-encircled lip, clawed the fingernails of my crossed arms into the sides of my M&S Blue Harbour cardigan and thought to myself "I bet they’ve never even listened to Title TK... THE IGNORAMUSES!"

For I, ladies and gentlemen, am a connoisseur, a connoisseur with tastes far more refined than you masses with your love of loud, obvious chord progressions and eager anticipation for the next National record. And as any connoisseur will tell you, Last Splash may mark the commercial high-point of The Breeders’ career, but it was Title TK on which they hit their creative peak. Currently enjoying its 11 year anniversary, Title TK is not being played live in its entirety or reissued on limited edition palladium vinyl with 600 bonus demo cuts. Which is a shame, because for me it the quintessential Breeders record and one of the greatest, most underrated items of the 4AD catalogue.

Title TK was released in 2002 after a nine-year hiatus which saw The Breeders dabbling in side-projects, rehab, line-up alterations, and other procrastinations. When it finally saw the light of day, the record failed to make as big a (erm) splash as Last Splash in a world that had long since moved on from awkward alt-rock and acerbic grunge. How could this sad, barren, intimate record hope to be heard over the popular brashness of NME’s desperately contrived ‘New Rock Revolution’, the unthreatening solemnity of Interpol’s Turn On The Bright Lights, or Nellyville by Nelly?

Even many of the more favourable reviews were overtly dismissive. “It’s not bad,” sighed Pitchfork, exerting themselves to bestow a 7.4. They called it loose, ad-libbed, spontaneous, messy and, taking Title’s title a little too literally, “incomplete” (“TK” = “to come”). Uncut, meanwhile, wrote that it was “the product of a sloppy but inspired band enjoying the straightforward art of making a noise”. Yet the idea that Title TK was a bit of a shambles misses its real beauty. As The Breeders’ driving force Kim Deal explains (or tries to) in a documentary filmed around that time, “my perfectionism isn’t like a... doesn’t come out like a... it doesn’t, erm, what’s it called when it... something’s itself? It doesn’t... it doesn’t... erm... come out like an ELO perfectionism, right. It doesn’t come at all like that, no, that would bother me... yeah it is weird: ‘make sure you keep the gargle that I do at the front!’”

I mean, how could anyone have truly seen this meticulously shaped masterpiece as a shambles in the same year that saw the debut releases and first major tours by those princes of half-baked sub-Clash wankery The Libertines? In actual fact, Title TK moves in the completely opposite direction: it aspires to be a veritable anti-shambles. Yes it is rawer than Last Splash, but in other respects it is far more restrained and considered. It is weirdly sparse and minimalist with The Breeders simmering off any excess fluid to reduce their sound to a strong, sharp jus. I don’t see Kim Deal knocking this stuff out with a distracted “that’ll do” nonchalance. I imagine her hunched over her drawing board electric guitar frowning and brooding, rubbing her temples, chewing a pencil, working, calculating, dictating, crafting, crafting, crafting... She is like the great impressionist-cum-abstract painter Piet Mondrian (1872-1944): distilling, sanitizing, breaking the form down to its barest minimum, trimming it to its logical conclusion, to the neatest-but-still-expressive blueprint, making sparing use of the most primary elements, unafraid to leave large, white, empty spaces, desperately searching for some semblance of natural order and harmony hidden in the overwhelming chaos that surrounds us.

Of course, Deal selected the best (the only?) recording engineer capable of capturing such a sound. Title TK saw the return of the almighty Albini who had also produced the band’s debut Pod (the pseudo-connoisseurs choice of Breeders’ best).

The record opens with ‘Little Fury’. There’s a quiet cough (or gargle?). A simple drumbeat backs the Deal sisters’ a cappella vocals. Almost a minute goes by before a guitar turns up, and even then it creaks rather reluctantly. The words, “Round up holler girl / Ah I will sing / Title TK / If I don’t black out / Dumb made for fucking / And missing from the party / That boy spun out... Grindcore little fury / I feel hot tire...”, what do they mean? It’s poetry. Beat poetry. Cut-up. Burroughsian. “My big drum / On your big face / The one-eyed jazz / As hickeys fade (fade)”. Somebody considers unleashing a guitar solo, yet its notes are few and the vocals kick back in before it has the chance to go anywhere. Is it a solo or a riff? Whatever it is, it flicks its middle finger at other solos and riffs, exposing them as absurd, flamboyant, shallow fripperies. I’m not part of that club, it says.

Thereafter, genre conventions are further subverted, streamlined, satirised and slashed. ‘The She’ gently funks things up with its groovy bass but is similarly skeletally bare. The guitar seems afraid to interrupt the wheezing, knackered organ, so it waits for a pause in its knackered wheezing to knock out a few gaunt notes and then disappears again. ‘Sinister Foxx’ also possesses a sort of swaggering, swinging minimalism and is adorned by the mysterious chorus of “Has anyone seen the iguana?” ‘Too Alive’ is more upbeat, the guitars get strummed recurrently rather than sparingly, warily prodded and poked, yet they are drowned in Albini’s mix by the oppressive splashing of the noisy cymbals. ‘Forced To Drive’ flirts with The Pixies’ triumphant quiet-LOUD-quiet structure and screeching guitar tones but holds back from becoming too preposterously loud and has one distorted section where it feels like someone should start singing but nobody does. They wait for a few bars instead. ‘Put On A Side’ begins with some enthusiastic, vigorous strumming as if introducing a rocking number. Instead, it makes way for deep, dark, flopping bass, hushed vocals and twinkling strings. At 1.28 there is a distorted chug. At 2.29 a drum-roll. Neither of these introduces anything, continues or reappears. They just pop up and then evaporate like accidental fireworks. But even if these noises were created by mistake, they were kept in the mix for a reason. What reason? Purity perhaps, for surely this album is the sound of the Deals at their purest. The poppiest number, ‘Huffer’, closes the album, as if tacked on the end as an afterthought, its sarcastic “Na-na-na-na-na”-ing a hollow reward for any fans of catchy bounciness that might have somehow managed to make it this far.

Of course, ‘Off You’ is Title TK’s greatest moment, The Breeders’ greatest moment, one of alternative music’s greatest moments. Sadness and intrigue pour out of this frail lullaby in a way unlike any other record. Has any voice sounded so cracked and fragile as Deal’s delivery of the words “I tried” at 1.18? Blink and you’ll miss them. Why is there a bizarre solitary synthesiser splodge at 0.42? “I am the autumn in the scarlet / I am the makeup on your eyes”. What does she mean? “Of all of my mistakes / I think I lent you late / Now every set percent seem to come my way / But I’ve never seen a startlet (sic) / Or a riot, or the violence of you”. I have no idea what this song is about. You don’t have to understand a song for it to bring you to tears. I read somewhere that it’s about moving to Nantucket. What I do know is that it is one of the most beautiful things that you could ever have the privilege of entering your earholes and anyone who says otherwise I will smash in the face with a broken minidisc player tut at fairly sternly.

I think ‘Off You’ might be about absence. I think the theme of the whole record (if indeed there is one) might be absence. Title’s title is not idly unfinished but deliberately both present and astray. Cut-up lyrics mislay words, phrases, expression, consequence. Noises emerge only to vanish again, momentarily or permanently. Things happen too late, too early, or not at all. With this intensity of fleetingness and severance, the record could be about being abandoned, or abandoning another (perhaps by exiling oneself to hermitic Nantucketian isolation). About parts of yourself or parts of another that you were sure would always be there but can no longer locate. About losing things and making do, or about discarding things on purpose because that’s what needs to be done to move forward.

Then again, it could be about a missing iguana. Has anyone seen the iguana? You haven’t? Never mind. But can you spot the iguana-shaped crack in the wall? It’s there for a reason. Kim put it there. It’s where the light gets in.

Facing the Other Way: The Story of 4AD by Martin Aston is out this week, published by HarperCollins imprint, The Friday Project.

In Photos: Soundgarden @ Manchester A...