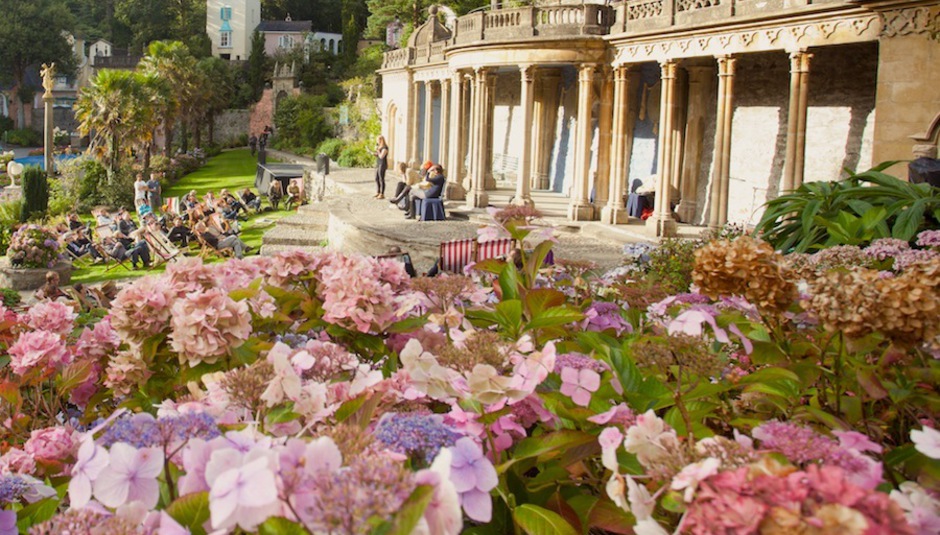 Introducing itself to the UK festival scene last year, Festival No.6 has already made a great many friends thanks to its unique spin on the standard three days in a field. Alongside a 6Music-friendly line-up and some Latitude-esque talks, workshops and street food stalls, the main thing that’s got people talking is the location – Portmeirion to be exact, the beautifully surreal village on the north Wales coast where The Prisoner was filmed.

It’s this location that cements the many good things about Festival No.6, but it's also behind the few negatives that stop it becoming an instant addition to the calendar for next year. If you haven’t been to this particular part of Wales before, or if you’re unfamiliar with The Prisoner, the village of Portmeirion itself is pretty awe-inspiring on first impression – the grand piazza at its heart, the colourful, Italian-inspired buildings that are crowded into its tiny streets, the majestic sweep of the surrounding White Sands Bay, all combining to give the impression of somewhere really special.

During the day, the ways in which this location is woven into the festival itself is really impressive. Wander into the woods on Saturday, and you’ll find a stage hosted by Moshi Moshi, with Sweet Baboo enthralling an early-afternoon audience with his darkly humorous folk-pop, before Teleman and The Wave Pictures add a layer of wiry tension as the sun sets. Wander further, and you’ll either find kids being taught how to make their own ewok fancy dress, or a bunch of thirty-somethings gurning their way through a full on rave.

Alongside this, there’s all manner of other activities to get involved in that would set your broadsheets aflutter - specially commissioned classical pieces; Guy Garvey in discussion with Stuart Maconie; Tim Burgess hosting a coffee shop-cum-gallery-cum-disco.

Of course, you can get this type of stuff at Latitude, End Of The Road and Green Man as well, not to mention Glastonbury’s vast array of extra-curricular activity, but I don’t think there can be too many complaints about more of this type of thing being on offer to the average punter, in comparison to the pack-them-in-and-get-them-pissed design patented by your Readings and your Ts.

If you take all of this away and look at Festival No.6 from a purely musical angle, there’s also a lot to admire, with highlights across the weekend coming from the increasingly assured Dutch Uncles, Neon Neon’s politically-charged electro-pop, the atmospheric angst of Daughter and the wonky Dr.Who-isms of Public Service Broadcasting. Fans of more challenging fare could also find the likes of Mount Kimbie, Melt Yourself Down and These New Puritans providing ample opportunity for a chin stroke and a head nod amongst the more radio-friendly acts.

With the bigger names, there was more of a mixed bag over the three days, with some acts more suited to the celebratory nature of a crowd thrown between sunshine and extreme weather warnings than others. Nile Rodger’s Chic absolutely steam-rollered their way through Sunday evening thanks to their unique mix of polished musicianship, star quality and an embarrassingly rich catalogue of songs. Johnny Marr belied his reputation as a lifelong sideman by combining some glam postering with a daring raid on The Smith’s finest.

Manic Street Preachers just about came out on top as they looked to balance their new, introspective album tracks with The Hits, although the numerous choices from the ponderous This Is My Truth, Tell Me Yours (released 15 years ago this week) nearly tipped them into the red. Thankfully, the usual Manics tropes won out in the end – hard graft, a touch of glamour and a fierce dose of that particular Welsh passion sending the remaining crowd home happy.

The other headliners weren’t quite as captivating, and they perhaps underlined Festival No.6’s key weakness. James Blake was a gamble of a booking, and his downbeat nature didn’t really suit a Friday night crowd eager for something to connect with. The same could be said for My Bloody Valentine – it might be sacrilege to criticize this most holy of holies, but they’re simply not festival headline material. Those enraptured by their brutally blissful noise clearly enjoyed the set, but for the rest of the crowd it’s all pretty impenetrable without a hit or anything resembling stage presence to cling on to. Are they and James Blake the headline names that will make people jettison Latitude or Green Man? I’m not sure, especially given that all that clamoured to see MBV’s return probably already did so last year.

This also brings the site itself back into focus, and the effect that it had on the latter part of the evening. Portmeirion itself closed midway through the evening, meaning that all the action then took place in the accompanying arena. If you weren’t a fan of the main headliner or the numerous DJs in action, your choices were limited – that might seem like a petty complaint, but when your target market is that slightly older audience who like a book reading as much as a banging donk, it’s good to have a broader range on offer right to the end of the day. To see people streaming out of MBV in search of alternative entertainment was to see a missed opportunity for Festival No.6.

If that all sounds like a massive negative, then it shouldn’t do – Festival No.6 should be seen as a major success, especially given the way it battled through the elements at certain times over the weekend. The organisers have got some aspects nailed down, with a location to rival any other festival and an attention to detail that makes the audience feel like an invited guest rather than cattle to be processed. However, the festival is throwing itself into an already crowded market, and the audience they’re looking to attract will always veer towards the events where they can get the most for their money.

"A perfect combination of being terri...