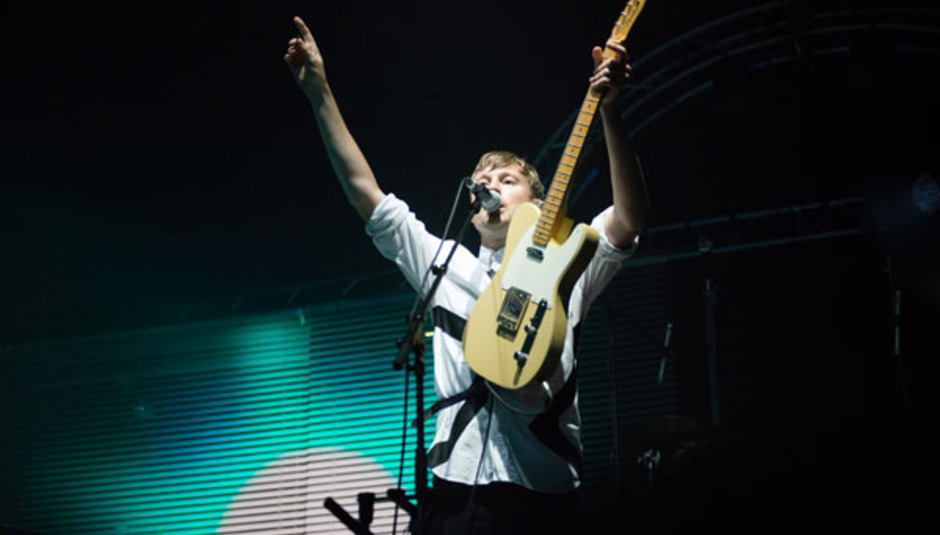 Colin Newman poses an interesting question when we ask him how his band fit in to this year’s Beacons Festival bill – 'Does anybody fit in?' is the Wire frontman’s response, and we’re not sure how to answer.

There’ll be more to come from Newman and guitarist Matthew Simms, both in the course of this review and in an interview DiS conducted at Heslaker Farm. For now we’ll stick with the question – does anybody fit in at Beacons?

It’s certainly difficult to quantify the common threads that run through this year’s headliners. What unites Bonobo, Local Natives and Django Django other than the fact that they’re celebrated without being celebrities? Are they all insiders with the outsiders? Is it that they’re making electronic/rock/pop music that takes influence from their peers while standing distinctly separate from them? Or is it is just that they all get played on 6Music?

The question permeates throughout the bill, right down to the first acts on the Friday. Each takes influence from bigger bands and tiptoes towards their own sound, and each one does it differently, with varying degrees of success. Fun Adults for example, who open the Loud And Quiet stage, are one of a growing number of bands we’ll describe as 'post-Alt-J', with their affected vocal style, pseudo-folk twangs and sparse, spiky percussion. There’s more fun to be had with Big Deal, who’ve outgrown teenage Americana to become a(nother) great new rock band that livens up slacker shoegazing with tight grunge melodies.

It’s Egyptian Hip-Hop who provide the weekend’s first real moment of excitement though, when ‘Tobago’ takes a tiny trio of notes and builds it into the most mesmerizing groove as singer Alex Hewett wanders round the Loud And Quiet crowd like a futuristic nomad. Somewhat less memorable, but equally absorbing are Nope, whose two drummers tear through motorik beats as the other half of the band find the perfect central point between punk and psych on the You Need To Hear This stage.

If there’s one thing DiS learned at Beacons this year, it’s that the only thing more trying than having to constantly say 'I’ll meet you at the You Need To Hear This stage' is watching Only Real play on the You Need To Hear This stage. The summery bedroom project of 22-year-old skateboarder Niall Galvin becomes Jamie T with a flange pedal when it’s recreated live, so when Leeds hardcore heroes Eagulls arrive onstage a while later, they’re comparatively thrilling, even if their sound seems to have flattened somewhat since we saw them last.

Luckily, TRAAMS deliver just the sort of show we’re after. They’re phenomenal: a series of scuzzy garage-rock masterpieces, interspersed with Krautrock jams that repeatedly push you to your breaking point. When they finish, TRAAMS leave a tent of rocking torsos to wonder, how they can ever recreate what they’ve just felt, how did they not notice how sweaty they were getting, and how can a trio from Chichester possibly have just replicated Neu! and Nirvana at the same time? They actually manage to make stage headliners Fucked Up look a little dull, not that Pink Eyes and co. do anything to suggest they’re not still the most fun punk rock band on the planet.

On Saturday, there’s more grunge early on at the Loud And Quiet stage in the form of Wolf Alice, whose set is enjoyable enough until they close with ‘Fluffy’ – a track with such brilliant stop-start hysterics, it almost seems a shame that they didn’t spend the previous half hour playing it. Spectrals follow with charming renditions of lovingly retro pop songs that would sound perfect in the summer sun. As it happens though, it’s pissing it down, and DiS ends up spending the worst of the rain racing round the site trying to locate members of Wire and getting completely soaked in the process. We eventually trace the post-punk legends to Loud And Quiet, where we embrace a few minutes of Stealing Sheep’s blissfully experimental folk before wading our way to the press tent.

We make sure we’re back in time for Dutch Uncles who, against all odds, have become one of the best festival bands in Britain. They’ve made songs with multiple time signatures into pop anthems worthy of any main stage and by the time they reach their standard closing track – a sublimely surreal cover of Grace Jones’ ‘Slave To The Rhythm’ – we’ve lost count of how many moments of genius we’ve just witnessed.

Fittingly, it’s still raining when miserablist-in-chief Malcolm Middleton starts playing at the ELFM stage – a sort of mini circus tent on the far side of the campsite – but the downpour fails to distract us from the realisation that Middleton is one of the most powerful and poignant narrators of our time, with his performances of ‘Blue Plastic Bags’, ‘A Brighter Beat’ and ‘Devil And The Angel’ proving it indisputably.

As we head back down to the main arena, we’re wondering what Wire might have in store for us – a Dadaist cabaret like the one controversially documented on 1981’s Document And Eyewitness or an uncomfortable performance by a legendary band that’s seen better days? In the end it’s neither: they start a little sluggishly, but once ‘Adore Your Island’ and ‘Magic Bullet’ from this year’s superb Change Becomes Us album are revealed, it’s clear that Wire are still one of the UK’s most exciting contemporary bands, becoming sharper, more severe and more vital than ever as their set goes on.

(Incidentally, anyone who was after a fix of early Eighties Wire-style fucked up cabaret would have been best off spending their evenings at the Impossible Lecture tent. That’s where we found ourselves in the early hours of Sunday morning, watching a woman jiggle her belly and bottom fat along to the vibrato of Édith Piaf, randomers doing terrible covers of ‘Flowers’ by Sweet Female Attitude and ‘Call Me Al’, and a surly bloke in a hi-vis jacket aggressively reading out a personality test as a piece of experimental theatre – everyone hated that last bit, but that was probably the idea.)

We arrive back at the arena on Sunday to find Sky Larkin being given a pretty shit deal, literally – the arena only opens a couple of minutes before they start playing because the toilets were still being cleaned up from the night before. Nonetheless, this is a band sounding better than they ever have, with opener ‘Still Windmills’ still sounding like one of the most creative three-piece indie singles of all time, and new tracks like ‘Loom’ and ‘Motto’ making it clear than the band’s distinctiveness in no way detracts from their ability to write clever rock songs full of heart, life and meaning.

As expected, Hookworms put on the most powerful show of the weekend, as singer MJ completely loses his shit to the dense, devastating fury of the band’s sound. He yelps off-mic like he’s desperate to be understood but can’t bear it either, putting more emotion into his delivery than can be considered safe. It makes the altogether more controlled psychedelics of Moon Duo look all too tame when they follow half an hour later.

Over on You Need To Hear This, Best Friends play their infectiously fuzzy beach-pop like true pros – when bassist Ed Crisp busts his guitar strap in the first song, he doesn’t miss a note! – but it’s Drenge who look like the stars-in-waiting, playing weirdo rock ‘n’ roll full of warped imagery, furious riffs and an unbelievable amount of charisma for two guys in their early twenties. The same can’t be said for their fellow blues-rockers Wet Nuns, whose half-serious heavy metal shtick doesn’t come close to matching the glorious, delirious depravity of Drenge.

Savages play a show that’s stranger still, not least when singer Jehnny Beth uses the breakdown of ‘Hit Me’ to describe her masochistic fantasies in alarming detail. Ultimately, this is another band at the peak of its powers, making each show into a spectacle and each song into an urgent mission statement. Every note, beat and lyric is so loaded, Savages are impossible not to get swept up in – truly, it’s hard to imagine what they could do to be any better than this.

Perhaps it’s that desperation to stand out from the crowd that Savages and all the other great bands on the bill have in common? It’s certainly true of Django Django, who turn up to headline the main stage with their dorky matching outfits, geeky visuals and goofy between-song chit-chat. It’s a shame their show takes a while to get going, as the guitars on ‘Hail Bop’ sound like they’ve been plugged into mattresses rather than amplifiers, and Vincent Neff sounds like he’s singing from another stage. The day is saved early on by Tommy Grace, who turns ‘Waveforms’ into an unforgettable electronic odyssey, though he could easily be crushed by the towers of synths teetering around him.

What follows if four art school boys blaring air horns, jamming with silly Egyptian melodies and generally putting on the least pretentious closing show imaginable. It’s unlike any festival headline slot we’ve ever seen before, and you know what? Django Django fit right in.

"There's every chance our next record...