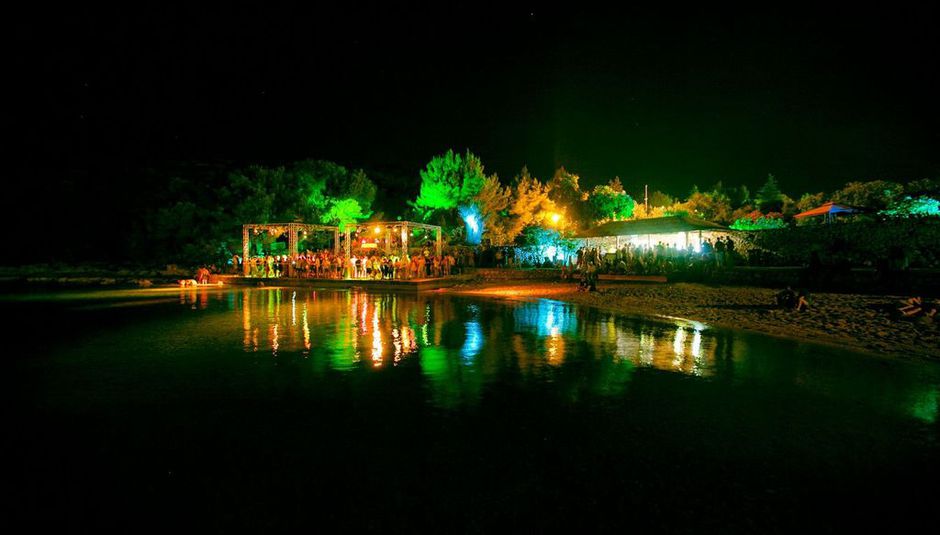 It is about 11pm on a clear, warm starry Friday night. My friend and I are trying to find the Garden Festival in Tisno, Croatia, but unfortunately we are idiots and have attempted a shortcut that has led us up the large, shale-covered, thorn-thicketed hill. The only light sources we have are starlight and our mobiles, and we have somehow wandered to such a point that we can’t retrace our steps (too steep) and really sharp bushes forwards block every potential route forwards. Exhausted after 45 minutes of scrambling about like utter, utter idiots, we can hear – mockingly clearly – the soulful sound of the Crazy P Soundsystem wafting up from the festival below. It sounds nice, which only compounds our despair. Eventually we simply shove our way through thorns, accepting the lacerations, until we eventually find a road, which leads to the festival.

Everyone there is British (well, a lot of them - the organisers have asked me to point out that around 30 nationalities attended), about ten years younger than us (students, basically, though again the organisers would like it be be known that puters as old as 50 were in attendence) and has clearly spent much of the last year buffing themselves to a polish in the Uni gym. As we arrive, Crazy P has ended and DJ Greg Wilson is playing deep house remixes – I think we get a Seal song, a Nenah Cherry song, and something by Michael Jackson. Bleeding, sweaty and with our systems overloaded with adrenaline, we each decide to shotgun a bottle of coke. This is a terrible idea, as our feeble innards reject the invading steam of bubbly sugar and we both chuck up warm cola in front of some people who were born in 1995, who look at us piteously.

Still, maybe it’s the shock to the system that my weak body needs, as post chuck up, things look up.

Founded in 2006, Garden the very first of the boutique summer festivals set up in Croatia by enterprising Brits who’d cottoned on to the fact that Croatia – which enjoyed a particularly terrifying Nineties – was now safe to visit, prodigiously beautiful, warm in summer, and possessed of a disproportionately large coastline. Success has led to a change in site, a longer festival and a measure of growth, but Garden remains determinedly boutique, with a capacity of just a couple of thousand. This year it took place in a twinklingly pretty old holiday camp by the sea, just outside of Tisno itself, a pretty town that straddles the Croatian mainland and the island of Murter. We stay in Jezara, the next town along the island, and it would be remiss of me not to say how utterly fucking lovely it all is, a tourist friendly but not actively touristy town replete with nice seafood restaurants and chilled out little bars, and above all, stunning views out over the calm Adriatic Sea. If Garden achieved nothing else, it got us to visit a beautiful part of the world that we simply wouldn’t have gone to otherwise. Fortunately it achieved considerably more. And for anybody still reading at word 500: I got free tickets for writing this review, but no flights or hotel or kickbacks from the Croatian tourist board, so being impressed with the surroundings wasn’t a contractual obligation. It’s lovely there.

As for the festival – well yes, it’s full of young English people, the majority of whom seemed to be celebrating the end of the university year… I guess maybe it would have been nice to think I was having the world’s most authentic Croatian experience, but you know, fuck it, I’m not sure having a nice beach party for a couple of thousand well-behaved clubbers really constitutes a gesture of egregious cultural imperialism.

And it really is nice. The actual outdoor dancefloor areas are not astounding points of natural beauty, but the site – decorated with multi-coloured lanterns, set by the sea – is enchanting, the staff are friendly, and in possibly a global first, it has a really, really good restaurant. Hardly any punters attempt even the most basic bits of the lingo - helpfully provided on the back of the programme - but they’re a generally nice crowd, fuelled by end-of-term enthusiasm and expensive-but-strong pills. It is very clean. It is very, very well organised. And the music is good, and surprisingly eclectic given the festival’s house-centric reputation. Obviously the festival has a modest budget for acts and household names are in short supply, but there's some smart bookings. In Wilson’s slot the following night, Metro Area spin an altogether more robustly satisfying set than their predecessor, followed by a cheerily raved up, old skool anthem-heavy set from Eats Everything that seemed pretty reasonable at the time, all told.

The evening on site ends at the civilised hour of 2am, which may indeed be enough for anyone who may have been out since noon, when the first act is on each day. But there is a nightly afterparty at Barbarella’s Discotheque, an outdoor nightclub that there’s a coach laid on to from the main festival area. After the moderately lengthy drive, it’s mildly amusing to note how similar the club feels to the main area of the festival, only it happens to be open until 6am. It is good fun, though: Beats in Space do sterling work on the Friday, teasing us with the bassline to ‘I Feel Love’ for what feels like three epically coy hours, while the next night’s Resident Advisor-curated event adds a bit of weirdness into the mix via let-of-centre-interventions from Floating Points and, er, Thugfucker.

I am a total mess by the Monday, but rouse enough strength to go to a late party on a boat, which pootles around the water for a few hours while folks from Claremont 56 spin tunes to an infectiously enthusiastic crowd. Most of them are topless and hammered, which I am not, but their enthusiasm is enjoyable, and actually loitering on a boat in azure waters as the sun gently sets is you know, good.

I find the festival and the holiday intrinsically bound up within each other - if it was somewhere ugly or industrial or near a big city, I'm not sure Garden's determined smallness would seem like quite so smart a move. But give me this good-spirited, beautifully put together little festival over frugging away sweatily at some superstar DJ-heavy enormofest any day. Garden is small enough for a couple of idiots to get lost on the hill next to it, and long may that continue.