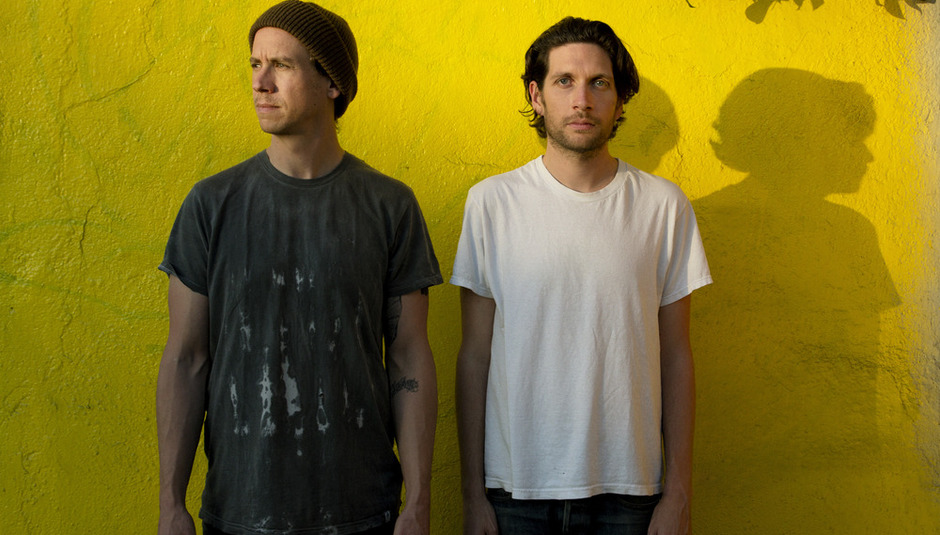 Planet Gear: No Age on the making of An Object + Album Stream

Planet Gear: No Age on the making of An Object + Album Stream

These eleven tracks, produced by No Age and their long-time collaborator Facundo Bermudez, are meant to be grasped, not simply heard. Whether in the fine grit of Randall’s sandpaper guitar scrapes on “Defector/ed,” or Spunt’s percussive stomp and crack on “Circling with Dizzy” and “An Impression,” created largely through the direct manipulation of contact mics, these are songs that pivot on the sheer materiality of music-making.

Here, Dean and Randy talk us through some of the gear that went into the making of the album...

Here is a picture of a key piece of equipment we used on our new record An Object - a contact microphone with a 1/4" output made by Cryptic Carousel. I started messing around with these in place of drum sticks, as an extension of my hands and as a way to obliterate the distance sound has to travel to a microphone from a specific source. I found if I tapped the microphone directly it would negate the drums, which is what I wanted to do for the whole record, but eventually found a comfortable space in the middle. By scraping these on cymbals, hitting blocks of wood, tapping them on my body I was creating rhythm that on one hand sounded very mechanical, almost drum machine like but still retained a human element. I could have achieved a similar result playing an electronic drum set or an spd-s drum pad, but I wanted to get away from the instinctual pattern of drumming as much as i could and with these microphones, each tap will be different, even if I am completely accurate, it is in the contact mics nature to be inaccurate.

The chain wallet remnant (like one from a Harley Davidson leather wallet or a truck stop gift that would feature a pot leaf or some sort of trucker speak inside joke embroidered on it) is how I am producing the high end hits for the live show. The "bass" sound is my right leg right above my knee, as the left doesn't have the same low end as the right leg (I believe it has to do with the extra muscle i gain in my right upper leg from constantly hitting the kick drum and also an accident i had years ago. I had to have extensive ultra sound work done on this leg and my knee right where I am hitting the contact mic.) and a pair of blue jeans (denim has a lower tone than cotton slacks, cotton slacks sound more "thwacky" and less "punchy" and I also believe the indigo blue, which is extremely rich in color produces a more desirable tone, rich in low end than say a pair of white jeans or blue denim mixed with 2% spandex). The snare pictured is the same snare drum I have had since I was 16, which I got from a friend long before I started playing drums. This snare is the only one on our new record.

The two pieces of gear that I am most psyched to write about that I used while making An Object are: The Kaleidoloop is a fun sound toy almost. It has a mic the sticks out of it like an antenna and you can record anything and replay in forward or backwards at varrying speeds. It almost sounds like a vinyl record scratching or an analoug tape loop being pulled through a tape machine. the out put in either through a small built in speaker or out of a 1/4" jack that you can then run through effects. It can really be heard on the intro to "An Impression" and the entire song "Running from a GO GO" was mainly made up of a slowed down reversed effected guitar line from " An Impression". I just kept fucking around with this thing the whole time we were recording. It was fun trying to make backwards satanic messages with it.

Check out the cool "how to use the kaladaloop" on the their website. Very cool company and a very cool box.

The Roland Spirit 10 A solid state practice amp is something I found on tour years ago in Portland Oregon at an awesome gear shop called Trade Up. I left the price tag on. As you can see it was a steal for $50. I like small amps with small speakers and 1/4" head phone out jack because you can plug the head phone out in to the input and usually create a fucked up feedback loop. You can also put whatever effects in the loop chain. I usually put some type of delay and eq to manipulate the strait tone signal. It usually sounds like a type of oscillator like you hear that sounds like bird chirps on "An Impression". But really what is super sweet about the Roland Spirit 10 amp is that withe over drive turned all the way up it totally sounds like Greg Ginn (Black Flag) Damaged era guitar tone. It is not as loud as a full stack but when you are recording you don't need the guitar to be the loudest thing in the room. you just need a great tone and then you can turn it up in the mix. This little bad ass amp had a raw gritty but still enough low end awesome sound. I played it on almost every song. Also, a lot of the songs were written playing out of this thing. I would usually plug my out of tune Silvertone guitar into this thing and just jam out ideas with dean on the drums. It def didn't sound like other guitar set ups I had used in the past and let Dean's mind wander around until he hit on something that he could get down with then I would fill in the guitar parts later in the recording. But the Spirit 10 A let me keep the guitar parts simple and bad ass sounding in the beginning so that we could create a good base to work off of. Check out the link for a message board discussion on how cool this amp is and also to download the manual which looks super cool 80's electronics diagram style.

An Object is out on 19 August via Sub Pop.