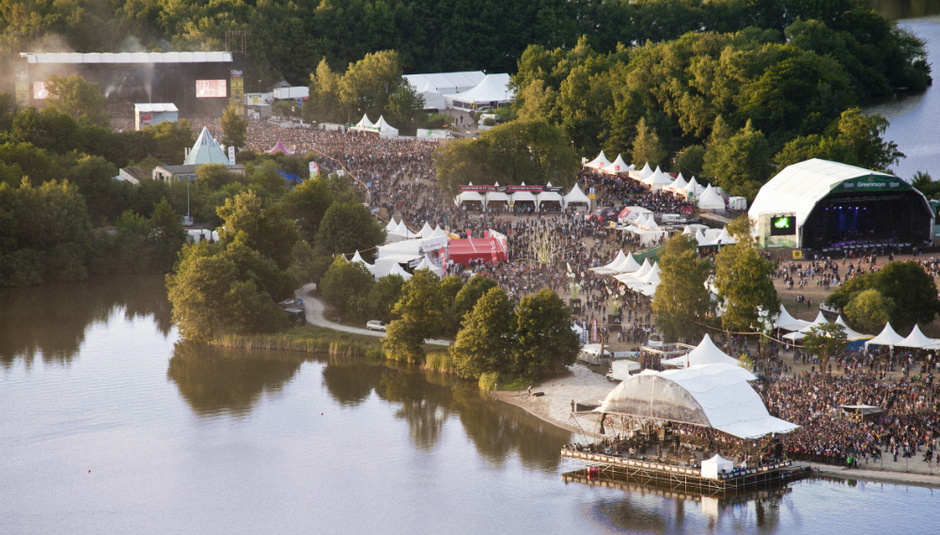 You join DiS on a beach, in France. Diplo is zorbing across a heaving crowd in front of us while the rest of Major Lazer recreate the sound of a World War II air raid and blast it out of the PA system at an ear-splitting volume. Minutes later they'll lurch into a monstrous rendition of the 'Harlem Shake'. We're 99% certain this would be horrendous to experience sober. As it is, the following words burst forth from our lips, "This. Is. INCREDIBLE!!!"

Considering we sat through 20 minutes of Jamiroquai earlier without hearing 'Virtual Insanity', Eurockéennes 2013 has got off to a cracking start.

Set in Belfort, just under an hour's drive from Basel airport over the border in Switzerland, this 127,000-attendee-strong festival is blessed with temperatures of 27 degrees celsius and searing quantities of UV rays. It's a brutal combination for a pastey Brit, but the locals love it.

On our first day of arriving, Eurockéennes adorns the front page of the local paper via a hulking picture of Crystal Castles' Alice Glass. Something tells us she might not have fared so well in last year's sweltering heat, and by 4pm on Saturday the sun has caught up with us too. What began as an attempt to watch Mykki Blanco quickly deteriorated into an unintended mid-afternoon nap that's interrupted only by the vulgar strains of Dinosaur Jr.

While we breath a sigh of relief for liberally slapping about our Factor 30 an hour ago, J Mascis, Lou Barlow and the other one go about mixing cuts from I Bet On Sky with old favourites in the vein of 'Freak Scene' and 'Just Like Heaven'. They're as ferocious as ever, even if it's not the greatest slot they've been handed with electro-harbingers Is Tropical on immediately afterwards.

Questionable scheduling, at least to our British eyes, is a running theme throughout Eurockéennes 2013. As it's the festival's 25th anniversary, it's been drawn out into four days with a line-up that sags at times. Warming up for Phoenix on the main stage are Two Door Cinema Club who draw a massive crowd. They end up playing for an hour and 15 minutes, meaning their set quickly falls into a Bloc Party-lite rhythm where hits like 'Something Good Can Work' and 'I Can Talk' lack the impact to sustain our weary feet. Compared to Alt-J, who played the day before at least, it's hard to fathom what smidgen of fresh innovation Two Door Can wring from their sound. The most memorable occurrence in their set is frontman Alex Trimble's white suit and nose ring costume combination; a bold but fraught choice of outfit.

Alt-J on the other hand, seem poised to further raise their game after nabbing the Mercury Prize for An Awesome Wave. 'Breezeblocks' ripples with rhythmic finesse as the sun begins to clamber down over the beach stage, while 'Matilda' sparks a sea of bopping limbs in the evening breeze. It's a thoroughly impressive outing from the Leeds-based quartet that's even more endearing for keyboardist Gus Unger-Hamilton's crowd interaction in fluent French.

Another band who have no trouble with the language barrier are Phoenix. Making full use of their hometown advantage they open at midnight on an imperious triple threat of 'Entertainment', 'Lasso' and 'Lisztomania'. Thomas Mars and co. go on to recite almost exactly the same setlist they've been trading on since Coachella in April - but what a setlist it is. Offering a fairly even split in material between the best of Bankrupt! and Wolfgang Amadeus Phoenix, it's a spectacular showcase of a band at the very peak of their powers.

This is the kind of rapture The Smashing Pumpkins can only dream of inspiring. Their headline set on the Friday is marred by a overwhelming wave of indifference emanating from Billy Corgan's great bald head. In fairness, the band of assorted session players he's assembled for the summer festival circuit are technically infallible. It's just a shame the new material they're obliged to run through from Oceania and Zeitgeist is so nondescript. The anthemic bombast of 'Today' and 'Bullet With Butterfly Wings' rouse a clenched fist of approval from our tired arms but if Billy wants any more celebratory gestures he'll have to come up with something special. Alas, his heart's not in it and a competent one song encore of '1979' means ours isn't either. We were more enthusiastic about the pedalo ride we had around the festival's surrounding lake on Saturday. Wellington boots be damned, a bicycle-boat is clearly the finest method of transport by which you can experience Eurockéennes. Having only attended British festivals before, it's remarkable how much the event's stunning hillside scenery contributes to your overall happiness. ATP in Pontins has many things to recommend about itself, yet you're unlikely stop and stare in wonderment for half an hour as a hot air balloon flits across a sunset skyline.

A$AP Rocky is fixated with natural beauty of a different kind. "I came to party, get drunk, get high and fuck someone's girlfriend," he declares with unnerving sincerity before going onto demonstrate exactly how much of a disappointment Long.Live.A$AP. was. With the uber-hip production of 'Wassup' and 'PMW (All I Really Need)' dampened by high winds and a lethargic crowd, his tired wordplay is wholly shown up. He asked for "slam dancing" and "titties", by the time we left neither were forthcoming.

This disappointment spills over into Sunday too. Word on the scorched turf is that Andy Murray has won Wimbledon and we were indisposed at the magic moment. We'd dashed across town at the end of the match's second set to arrive in time for The Vaccines.

Infuriatingly, Justin Young and his well-coiffed cohorts arrive on stage 55 minutes late blaming their tardiness on missing gear. To ensure their catchy indie-pop was given a fair hearing they had to borrow Palma Violets' gear. Having waited for so long to hear the pleasant jangle of 'If You Wanna' and 'Blow It Up', we were fully prepared to scowl our way through the set. Somewhat infuriatingly we found ourselves still singing the words to 'Teenage Icon' 15 minutes after they'd left the stage. To add insult to injury, their new lo-fi infused song 'Melody Calling' is undeniably brilliant.

Sunday continues this heady mix of agony and ecstasy by forcing us to choose between Chvrches and Tame Impala as well as Disclosure and My Bloody Valentine. Having born witness to Chvrches' first London show, we feel duty bound to witness how far they've come since. A long, long way is the answer, with 'Gun' and 'Recover' meeting with a rapturous reception given they've barely scraped the surface of popular consciousness. 'The Mother We Share' is still best, but most bands carve out entire careers without matching its tremulous heights.

Then... Disclosure who meet with our instant disapproval for daring to be both younger and more talented than we'll ever be. The temerity of it all! Once we've gotten over our inherent narcissism we begin to shake our limbs to 'When A Fire Starts To Burn' and don't stop moving throughout a dizzying mix of old bangers and modern day classics from Settle. Slightly dehydrated and definitively delirious we head over to the main stage to end what's already been a spectacular weekend on a final high. It's been 18 years since Damon Albarn marched his band of scrappy Londoners through Belfort and anticipation for their climactic Sunday night performance is at fever pitch. The only two stock French phrases we've received a solid response to throughout the weekend have been: 'Une bière, s'il vous plaît' and 'J'adore Blur'. Naturally, the ground in front of Eurockéennes' main stage is awash with excitable faces 45 minutes before the Parklife titans lunge into 'Girls & Boys'.

Bearing in mind the hoo-ha around last year's Hyde Park-Olympic extravaganza, the one thing missing from Blur's set is a sense of occasion or finality. As the perennial 'will they ever release a new album' question continues to linger on, this reunited four-piece are clearly content to play the hits around Europe for a small fortune per headline slot. Since Glastonbury 2009, 'Fool's Day', 'Under The Westway' and 'The Puritan' have emerged; yet only 'Under The Westway' is deemed worthy of a public airing alongside 'This Is A Low' and 'Tender'. The sea of swayed hands that greet its plaintive piano chords indicate Albarn and Coxon really should book themselves into a recording studio sharpish.

In the meantime, everyone's favourite gold-toothed geezer is having a whale of a time dashing the crowd with bottled water during an incendiary 'Parklife'. For a man who'll pronounce "the mind gets dirty as you get closer to 50" during 'End Of A Century', Damon can't repress his troublemaking smirk for 'Country House' and 'Popscene'. Midway through 'Beetlebum' he stomps up and down so hard on Dave Rowntree's drum platform that it visibly shudders under all the excitement.

As tempting as it is to declare Blur should leave their legacy to rest, any show that ends with 'The Universal' and 'Song 2' is going to leave you aching for more (of the same). This crowd-pleasing prowess is shared by the organisers of Eurockéennes 2013 who've consistently shown two fingers to the hype machine in favour of acts who trade on mass appeal; you'll find the same ethos in England with V Festival.

Whereas a weekend spent in Chelmsford is our idea of hell, here in Belfort we feel quite differently. There are farewell fireworks exploding overhead and pangs of instant nostalgia in our belly. For four days in France, we found a fleeting slice of paradise.

In Photos: Rock For People Festival 2...