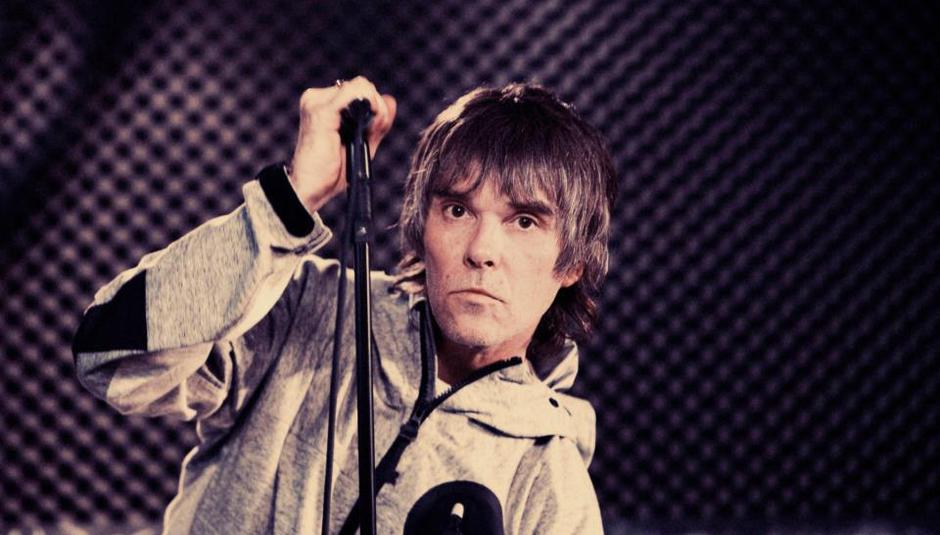 "It helps to share my nostalgia with you" sang Mancunian cult icons The Chameleons nearly three decades ago, and tonight, that communal spirit descends over Finsbury Park, with 45,000 hardy souls having almost brought London's underground transport system - and the overworked bar staff in the nearby Silver Bullet and Twelve Pins - to a weary standstill.

Yet this feels something more than just an excuse to wallow in tales of the past. Despite last summer's hugely successful Heaton Park shows, there's a sense that the four Stone Roses - Ian Brown, John Squire, Gary 'Mani' Mounfield and Alan 'Reni' Wren - still have unfinished business.

With talk of a new album in the pipeline; although no new material is aired this evening; and no sign of their return to the live arena grinding to a halt any time soon, it's been a pleasantly stylish journey since the band first announced their intention to get back together in October 2011. What's more, the atmosphere in and around Finsbury Park seems to be more good natured and less intense than in Manchester twelve months earlier. People's expectations may have been terse back then, whereas this time around it's a more knowingly jovial affair. Camaraderie ensues in every corner, and DiS engages in numerous conversations with random strangers who've travelled from as far away as Brazil for this weekend's long sold out shows.

Having said all that, there's still a sense of apprehension from the band towards the music press. Shane Meadows' recent documentary based around last summer's reunion shows Made Of Stone aside, it's possible to count on the fingers of one hand the number of band endorsed articles or features published since their return. Which is slightly disappointing considering the unanimous wave of positive commentary cast in their direction ever since that initial Heaton Park show last year. Even those expecting a musical car crash had to eat a slice of humble pie. Nevertheless, minor gripes aside - once again mostly revolving around beer and food prices and the lack of sufficient toilet facilities - the band can hold its head high once more. While the previous night's supporting cast erred more towards daytime Radio 1 - Dizzee Rascal, Rudimental and The Courteeners all appearing on the bill - tonight represents more of a history lesson in British popular culture from 1976 to the present. Most notably the inclusion of the two Johns (three if you include Squire I guess...) Marr and Lydon, there's a celebratory vibe running through Finsbury Park's grass verges and open spaces. Unfortunately, despite being arguably the most influential guitarist of his generation, Johnny Marr's attempts at replicating his former singer's vocals on Smiths classics 'Bigmouth Strikes Again' and 'There Is A Light That Never Goes Out' fare dismally. That reverb heavy intro from 'How Soon Is Now' sends shivers up the spine, and to be fair Marr's backing band - which feature former members of once-tipped Mancunians Haven among their ranks - are flawlessly taut throughout. Indeed, his solo efforts from recent long player The Messenger sound more appropriate than those aforementioned dalliances with his past.

However, John Lydon and Public Image Ltd are an entirely different proposition altogether. Confrontational yet controlled, and playing a set encompassing the entire PiL back catalogue. They're a joy to behold and while many purists still yearn for the 'classic' line-up of Lydon, Levine and Wobble, the current band has their entire repertoire nailed to a tee. 'One Drop' and 'Reggie Song' off last year's comeback record This Is PiL reminding all and sundry early doors they're still a potent creative force to be reckoned with. Big singles 'This Is Not A Love Song' and 'Rise' also make an appearance, the latter's now familiar refrain "Anger is an energy!" finding itself sang back to a smiling Lydon by several thousand pumped up souls. The band's first three records represented by the inclusion of 'Public Image', 'Death Disco' and 'Flowers Of Romance' respectively, with even a nod to 1989's long forgotten 9 in the shape of pulsating midset slow burner 'Warrior'. While at ease with his past, it's clear Lydon and co. still have so much to offer in the future, and in the current climate are a breath of fresh air.

As the now familiar strains of The Supremes 'Stoned Love' announce the arrival of tonight's headliners, it's not so much about whether The Stone Roses will actually turn up but what's included in the setlist these days. Rumours both 'Elephant Stone' and 'Going Down' have been rehearsal space regulars this year; the former's origins dating back to before bass player Mani even joined the band; are confounded when the pair make an appearance early on. While Ian Brown's vocals might not be pitch perfect, he carries them well for entire the hour-and-a-half his band are on stage. 'Ten Storey Love Song' tenderly executed, it's on the loosely orchestrated likes of 'Fools Gold', 'Something's Burning' and another brand new inclusion, 'Breaking Into Heaven' off 1994's Second Coming where the band; and guitarist John Squire in particular; come into their own. At times adopting the role of ringmaster hyping up the crowd, others dancing deliriously alongside his bandmates as yet another locked groove takes hold. Whether their main incentive for getting back together revolved around pound signs or not, it's clear the four of them share a chemistry on stage like no other. Whether it be Reni's jazz-inspired drum patterns, Mani's instantly definable basslines or Squire's virtuoso guitar passages, tonight's performance once again demonstrates why the return of The Stone Roses was vital in reinvigorating passion back into the UK's music scene.

All that remains to be seen is whether a new Stone Roses record will emerge. However, what does seem likely is they're not going into another hiatus any time soon. Not if this evening's enthusiastically buoyant show is anything to go by. And while their detractors will point at the nostalgic element of a Stone Roses live set, the sense of communal spirit between band and audience tonight is something unlikely to be witnessed at a Radiohead concert.

In Photos: Frankie &amp; The Heartstr...