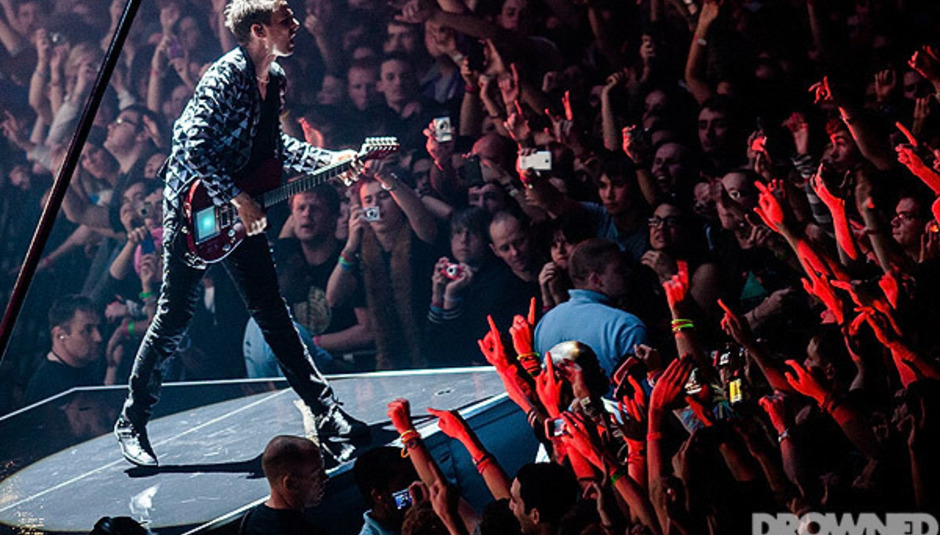 For all the perfectly valid critiques that can (and certainly have been) levelled at Muse over the years, conformity isn’t the first to spring to mind. For better or for worse, they’ve shown a clear reluctance towards maintaining one particular stance for any extended period. Yet, while most bands revert to a “back to basics” approach after a time, Muse have strode off preening in an increasingly unpredictable direction. Last year’s The 2nd Law arrived with an overblown blend of jet-powered riffs, Queen vocal melts and ‘Animals' era Floydian snarl against society (oh, and dubstep. Can’t forget the dubstep...) But as Sean Adams correctly pointed out in his review of the album, the latter-day incarnation of Muse don’t always need to be taken entirely seriously.

But albums are albums: Muse have forever lived – never died – on the strength of their live showings. Aside from the fact that technically speaking they are up there with the finest trios to have ever graced the stage (Matt Bellamy may steal the spotlight but most discerning listeners are aware just how supremely interlocked Chris Wolstenholme and Dom Howard are as a rhythm section), Muse have always taken pleasure in pushing the limits of their stadium shows. Be it the rotating radars at Wembley in 2007, the spacecraft from 2010’s outdoor tour, or their general peccadillo for pyromania and synapse-melting animations, they have always striven to match their musical gluttony with a show that befits it. And as such, their live appearances are typically things of excessive wonder: a band entirely comfortable inhabiting such colossally daunting surroundings.

Tonight proves no exception. Clad in the velodrome-esque curves of Manchester’s Etihad stadium, opening klaxons and calls to alarm fade into ‘Supremacy’ - kicking the throttle with myriad explosions and a ferocious guitar barrage. ‘Supermassive Black Hole’, ‘Bliss’ and ‘Knights of Cydonia’ revisit jaggedly familiar territories but their focus and drive in pushing both The Resistance and The 2nd Law shows that Muse now see more affinity with those last two albums than their predecessors (tonight, we get more songs from The Resistance than we do from both Origin of Symmetry and Showbiz combined). Yet, the denser topics contained within their recent works is neatly skewed here by a dark, playful humour and theatricality that hasn’t been present in many of their previous performances. Bellamy in particular implores and croons into the microphone like rarely before – playing to the camera and frequently rushing out to the platform in the centre of the arena to fire off another twisting, firestorm guitar solo. Even more grimly comic are their two on-stage character “deaths” – a businessman flinging money into the crowd before appearing to succumb to a heart attack during ‘Animals’ and a haughty, overworked secretary who drinks petrol (from an on-stage pump) during ‘Feeling Good’. Above them all, a huge bank of projections flit between a post-apocalyptic Optimus Prime energy matrix and swirling visual effects, all backed up by torrents of flame and smoke from chimney stacks above. Visually, it is almost overwhelmingly spectacular.

As a band, they’ve now reached the level where they are so embedded within their songs that they can juggle them about with ease. Codas are frequently transformed into hybrid squalls, abstractly referencing various classic rock tracks and the jam sections enmesh as effective bridges between songs. Most notable tonight is the focus put upon Chris, who as well as typically excellent bass work, even takes lead vocals on ‘Liquid State’ and lead guitar on occasions. It’s heartening to see and he clearly relishes having the spotlight. As with the rest of the tour, the final song from the main set is decided by an on-screen roulette spin. ‘Stockholm Syndrome’ wins at the expense of ‘New Born’ and the result is a frenetic and double-paced assault that leaves legs and ears equally wavering.

There’s an unexpected and glorious moment when they return for the encore with a hushed and stirring ‘Unintended’ before the band congregates in the centre of the field for a stripped-back section. That said, such section sees a 20-metre light bulb rise from the side of the stage and glide mystically over our heads during ‘Blackout’, only to burst open revealing an acrobat performing aerial gymnastics from beneath. And ‘Undisclosed Desires’ sees Bellamy – bedecked in electronic shades – clambering under the stage followed by the camera, to reveal the bodies of the businessmen in coffins underneath. Bear in mind: this is the supposedly “minimalist” section…

And then, just when you think that things have become bizarre enough, there is a 20ft robot on stage. Blowing carbon dioxide out of his ears. Moonwalking. Named Charles. In any situation it would be surreal enough but when it is gyrating to dubstep on ‘The 2nd Law: Unsustainable’ you begin to overload with sensory excess. ‘Plug in Baby’ regains some sense of normality with a seismic wave of moshpit chaos before ‘Survival’ takes the Queen-bombast to the height of total and utter incredulity. But somehow, this is what you want. You’re stood in a football stadium with flames, smoke, light bulbs and moonwalking robots. Do I want sensibility? Heck no: bring on the flying monkeys! That said, their third return to the stage is (by tonight’s standards anyway) relatively uneventful, with a stirring closing of ‘Uprising’ and ‘Starlight’ before we’re finally woken from our dream and headed home to wait for the Metrolink, with cries of “DID YOU SEE THE…?” flying around like the tickertape that still flutters amongst the now-empty blue plastic seating of the stadium.

Muse have forever been a band intrinsically linked with theatre and showmanship, yet tonight seemed to reach a whole new level. Yet in many senses, it shouldn’t surprise - this is their natural habitat now. What they do musically is so unique that to match such ideals with hyperbolic showmanship is the only logical way to deliver them into people’s consciousness. As they reach some level of vintage status and Matt Bellamy starts cropping up in celebrity gossip magazines, it’s comforting that they still haven’t settled into the narrow furrow of repeating themselves over and over again like so many of their contemporaries. They may continue to divide opinion on record but in terms of a full-scale, out-and-out rock show, there is simply no-one like them on this planet. It’s stupid and wonderful…foolhardy and admirable…nonsensical and profound…ridiculous and life-affirming. Out of the box and out of their heads, Muse remain best left to their own devices amidst their own little world. But in the amphitheatre - surrounded on all sides by chaos, madness and magic - peeking down through that rabbit hole, their world is still quite an extraordinary place to visit for a couple of hours.

Planet Gear: The Veils on weathered i...

Drowned in Oxford: Past, Present &amp...