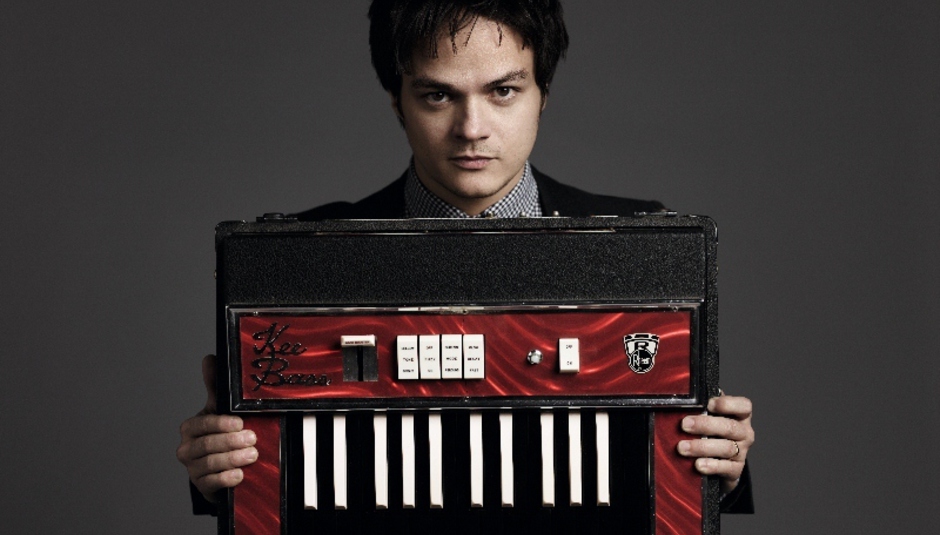 'Planet Gear' is an irregular feature in which we ask musicians to get a bit geeky and talk us through the equipment that makes the 'magic' happen... Here, Jamie Cullum talk us through some of treasures he's collected over the years, as well as the making of his new album 'Momentum', which was produced by Jim Abbiss (Artic Monkeys, Adele) and Dan The Automator (Kasabian, DJ Shadow) and features collaborations with Roots Mauva and Laura Mvula...

I have been collecting gear since I started earning a living as a musician from 17 years old. I had fantasized about a Fender Rhodes electric piano since I heard Herbie Hancock’s Headhunters. I scoured Trade-it, Loot and the classifieds of the local Bristol papers. I finally found one after a year of looking longingly at those tiny ads. It was a studio 73 Mark 1 model with the speaker underneath. More bell-like in tone than the attack of Herbie’s Rhodes on the second half of the track Chameleon, but still an amazing instrument. It now lives in my brother’s studio and I have since purchased 2 other Rhodes. All the eras sound very different. The one I currently have in my studio is a Stage 73 Mark 2. It is not as nuanced as the earlier Rhodes but it does have that attack-y sound I was after. I also have a stage 54, the tiny, almost carry-able Rhodes which is mostly laughed at by the real Rhodes community. I love it. It really digs in and it has accompanied me on 3 world tours. I have been looking for the perfect one of these for some time. It’s still the most versatile synth I’ve ever used. I’ve been mucking around on the plug-in by Arturia for years so when I got a chance with the real thing it felt like graduating to a real woman after years of looking at magazines. I’ve spent a lot of time playing with acoustic bass players and this original Minimoog can get that deep, round punch with whilst going easy on the attack like an acoustic bass. The dirtiness and dissonance it can achieve is endless, it is always such a journey playing with it. You think you have reached a plateau with it and then it just makes some new growl that you had no idea it could make. I used it for basslines on the new album, layered up underneath some other sounds to add body and sweet, natural low end. It is a jewel of an instrument. Beautifully made and never bettered. My brother and I came upon this mint condition Wurlitzer in a junk shop in Torquay 12 years ago. I tried to hide my excitement. I had started to dream about the Wurli as I already had the Fender Rhodes and was developing an addition to vintage electric pianos. Beck had one. They seemed to come up a lot less in the trading papers. Here though was a beautiful shiny student model (I believe these beige ones were designed for students) complete with the music stand, sounding and working perfectly. The shop owner didn’t really know what he had. I offered him 250 pounds and he seemed surprised and happy with that. Bargain of the century. I’ve switched over to the wurli these days onstage from the Rhodes, it’s grittier, pokier sound suits me better these days. This is such a versatile synth and a recent ebay purchase. I had used it on many times before but the producer Jim Abbiss who worked with me on this album really showed me what it could do and what a swiss army knife it could be in the studio. I had no real need for big 80s leads but plenty of need for texture and layering of sounds. This is what the Juno does so well for me. It can make gorgeous ‘invisible’ sounds that really help a track speak. The pads, put through a reverb plate are so rich and warm. I had been looking for a Logan string synth or an ARP string odyssey as I did not have that particular sound in my studio and the plugins didn’t come close. It’s that particular brand of synth string that operates in it’s own frequency. I was having no luck with either of them and read online about an Italian synth maker called Godwin that certainly was not the same as the latter but had something to offer. I found one on ebay, very cheap maybe 200 pounds. No one really wanted them. I went to have a look at it and loved the sound straight away. It was very unsynth-y with an amazing chorus. It’s really good for adding more of those invisible textures behind acoustic instruments that can help link sounds together. I have used it a ton on the new album. Worth every penny and then some. I fell in love with transistor organs. I also have a Farfisa. They are cheap and unreliable but the sound, if you get it right is so fizzy and satisfying. It was the Black Keys and Medeski, Martin and Wood that turned me on to the sound, through a good amp - a 1960s Ampeg Reverbrocket or a 70s Fender Vibrolux, some good valve distortion. It’s screaming and nasty. I had always been a Hammond B3 man. An instrument I still love and own. But there is something about the cheapness, the whore-y sound of a clicking transistor organ through the right equipment. The first solo I play on the new album is played on this, through a Fender amp and a bizarre Russian distortion pedal. A bitch to tune, but great for textures especially put through some delay. I bought this in Los Angeles having had my eye on one for a while. I’m not sure how I ever managed without it. I think I use it in some small way on every track I do, whether it’s the big, long, psychedelic delays of Love for $ale or the simple slap-back voice delays of The Same Things. It’s always there ready to add true, tape delay to whatever you need it to. This is an amazing melodica. Far larger than any other I’d seen before but with a pickup in it. It sounds great through guitar amps and a bunch of pedals is surprisingly versatile this way. Naturally is sounds amazing with a bass but also I use this amp for many other things too. I’ve put guitars through it and the wurlitzer as well. It has a warm and rounded output, not aggressive in any way but certainly not clean. The beginning of a drum kit I’m starting to purchase piece by piece. Momentum is out 20th May.