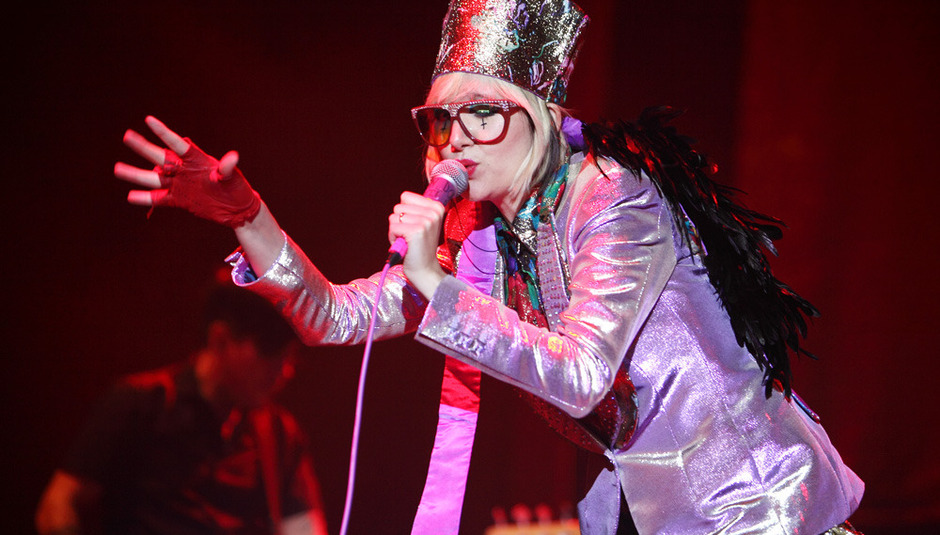 I'll Be Your Mirror Yeah Yeah Yeahs: the DiS review

I'll Be Your Mirror Yeah Yeah Yeahs: the DiS review

In ATP’s herd of white elephants, the I’ll Be Your Mirror events aren’t the most outlandish creatures – on paper the idea of a London-based, sans accommodation equivalent to the soon to be phased out weekenders makes sense. And certainly when IBYM launched in 2011 with a two day event presided over by Portishead and featuring fellow big hitters Grinderman, PJ Harvey, Swans and Godspeed! You Black Emperor it seemed like maybe the troubled organisation was on to a winner – it maybe didn’t have the cohesiveness of a ‘proper’ festival, but that hardly mattered at a well-attended event that gathered all those names under a single roof.

Two years on and things have gone a bit... er... ATP. The notion that IBYM constitutes a festival - rather than a series of gigs – was sorely tested when the entire second day was moved to sometime in November. And while this first, Yeah Yeah Yeahs-curated day was good fun (I’ll get onto the fun soon, I promise), it suffered from the problem you’d have predicted it to suffer as soon as you look at the line-up, namely that with everyone’s favourite Brooklynite trio by far the biggest band on the bill, then many ticket holders didn’t bother turning up until long after the 1pm start time.

It would be sorely pushing it to say it didn’t ultimately feel like a YYY gig with an abnormally large number of supports... which is a shame, as a day of programming at Camber Sands, with the more party-orientated bands put on later at night, this would have been totally spot on. In the vast Ally Pally, it felt like the cinema, the book club and even operating two full stages from 1pm was a bit of an indulgence when what the event really needed was a big second sell band.

Anyhoo: along with a couple of hundred other people, I did indeed go along for the first act, Invada’s Anika. The sunny Panorama Room isn’ther brooding music’s natural environment, but the soundsystem was a boon, allowing the dubby bottom end of her music to flourish… her music is all about the thick, woozy texture and it sounded pretty great here, covers of ‘Love Buzz’ and ‘Masters of War’ curdling the air gorgeously.

After a very swift diversion to see rubbish indie-Zeppelin types K-Holes, it was back to the Panorama room where ‘New Orleans bounce’ act Big Freedia was up. I’m not really sure how to describe Big Frieda in any detail without sounding like some sort of out of touch social anthropologist, so I’ll just say this: there were dancers; there was audience participation; there was a LOT of ass shaking; objectively speaking I thought the music was dreadful, but in actual fact the whole thing was deliriously fun.

Arguably Freedia should have been on later, but actually it was mental enough to properly blow away the cobwebs - The Field on the other hand, really, really should have been on later. Playing to a cavernous and largely empty main room, saddled with a dodgy live drum sound, their kinetic electronic haze felt ill-served by this mid-afternoon slot, though it clicked into gear somewhat when the drummer toddled off – it is remarkably beautiful music. An excursion to the pub for food followed, and then ‘twas The Locust. Their battering, hyperactive snarl and fun masks seemed like a bit of a turning point for the main stage, as somebody finally took aggressive hold of the yawning space; over in the Panorama Room, reggae hero Jah Shaka may or may not have actually been in the room – I never saw any physical evidence of his presence – but the basslines being nominally accredited to him were suitably monstrous. A very odd warm up for Mick Harvey, whose mildly quirky performance of a selection of Serge Gainsbourg songs was pleasant, but should maybe have been more of an afternoon thing.

Unsurprisingly, the only band to draw a large crowd on the main stage was the Yeah Yeah Yeahs (one imagines they could have sold this venue out at a cheaper ticket price). They only play for an hour and a quarter, but what an hour and a quarter – they make appropriate genuflections towards new album Mosquito - including a hilariously dubbed out ‘Under the Earth’ – but this is an unabashedly career spanning set, with two track off the self-titled EP (‘Bang’ and ‘Miles Away’), three off Fever to Tell (‘Y Control’, ‘Maps’ and ‘Date with the Night’), plus some pretty revelatory performances of less loved songs – ‘Soft Shock’ was pulsatingly beautiful and ‘Cheated Hearts’ a stadium-sized revelation. On paper 15 songs seems a little light – especially when it seems the likes of ‘Turn Into’, ‘Pin’ and ‘Art Star’ are getting played at other gigs. But if that’s what’s needed to keep perma-grinning, sequin-suited Karen O bounding around all night then that’s fine by me. It’s amazing how well old and new material gels so cohesively into one big sugar rush, with the second half rush of ‘big’ songs dizzyingly enjoyable – ‘Zero’ into ‘Gold Lion’ is positively pornographic.

A great show to round of a day of largely good ones, and in a day and age where people will pay crazy money to see Fleetwood Mac or ‘The Book of Mormon’, I’d hesitate to say IBYM wasn’t ‘worth’ £60 (if you stuck around for the day, at any rate). But yeah – as I said, it never felt like a ‘real’ festival, and with this conceivably standing as ATP’s flagship event from next year on, there’s a lot of work to be done before it truly convinces.