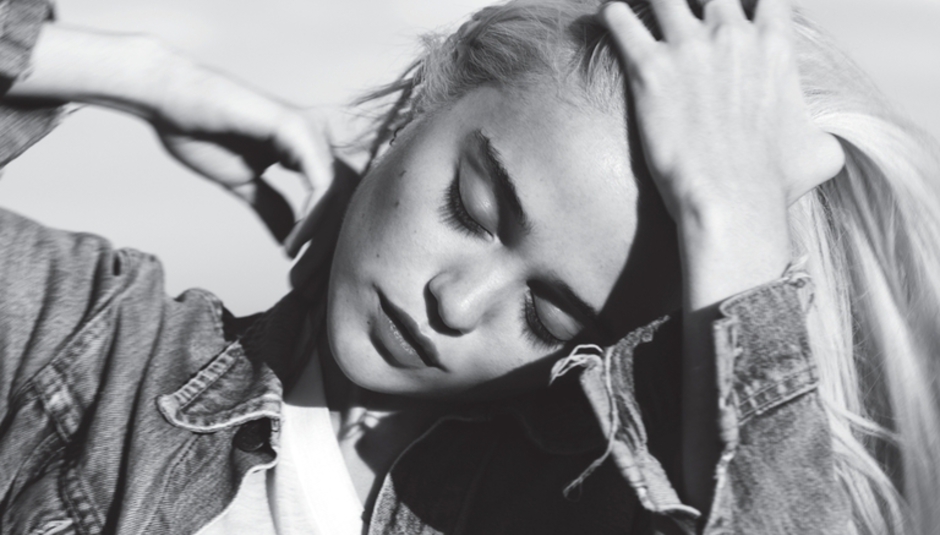 It's easy to make Sky Ferreira out as a sob story. Signed at 15, stuck in major label purgatory until she was almost forgotten about and now set to release her album five years later; she could have been the next Britney Spears if things had gone differently.

Thankfully they didn't. Sky struck out on her own and came back with 'Everything Is Embarrassing', a captivating slice of melancholic synth-pop that was co-produced by Dev Hynes, a.k.a. him out of Test Icicles, Lightspeed Champion and Blood Orange.

There's more where that came from too. The forthcoming 'You're Not The One' has the all the makings of a summer smash, while her recent Ghost EP flits from acoustic warbling to glammed up grunge with considerable panache.

In person, Sky's surprisingly endearing to talk to. She'll go off on ridiculous tangents discussing what would have happened if Paul Thomas Anderson hired The Happy Days cast to star in The Master or the time she got too close for comfort with a snake on a photoshoot. Only her tendency to pepper conversation with drawling American teen-speak ('duh', 'like', 'cool') serves to remind you she can't legally drink yet in her hometown of Los Angeles, USA.

Most entertainingly, she descended into an unstoppable stream of consciousness pretty much as soon as our conversation began...

You've spent many of your teenage years and your adult life trying to put out an album. Why did you persist with that ambition?

I don't know how to do anything else. I guess something keeps me going somehow. I never really had a moment where I was like, 'I'm done.' I just kept doing it and doing it and doing it. I swear to God the moment that album comes out, I'm going to have a nervous breakdown. An identity crisis. I really have spent the majority of my adult-slash-teenage life trying to make an album and release it.

I think time well spent for sure, and it's just the first one. So you never know...

Can you explain how you got from songs like 'One' to 'Everything Is Embarrassing'?

I loved 'One'. 'One' I actually liked back then but it still didn't feel right to me personally and 'Everything Is Embarrassing' just fell into my lap. I didn't expect anything to come of it because, at this point, nothing had ever come of any of my songs. It got a lot more attention than I expected. My publicist sent it to Pitchfork, secretly, without me knowing. I don't think they knew at first who it was and they liked it. Then they put the demo out and, yeah, it was cool.

How did you meet Dev Hynes? [Co-producer of 'Everything is Embarrassing']

I think it was just like through mutual friends. I just kept running into him everywhere. I remember when he was in Test Icicles, when I met him he was just starting to do Lightspeed Champion.

Did you ever see Test Icicles?

No, cos I was in L.A. and like 13 or something. But I remember I had the album; I still have it on my computer. I was obsessed with them.

So... I just kept running into him all the time. I still run into him in the most random situations. I'll be at the doctors office and he'll walk by. It'll be like, 'Oh, there's Dev!'

So having been sent the demo for 'Everything Is Embarrassing', how did you go about putting your own stamp on it?

So he [Dev] sent me the idea, like the first verse, but it was five minutes long and on loop. And we [Sky and co-producer Ariel Rechtshaid] just changed a few chords and then added some lyrics and then it was kind of done. Then we cut some of it and rearranged the pre-chorus...

So basically, you made it good?

No, I didn't make it good. It was already good, I just gave more of a structure to it.

Was that the start of a new tone of songwriting for you?

I'd recorded most of my album at this point. Originally, it was meant to be another song that came out first... I didn't want to completely change the direction of what I was doing because of that song. It's so Blood Orange too. It's so Dev - that's what makes it special.

The song's about insecurities, which I guess isn't something people would immediately associate with you given your past in modelling and glossy pop. Do think that's part of it's appeal?

I guess I'm a bit vulnerable in it for sure. It kind of has a different meaning for me all the time. At one point, it was about a relationship. At another point, it was totally about myself. I go back and forth, it's universal.

And you shot the video on LA bus routes, right?

Yeah, we didn't know what we were doing. The song came out and the label were like, 'we need a music video by next week.' But they didn't want to give me any money to make it, so I made the video for literally five dollars. I bought Grant [Singer, the video's director] orange juice and we got two bus passes. At first we were going to do this really weird thing in the playground. So that's why the playground is in it. We had different guy friends we were going to use getting dumped in a playground, so that's why it's in black and white and we're spinning around and stuff. For some reason, I felt like the video should be like 'Nothing Compares 2 U'... So, in the end, we went with whatever happened on the day.

'Everything Is Embarrassing' feels like an intensely personal song but how much of it is written from your own experiences?

My writing process is completely scattered, like in life I can't pay attention... my brain is completely scattered. When I'm on the street, I'll just sing into my iPhone now. I never really go into the studio thinking, 'I'm going to write a song today.' Sometimes, I'll end up staring at the wall for eight hours in a studio because I can't force myself. It either comes to me or it doesn't. The lyrics I write are a bit... to be fair, I am a bit jaded. So they're jaded and mean and sometimes, it doesn't translate that way. People can't tell that I'm being sarcastic.


You've worked with a lot of big producers like Greg Kurstin (P!nk, Kelly Clarkson, Lily Allen) and Bloodshy and Avant (Britney Spears, Kylie Minogue, Madonna) in the past. Why do think things didn't click for you then and they have now?

I was still learning what I wanted to do at the time. People were just trying to get a hit out of me. They weren’t really interested in me... not really the producers, more like the label people. So anyone who had a song or there was hype around, they would send me to the studio with them and I’d go in with this stranger for a day and the next day I’d be with someone else for the day. There was no personal attachment.

What happened after your big pop push?

Well, I got shelved, so I couldn’t really do anything because I was under a contract. When you’re on a major label people want to get paid for their studio time. They want to get paid a lot. You know? Like the moment they see EMI or Universal attached to it they’re like, ‘pay me $10,000 to sit in a room together for two hours'.

My budget completely changed over time but I’m totally fine with that. I’d rather have the freedom to do what I want than have tonnes of money. You can’t enjoy those giant budgets if you can’t make anything you want to make.

But they [Capitol] didn’t want to let me go because they would look bad if I went somewhere else and had a hit. It’s like an ego thing. Also, EMI got bought by Universal so I didn’t have a manager at the time and I was just working with my friends. I collaborated with people and over time it started making sense.


‘You’re Not The One’ is pencilled in to be your next single. It’s a bit of a rocker...

Yeah. So the production is super-inspired by Low by David Bowie. I wanted to make a super-poppy version. Like not where you’re rolling up your car windows because you don’t want anyone to know you’re listening to it. Like trying to hide it in your iTunes.

Ariel had the idea. People say it sounds like Siouxsie Sioux. I guess the song was originally about a relationship when you’re not chasing after them. You know they’re kind of fucked up. It’s like a game of cat and mouse. They’re interested but not interested enough and it’s not fair. That’s basically what it should be called, ‘It’s Not Fair’.

In the video for ‘Red Lips’ you’ve got a tarantula crawling all over you. That’s terrifying. How were you not scared by that?

It was fine because I totally blanked out. I was out of my own body. I don’t know what the fuck happened. Terry [Richardson] did the video for nothing, like no money. He called me and said, ‘Okay. Wanna come into the studio? I have a tarantula and we’ll just figure it out...’

So I get there and the tarantula’s actually not that intimidating in person. It’s pretty small. When it’s on you they’re so fragile but it still has its fangs. It’s like paper, they could snap at moment and they’re super-light. It feels like velcro crawling on you.

The thing is I hate insects, so I was surprised when I did it. I remember when I moved to New York, the first apartment I moved into had cockroaches and I moved out a week later.

Okay, last question. You’ve got a reputation for being a bit serious so could you tell Drowned In Sound’s readers a joke?

I have a joke about two other people, so maybe I shouldn’t say it.

What do you call Wiz Khalifa and Rick Ross standing next to each other? A 10.

’Everything Is Embarrassing’ is available now from iTunes