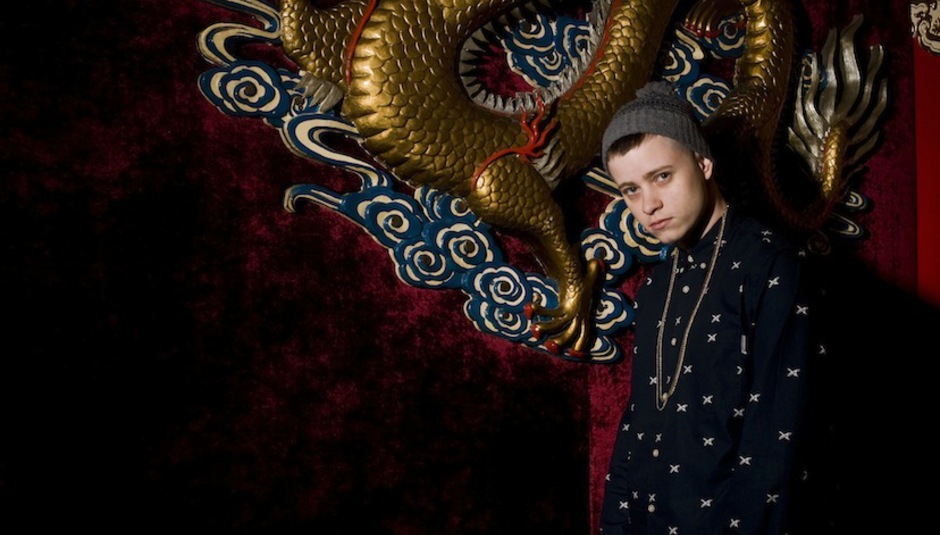 Hiya. One lunatic has departed from the Drowned In Sound singles asylum only to be replaced by another. Fear not, the good ship remains steady and you’ll find eight singles below all vying for your tender affection. Seven of them are spectacular in their own special ways, one of them features Sean Paul. You do the maths.

Rustie must be a man consumed by fear. I bet his Glaswegian bedsit is a shrine to insomnia, littered with half-empty mugs of Horlicks and the faint smell of terror. How, when the peons of Skrillex and Baauer have been met with hearty guffaws, has his own brand of glitter vomit electronica been feted as the best thing since serious face James Blake?

I mean just look at his press shot. That is the harrowing stare of a man who has watched every late night horror movie marathon on Film4 and can no longer tell the difference between one of George Romero's zombies and a ketamine-addled fiend. For a man who makes his living playing dance music to trendy sorts, this is a thoroughly traumatic prospect. The truth is that Russell Whyte will get found out at some point or another. Especially if we insist on calling him Russell from now onwards.

In the meantime, 'Shlasherr' captures the sweet spot you hit halfway through consuming a sherbet dip. The bits in between the LOUD SYNTH NOISES are like the cheap lollipop, which you could do without if it didn't make such an effective vessel for transporting sour into your bloodstream. The LOUD SYNTH NOISES are incredible and will continue to be so until you consume too much of them and your tongue goes rank.

So what's the moral of this story? Gobble up as much Rustie as you can until the sugar crash kicks like a mule.

Nathan Williams is stig of the grunge dump

Wavves - Demon To Lean On (Mom+Pop)

I'd love to be a fly on the wall of a Wavves studio session...

'Like, what should I write about today man?' wonders Nathan, after slowly exhaling from a bong embossed with a cartoon of his favourite lolcat.

'You should totally try and capture your life as a pothead loser,' replies his remarkably articulate subconscious.

'That's cool compadre but how will it sound?' ponders young, naive Nathan.

'Erm, strum around on your guitar for 20 seconds or so until it gets lame and then slam down on the distortion pedal to rock out for the chorus,' his subconscious postulates.

'No way asshole! I've done that before,' says an unsure Nathan.

'Yeah, but this time we'll do it a bit slower than usual and everyone will think we've matured in a most righteous manner,' his now impatient subconscious barks back.

'And please stop smoking so much weed dude,' adds his subconscious. 'It's making you paranoid.'

Despite missing out on a gilt-edged opportunity to name themselves Wangpire, this band deserve your forgiveness. That's because 'The Hearse' sounds like an Ariel Pink song that Ariel Pink decided to complete to the best of his abilities. By this, I mean it sports some deliberately shit/ramshackle production values and pisses around in its middle eight but is brilliant all the same.

Dan Michaelson is feeling sad. Come share in his misery

Love can be an agonising business and judging by the forlorn sounds of 'Sheets', Dan Michaelson appears to reside in the Bon Iver sphere of hopeless romantics. Ignore the 'miserable man with an acoustic guitar' connotations, this is gut-wrenching stuff that doesn't signpost its anguish with sweeping key changes or earnest lyrical soundbites. Instead, Michaelson carves open his emotional scars with the quiet abandon of a man who's stuck in a moment that's long since passed. If you see this folky harbinger of woe about, offer him a much needed hug.

Huzzah! It's a sort of single from the sort of Sugababes

Given the biggest hit MKS originally had as the Sugababes was 'Overload', a Number 6 smash way back in 2000, you had to wonder whether anyone would really care about their reunion. After last week's reaction this uber-hip Kendrick Lamar 'cover', you still have to wonder whether anyone is really going to care about their reunion.

'Lay Down In Swimming Pools' isn't an official single but it did get played on the Radio 1 Breakfast Show. It's got around 140,000 plays on Soundcloud but Pitbull's Men In Black III theme song has well over 1 million. Perhaps most significantly, it's produced by Dev Hynes (Solange, Sky Ferreira) who despite having achieved demi-god status in East London, doesn't tend to write songs that people buy.

Oh well... the harmonies are amazing.

Ciara sings a song about bonking

Ciara, who was last seen trying to look sexy while stood next to a JCB truck, is back with a sultry slow jam about the good old fashioned bump and grind. According to Wikipedia, "['Body Party'] lasts for a duration of three minutes and fifty seven seconds." Obviously this isn't a comment on the love-making stamina of Ciara's boyfriend Future, who co-wrote the track. It's just obviously not, so stop thinking otherwise.

Krystal Klear is a crafty bugger. Like one of those religious cult fellows he draws you into his grasp, not with a pamphlet and promises of eternal salvation, but with lashings of cowbell and a thudding bassline that's lifted from 'Holiday'-era Madonna. Once you're smitten, he then gets Jenna G to swoon at you with lyrics about life as a skag-addled prossie. Of course, the 'love is like a drug' simile is old hat but that's where the cowbell comes in; for it is the answer to all musical conundrums.

The Saturdays - What About Us ft. Sean Paul (Polydor)

You know when you try to salvage an incomprehensibly bad photo by slathering it with shoddy lighting effects on Instagram? That.