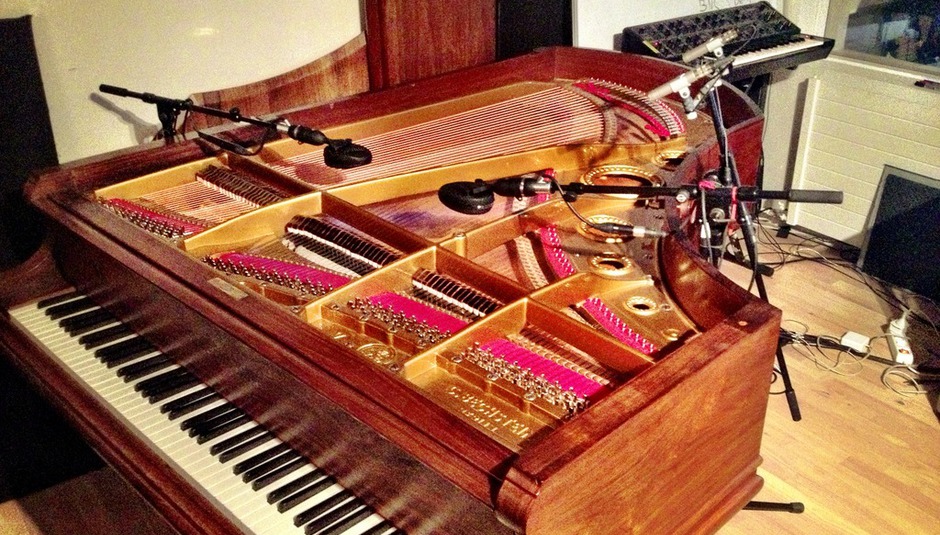 Welcome to my humble abode! This is where I have made all of my music for the last two years or so. It is a relatively small room situated inside a fairly large old fish factory turned studio complex. It's an inspiring place with a great view of the ocean and the atmosphere in the building is great. There is a mixing room, mastering room, recording room and even a mastering suite, as well as a few of these little producer's rooms like mine.

In the last two years or so I have gone from having a pretty basic home studio setup (mbox, laptop, and a bunch of crappy stolen plugins) to something that I am getting really happy with. I recorded and mix most of For Now I am Winter in here. If I wasn't a total gear addict I would probably say I don't really need any more stuff. But who are we kidding?! This is my work station. When composing I record instantly, a big part of my idea of composing is that sound is also music and therefore an unmissable part of the writing process. I run a "Hackingtosh" with Pro Tools HD 10 and use UAD plugins for most of the 'in the box' processing. I also use a bunch of sample libraries for arranging strings (but I always record them live later on). I use Mytek 192 A/D converters and listen through Barefoot MicroMain39 monitors. This is my beloved piano. It is a newly restored Bechstein from 1903. I compose everything on this lovely piano. It has a really soft and warm sound to it. It also has its imperfections but I prefer a piano with character. I usually record it with a pair of Coles 4038 close to the hammers for intimacy and warmth and a pair of Neumann KM84 a bit further away for more dynamics.

Those KM84's actually have quite a story about them.. They used to belong to Peter Meisel, the founder of the famous Hansa Studios in Berlin. So there is a good possibility that they have been used on some of the greatest 70's and 80's records made there! Peter passed away last year and I bought these from his estate. They even have his name written on them with a marker pen. This is my preamp rack. From top to bottom:

These wonderful Neve 1073 clones were actually built by my assistant. He is starting up his own audio company and I gotta say those are amongst the best 1073 clones I have seen! Both preamp and EQ sound pristine and as far as i can tell, pretty much exactly like the original. And they also look rather sexy. He wants to start taking orders for next year so you should get in touch if you want some of these!

This was a 4 month process to get and it nearly made me bankrupt (DHL even lost them at one point), but oh were they worth the wait... These are probably the nicest, warmest preamps I have ever tried. Absolutely perfect on piano. Nils Frahm recorded Felt (possibly the best sounding piano album ever) with this exact pair.

Basic, clean and with lots of gain. Sometimes you just need something that you can count on. I usually use these for strings or other stuff where you don't want too much colour. Now onto one my favourite pieces of gear. I recently got this Nagra IV-S tape recorder and it's the most amazing little thing! The preamps are great and it actually runs on batteries so i can take it with my anywhere to make field recordings. I also record many of my ideas on this - that tape is just a big idea bank by now - there is just something about the spontaneity of being free from the computer while working on new ideas. Here are some of my keyboards and synths. The Roland Juno 106 is one of the most used pieces in my studio. The intro to the title track on For Now I am Winter is all Junos through Space Echo, for example. On top of it is a rare Jen String Machine which makes up all the suspenseful scary sounds you can hear in my recent score for Broadchurch (on ITV). The Micro korg I don't like so i keep it upside down on top of that nice Harmonium. This is my effects rack in the making. The Space Echo has, no kidding, made it somehow onto every single recording I have made since I got it. I barely ever track synths without going through this first, it's also great on vocals, drums and basically everything.

Below it is the latest addition to my studio, a 1940's Department of Commerce tube limiter. It has RCA tubes in it and Thordarson transistors. The main reason I bought this was actually because I recently heard abut this Icelandic fella Hjörtur Thordarson who emigrated to the US in the late 1800's and later became one of the most significant inventors for the recording industry. His inventions are still industry standard even today. Not many Icelanders know about this wonderful historic anecdote and as far as i know there were no other pieces Thordarson equipment in the country… So I basically took one for the team. Call it civil service (Or a good excuse for break-up shopping on Ebay).

For Now I am Winter is out now on Mercury Classics.