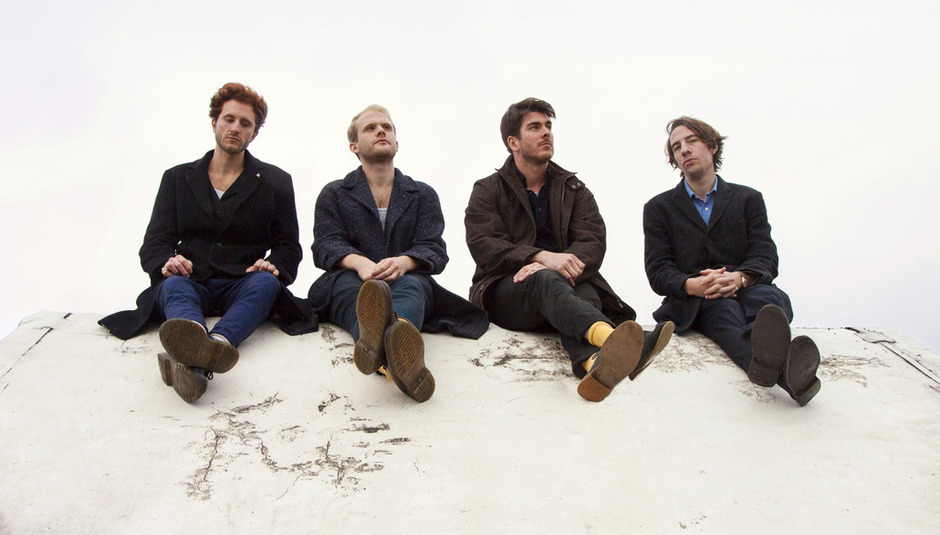 This week, London based quintet Fiction release their debut album The Big Other, produced by Ash Workman and James Ford. We got the band to talk us through the ten tracks of 80s inflected, spidery guitar lines and poly-rhythm madness...

This song is a kind of mock epic that both feels sorry for itself and is angry for doing so. It is one long sonic ramp and always felt like an introduction to something. There were concerns that it might be a bit stadium rock, though the song would love to know it was thought of that way. No rats, houses or comets were harmed in its making.

We had the chorus for this floating around for a while but no verse seemed to fit. One day Dave came into the rehearsal room and played a bass line that in one movement seemed to continue on from his walk, and the rest of the song was born very quickly and easily. In true bricolage spirit, it utilises a shaker sample that was nicked from a Hanson song.

This song grew out of another called ‘Instant Memories’ and left nothing of the original intact, which is probably quite pertinent. It sings of the misappropriation of artefacts from culture to culture, which is why in the video you can observe a seahorse inside a light bulb, or an aspidistra being grown in a saucepan etc.

A while back, James was coming out of the shower and heard Mike playing a keyboard riff. The former suggested to the latter that ‘a song should probably written with it’, and with that Mike locked himself away and made the first demo. It is perhaps the only song to be used in a car advert that is about car crashes and things going wrong.

In the words of Lloyd Cole, ‘it’s just a simple metaphor’. James wrote this song to console the band’s manager, Johnny, who would like to remain anonymous. He had just added another break-up to the collection and needed a musical shoulder to cry on. The original version took about as long to write as it did to play and was then improved by the band’s full arrangement.

This song is the only one with any time-signature trickery on the album, and sticks to a kind of Pixies-style quiet-verse-loud-chorus structure. It ended up with an outro that knows full well it’s an outro and isn’t ashamed to shout about it. The delay on the guitars at the end causes them to harmonise with themselves. It was all recorded live, in one take, or maybe four.

Mike has made a couple of solo full-lengths, and the band decided to steal this song from one of them. It took a fair amount of work to arrange as the accents fall in quite strange places thanks to his awkward quantising, but it seems to get the crowds going on the occasions that we’ve played it so far.

This could probably be considered the ‘slow one’ of the album, and the only track to feature no live drums. It’s a sad song about wanting. About wanting and getting and not wanting anymore. About the grass being greener and the past being a great big ocean of chlorophyll.

We could have called this song ‘Hypnagogic Jerk’ or ‘Sleeping Myoclonic Twitch’, but they didn’t have the same ring. In the second verse James claims that Sigmund Freud is both unemployed and a naughty boy, to which Nick responds with a guitar part that is so very incredibly naughty that when we first heard it we made him face the wall for a week and think about what he'd done. Someone wrote that we could single-handedly soundtrack all the Bratpack films; it’s only at the end of this song that we can kind of see what they meant.

Apart from re-recorded drums and bass, this is the original demo that was made many moons ago. It contains a finger-click that is probably in the top 1000 best finger-clicks ever recorded. Although Mike’s lyric is rather abstract, the rest of us find it strangely moving.

This song came together from a call and response between Mike’s keyboard and Nick’s guitar over a particularly frugal drumbeat. It was always earmarked to be the closer to the album; we’ve been finishing our live set with it for a long time. It’s dedicated to Alan Turing who reportedly ate an apple laced with cyanide to commit suicide after being forced by the British government to take female hormones to ‘cure’ his homosexuality.

The Big Other is out this week on Moshi Moshi.

"If a handful of people is a scene th...