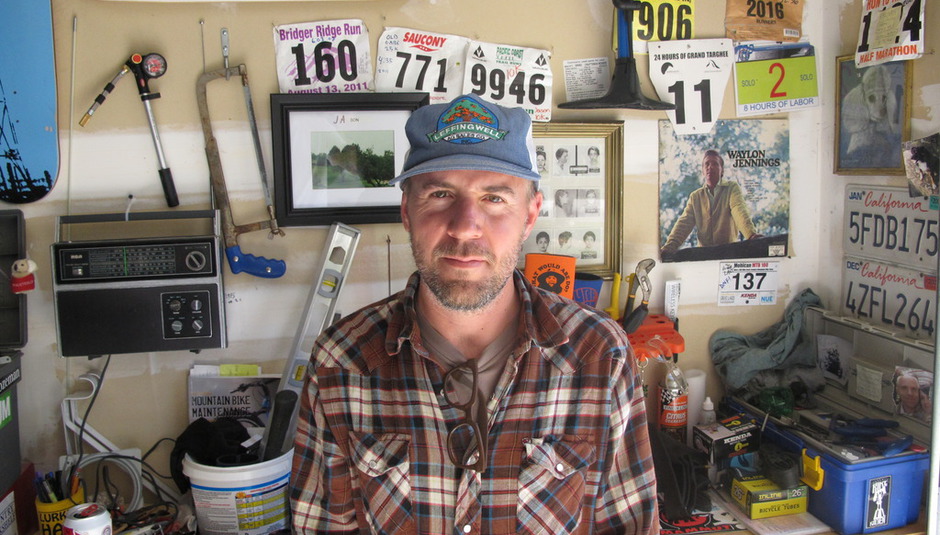 Once upon a time, in days when 'Americana' was still bandied around as if it wasn't a slightly cumbersome genre catch-all, the bittersweet beardy stylings of Grandaddy slayed many a delicate indie-rock heart.

Their leader, Jason Lytle, is about to return to the UK for a brace of live solo shows in support of his second album, Dept Of Disappearance. DiS bent his ear and found out there might be some good news for fans of his most celebrated musical vehicle...

Your solo work has increasingly made use of computers, which goes against the technophobic grain of Grandaddy album The Sophtware Slump. Do you trust technology more now?

I don't feel like I ever distrusted it. The Sophtware Slump was more me sitting back and remarking on all the asinine ways that people choose to use technology. We've been given all these incredible tools and people have invented these amazing things. But once you permit yourself to go down that road of making records and having a studio, you pretty much have to embrace all forms of technology. I have a pretty good array of analogue and digital gear. It's amassed over the years. I don't favour one method of doing it over the others. It all has his place. It's just tools to get the job done.

You've suggested that drinking a lot red wine was one recording 'technique' you've employed in the past. Are you any soberer in the studio nowadays?

[Laughs] I think I definitely was experimenting with seeing how drunk I could get while recording other albums [in the past]. Sometimes a good hangover can really set your brain in a nice abstract mode. Being clear-headed is working a little bit better these days. I moved to Montana and cleaned my act up a little bit, but I still enjoy the occasional imbibement.

How much has moving to Montana, a complete change of scenery, altered your music?

The main reason I moved out here was to have direct access to the mountains. The mountains can be a really scary, intimidating terrain. A lot of people drive by them and see them in pictures, but don't actually get off the road and spend chunks of time in them. I have pretty direct access to a lot of outdoors, back-country and mountains. I spend a lot of time just clearing my head and not even consciously working on stuff. Things just slow down, there's a resetting of time. My clock gets turned off. I leave all the modern bullshit by the wayside and it does allow me to have a freer mode of thinking that tends to get confused and tied up when I'm surrounded by shopping plazas. I definitely have benefited from whatever happens to my brain when I'm in the outdoors for extended amounts of time.

Do the same topics and concerns still influence your work as when you were writing for Grandaddy?

I do admit, it used to always turn me off when I would hear other bands moaning and groaning about being in a band. And I felt like I started to go down that road. I'm really glad that I don't have that to write about anymore, because nobody wants to hear that. I don't miss playing in a band anymore.

So how did it feel to revisit those days during the brief Grandaddy reunion last year?

Knowing that it was going to start and end at some very definite point helped. There was an emphasis on 'Let's have as much fun as we can and just call it a little paid vacation'. And a lot of it was. But I did it for just long enough to remember why I don't do it anymore: the lack of freedom and constantly being around people 24 hours a day. By the time it was all done, I was just like 'Okay, I'm pretty much over this'. I'm glad that we got to do it, but I'm super happy that it's done.

It doesn't sound like you have much appetite for another Grandaddy reunion or writing any new material in the foreseeable future, then?

I love the idea of making another Grandaddy record, but I wouldn't want it hanging over my head like 'Okay, you made this record, now are you guys going to get out there and tour in support of it?' Let's just say you had a choice – I'm creating a mock situation here – that your favourite band will promise to make a record every couple of years but you'll never get to see them [play live]. It's going to be high-quality stuff and resemble what you really liked about the band, but don't get mad at them if they don't come to your country, town or whatever to play shows. Rather than, okay the band will get back together and play shows and they'll be fucking pissed off and miserable and it'll all come to an end again. Wouldn't you just rather have the safe version? I'm hoping for this dream scenario where I can make Grandaddy records every so often and not have all this messy stuff that goes along with it. I already did that and it's just not appealing to me anymore.

So what are the chances of another Grandaddy album?

Um, oh man [sighs]. I don't know. It really helps to get some feedback. I might just see what people are thinking about it. Maybe it won't be worth it. Who knows. But I've always been pretty good about going with my instincts with stuff like this. We'll just have to wait and see.

Both as part of Grandaddy and solo there always seems to be an inherent mournfulness tempered with a lot of hope in your music. Do you see yourself as a happy or unhappy person?

I've made some pretty good strides in the last five years in figuring out what it takes to make me happy. When I'm happier I'm more creative, more productive, but there's definitely a standoffish mournful thing that I think is always going to be there. That's probably getting into therapy about growing up and shit. And that's totally fine. I've definitely learnt how to blow off steam in productive ways and get a little bit of balance in my life, so I'm not just fucking bummed out, anxiety ridden and [laughs] a master grump. I'm a lot better off now than I was ten years ago, that's for sure.

In a few previous interviews, talking about money in the context of music hasn't proved a taboo subject for you. Do you think more bands/artists would do well to admit they're earning a living from music and not take hyper-indie attitudes towards the subject?

I never had any money. I guess it'd be cool to have the luxury to grow up rich like 'With all my good looks and money, what is it I want to be when I grow up?' and decide to be a musician in a fucking cool band. But there's a whole other realistic part. You realise that you have totally fallen in love with music and songwriting and recording. So what is it you actually have to do to pull this off? Talking about the money is sort of funny. I'm not going to give out my bank account numbers [laughs]. But it's a fine line, commerce and art, pulling it off, trying to stay true to what you do and make a living.

That said, if you had a dollar for every time you've been asked about this next topic, you'd probably be financially secure for life. Beards are often associated with yourself and Grandaddy. What's your current facial hair status?

I don't put that much thought into it [laughs]. I don't feel any need to rock the mammoth beard that I once did. Been there, done that.

You can grab a free download of 'Dept Of Disappearance'here:

The album, Dept Of Disappearance, is out now.