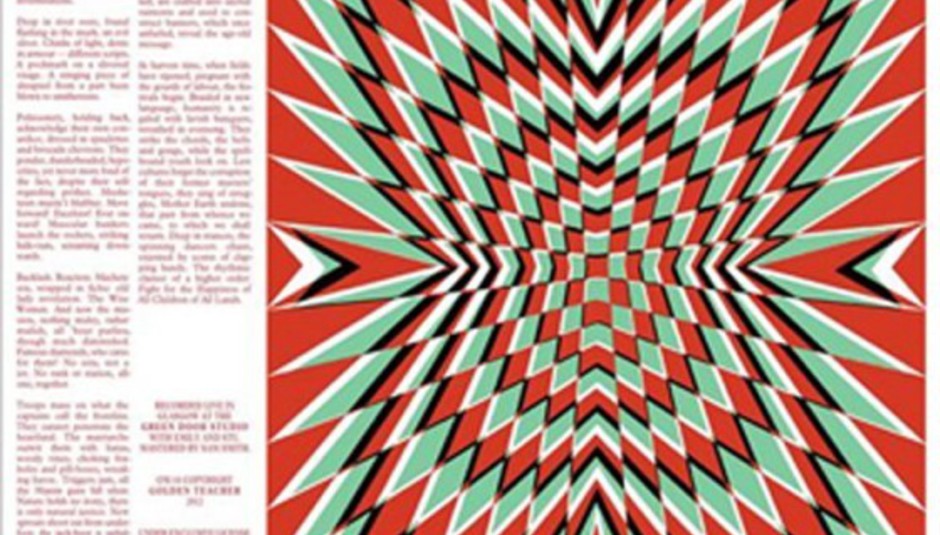 Golden Teacher aren't messing about, which is why the entire vocal performance of 'Dante And Pilgrim' is snarled in jerky French - or saccadé française if you want to be a ponce about it, which I do. Now, the only phrase I could make out in full was 'Dépêche-toi garçon!' or - for the divs - 'Hurry up, boy!' and this is worth pointing out because this phrase, this song, is very much the sort of thing that inhabits disco's masculine sass; it is bossy and rude in a way that says If You Do Not Move To This Record, Something Will Happen, And You Might Not Mean To Like It. 'Dante And Pilgrim' is partly brilliant because of the whip-crack hi-hats it begins with, and it's definitely brilliant because of the bubbling, murderous synths, and it's almost certainly brilliant because it has more pace, verve and purpose than anything else in this week's pile. But mainly it's brilliant because of the number of times our Fronch hero growls, howls and exhorts - whether in pain or pleasure, it is impossible to tell. Do you need me to point out that a 'Golden Teacher' is a kind of psychedelic mushroom? No.

Melancholy Love Song of the Week!

As anyone who has read The Enchanter will know, thwarted adolescent experiences create a whole heap of trouble in later life, which is why Kwes has been forced to funnel his cut-short, lost afternoon of 90s rollerblading into a dischordant pop song. The thing is, no amount of aimless melodies, busted bass or tumbledown piano is going to bring her back. Not least because it is Kwes's fault that their fun was curtailed in the first place, and it was ruddy him that sodded off early 'cause I had to go in for dinner'. Essentially, this single gets away with having subject matter fit for a random twee-pop generator by sheer dint of its amiably messy production and the ache in Kwes' voice. Then at about 2:49 it drifts into distort and static, as if he were trying to turn the concept you humans call 'regret' into a sound fit for radio.

Instrumental of the Week!

'Buffalo' is ambitious as a thing could be. And it means to take you with it, on a blistering journey I shall not spoil with meaningless genre words like 'electronica', or 'funk' when such things are not sufficient, they will do it ill. What I will say, is that if you want to feel as if you are on some kind of epic quest - perhaps in pursuit of purchase on the pavements, as the snow falls - 'Buffalo' is likely to being on some sort of hero complex. A majestic composition, realised with precision.

Curiosity of the Week!

Because my favourite bit of Marquee Moon is when Tom spells out the word 'friction' (eff-arr-eye-cee-TEE-EYE-OH-EN), I am amenable to so-called Jacques Caramac, despite an aversion to wacky band names. I mean, it's hard, isn't it, to take a thing too serious, when it is determined to spend its time mugging at you; it is hard to like a single that is only ever a whisker away from putting ice-cubes down your top. It's even harder if the band in question is indebted to The Fall, I mean, they are not a band you can get away with aping; they are too spiky, too much themselves, for you to try. Despite all this - despite being utterly ludicrous - 'It Takes All Sorts' is really wonderful, from the sneered vocals that call out modern life's 'reptiles' to the Roxy-o-like guitar parts.

I mention Mr. Segall because I would like draw attention to his gruesome video for 'Thank God For Sinners' above - in which a malenky bit of ultraviolence results in a hundred hands ripping out his speaker-maker.

You Don't Want To Like It (But You Are Only Human)

Tim Burgess - ‘The Doors Of Then’ (O Genesis)

Gloriously inoffensive, 'The Doors of Then' has the kind of crap, skiffley drums you imagine a Muppet might play. And it's got interludes with keyboards that sound like recorders. And it doesn't have a nice big driving beat, one of them loud ones, because it's got one that shuffles, half-arsedly berking about. 'The Doors of Then' also has a lyric that goes 'Oh no, I love you,' as if Tim didn't want to love you, but gor-blimey, he just can't help himself. The whole thing's absolutely insufferably nice and I want to hate it but I can't lie, I heard it first thing, before my inner cynic were quite awake, and just as my teasmade was just puck-puck-percolating, and I thought it was lovely.

It's Shrill, But Not In A Way That Puts You In Mind Of Passion Pit

It's shrill, but not in a way that puts you in mind of Passion Pit. So there you go.