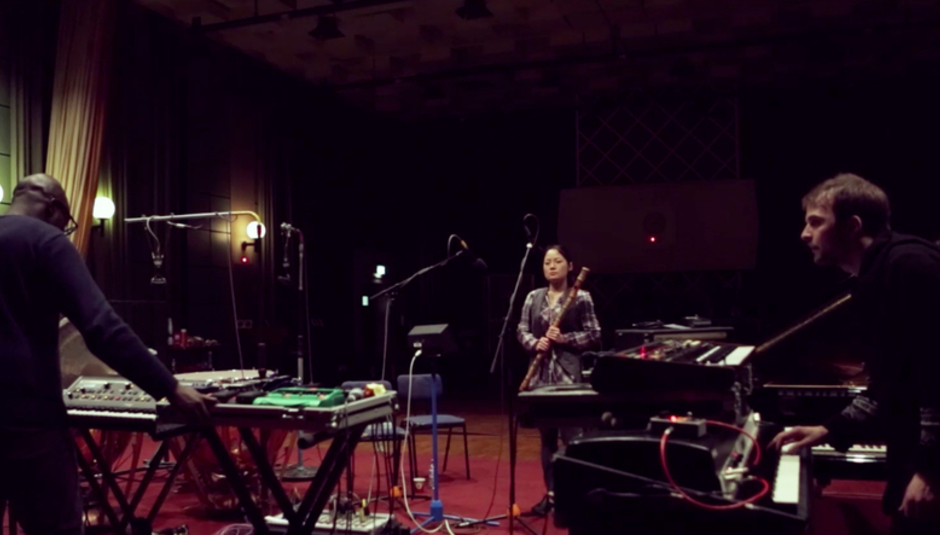 My breath mists on the narrow door window as I crane my head into its corner, trying to get a decent view. At first glance it's like a snapshot of a gorgeous old art deco cinema, lights dimmed, pastel walls, spacious, opulent yet practical. For a moment it seems abandoned, but the wonderful music greeting my ears tells me otherwise. Across the room I can make out three figures and a jumble of instruments and equipment, which is presumably the origin of this swell of sound, first muffled when I enter the corridor, then growing louder, more captivating...a beautiful, meandering fusion of lilting classical piano, dark, reverb-heavy electro atmospherics and piercing, ululating eastern flute. Someone lets some sub-bass creep into the mix. I suddenly think I know how David Attenborough must feel, watching the uber-secretive mating ritual of some exotic species.

It's not a bad analogy for BBC Radio 3's Late Junction show as it happens - the basic concept hinges on several musicians from different backgrounds coming together to combine their talents and create a wildly original musical entity. On the evidence of what I've heard so far, tonight's joining seems altogether likely to result in a designer baby - UK producer, artist and MC Ghostpoet (Obaro Ejimiwe) is collaborating with Korean flute player Hyelim Kim and German composer Nils Frahm. They've never worked together before, only meeting upon entering the BBC’s Maida Vale studios at 10am this morning – since then they've been jamming for something like five hours.

There's a lull in proceedings and I'm ushered through into the Mothership, the Mecca, the Holiest of Holies – studio MV3’s control room, where the sounds are recorded. The biggest mixing desk I've ever seen causes my internal jaw to drop a little when I enter (seriously, you could play ping pong on this thing), and there's myriad other amazing bits of kit dotted about that I know nothing whatsoever about. Greeted by the warm and enthusiastic crew of engineers and Late Junction producers (amongst others), what should be an imposing experience really isn't - instead the dominant impression is formed by the sounds (which are clear as crystal inside this cocoon of technical sorcery) and the visual joy of seeing people performing together. My peephole from earlier is replaced with a widescreen viewing experience, complete with surround sound upgrade.

The music deserves it. What we're witnessing is three people's artistic personalities interacting in a very special way, producing a remarkable slice of sonic experimentation. By necessity a long-winded, shape-shifting soundscape is the order of the day, a cauldron of musical vision bubbling away to increasingly endearing effect. Frahm moves from producing simple but compelling figures on the baby grand to attacking its insides with mallets, playing piano as percussion with the flair of a mad doctor. Kim has a menagerie of Korean bamboo flutes at her disposal - one of these is known as a taegum, and produces a raw, emotive sound that genuinely sends shivers through me. She's a miracle to watch, completely in the moment and responding with deft, powerful playing. As the piece evolves Ghostpoet throws out a throbbing, proggy beat which Frahm capitalises on to the fullest - behind their instruments the two bob up and down like stadium DJs mid-show. Nestled among the timpani (borrowed from the BBC Symphony Orchestra), decks and mics are no less than four piano variants, including a Fender Rhodes and something called a celesta, which produces precise, music box chimes. From this cradle something breathtaking is being created – it’s a privilege to witness it happen, even if it does go on for bloody ages.

I'm hanging around in the art-deco cinema seats for a while after the musicians wrap up, waiting for an interview. A plaque on the wall reveals that Bing Crosby's last recording session took place here in 1977. There's certainly an atmosphere to the space, even without people filling it with sound – the Maida Vale studios have been part of the BBC for 78 years, and have been graced by thousands of musicians of every feather and frame. After Radio 3 DJ Max Reinhardt has had a chat with Frahm, Kim and Ejimiwe it’s my turn. Reinhardt is of course a dab hand at this interviewing malarkey and has asked all the decent, insightful questions already, but I’m determined to have a go nonetheless.

Was there any particular vibe evident in the music they were making today? "Personally, what I loved about it was that it didn't have any particular style,” says Ghostpoet. “It was just flowing from different types of genres to different tempos and atmospheres as we went along. That was what made it interesting for me and why I wanted to do it in the first place - regardless of what we made I knew it would be very experimental, because we're all coming from different avenues musically." Kim agrees, stressing the spontaneity of the performance and how much she enjoyed the setting.

Did they feel nervous about playing in such an unplanned, experimental fashion? Frahm is quick to lampoon what is, admittedly, a pretty dumb question: “It was like waking up on an early summer morning and riding a bike to work - you feel a bit excited and a little bit fresh, but you know it's going to be warm later on,” he states wisely. Point taken. “[It's a feeling of] curious excitement to hear what you will come up with. It was really different to anything I'd worked on myself," he adds.

The composer suggests their respective approaches to music, stemming from different traditions, was an advantage as much as a challenge. “It's good to have some restrictions to focus on,” he explains. “There's a narrow bit which is still possible, which is left from all of the ones you can't do right now, and then you make the best out of that. You wouldn't have done that by yourself at any other moment of time.”

The quote ‘writing about music is like dancing about architecture’ has been attributed to quite a few sources, and certainly rings true when trying to capture the essence of an eclectic collaboration like this one in prose. They came together, they experimented and played together, and it worked. It’s a marvelous thing, and there’s no need to abstract it beyond that. One thing’s for certain, though: Kim, Ejimiwe and Frahm have all clearly been inspired by their collaboration, and produced something that is reflective of all their individual characters and talents. “If we did this again on another day it would be completely different," Ejimiwe sums up. “I only understood what we'd done when I listened back to it - I was just going with the groove over a period of time. Like you say it was organic, like a living thing developing and moving, morphing and changing as we go along. That's a great thing.”

This episode of Late Junction airs on Thursday 20th December. It will be available to listen back to here after that date .

ATP The National: the DiS review