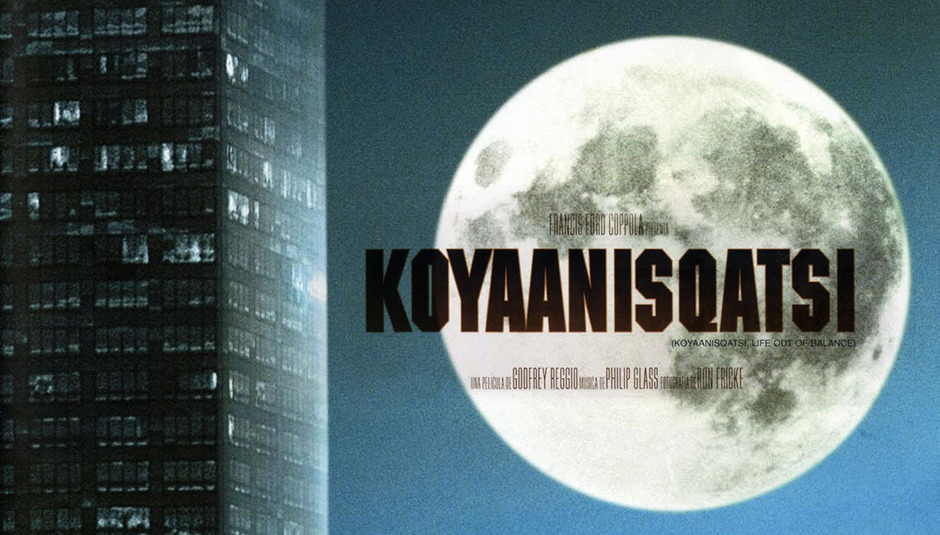 ko.yaa.nis.katsi (from the Hopi language), n. 1. crazy life. 2. life in turmoil. 3. life disintegrating. 4. life out of balance. 5. a state of life that calls for another way of living.

This definition appears emblazoned across the screen above the Barbican stage at the end of tonight's performance of Koyaanisqatsi. Hardly the chirpy seasonal message tonight's audience might be hoping for—but while despondent, it's crucial to understanding and interpreting the work that we've all just borne witness to.

The 1982 film, directed by Godfrey Reggio, is a speechless, narrative-less collection of vibrant and powerful images of our world and its inhabitants. Narrative-less, however, does not mean incoherent. Opening with panorama shots of vast and long-forgotten expanses — the world before its current state of ‘turmoil’— the film quickly traces our planet's path from its nascent to present state, juxtaposing character portraits with emblematic shots of buildings being demolished and busy highways during rush-hour.

For his part, Philip Glass soundtracked the (almost) ninety-minute film in its entirety, allowing for only the briefest of breathing moments among his relentless minimalist constructions. Glass' music, which uses both traditionally classical and electronic components to warp the comfort of repetition into something both violently incessant and gently hypnotic, is beloved by many. Tonight, at London's Barbican, the Philip Glass Ensemble are assembled alongside the Britten Sinfonia and Trinity Laban Chamber Choir to perform a new arrangement of the piece. This, the second of two concerts celebrating the life and work of the composer (now a dignified 75 year-old), is a robust and unrelenting performance of the work, with conductor and musical director of the Philip Glass Ensemble Michel Riesman steering the music in its tricky film accompaniment role with aplomb. It's important that the relationship between live music and film is just so. While Glass is an esteemed member of the minimalist elite — a musical style concerned with extracting the most from a limited resource of material, however protracted and unremitting the results — he's not afraid to insert abrupt changes in his music where appropriate. Tonight, those sharp turns are timed to perfection to coincide with similar changes in Reggio's film. The result either marks a brusque end to Glass' constantly shifting sonic jigsaw — something not unlike being slapped out of hypnosis — or the opposite, the viscera of his music seemingly pouncing out of nowhere. Regardless, it's always something intense and wholly engrossing.

Elsewhere, bass vocalist Jeremy Birchall's fantastically menacing appearances at either end of tonight's performance (KOY-AAN-IS-QA-TSI, he sings, low enough that you'd be forgiven for literally trembling in your seat) are a highlight, a brief moment of focus among a musical style that otherwise feels like a deep, latent meditation. Glass himself, on the other hand, remains quiet and understated in his position onstage, often just filling in sturdy keyboard bass notes where necessary. Tonight, he's one of two keyboardists on stage, opposite Ensemble member Mick Rossi, who must be applauded for carrying the burden of those lengthy and numerous arpeggio passages, those that demand an outstanding level of stamina and dexterity.

Philip Glass' lengthy (and, as the gentleman solemnly walking around the Barbican pre-show with a cardboard sign that reads ‘looking for one Philip Glass ticket’ might argue, entirely game-changing) career is indeed something to be celebrated. His music preempts a large proportion of that (particularly electronic) music which we listen to today. So at the film's finale, with the Barbican Hall immediately rising to their feet for a standing ovation, it's a pleasure to see that this continues to be celebrated. In Photos: The Black Keys @ Mancheste...