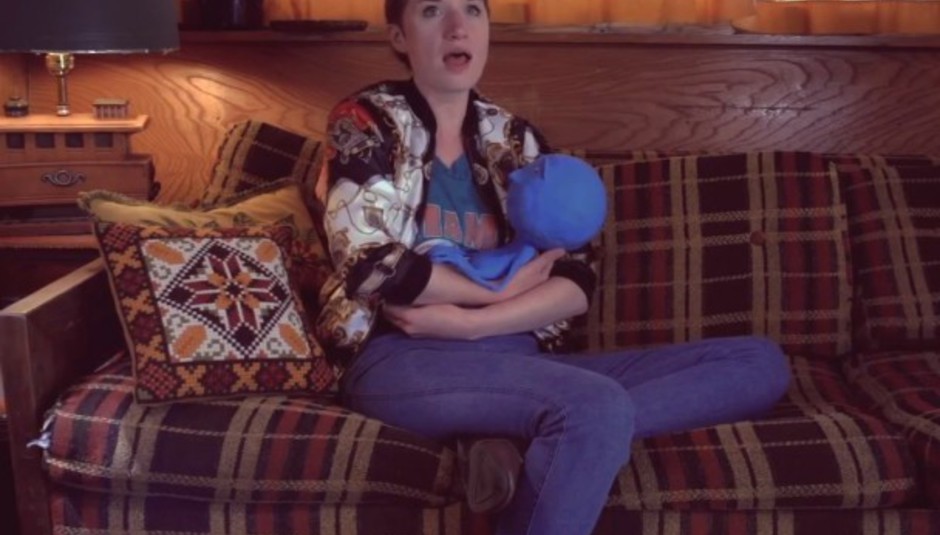 Sometimes it only takes one perfect line, and one perfect melody to which that line is sung, to make you fall for a song. I feel like this about the bit in 'Ivory Coast' when Sarah Versprille sings 'I know that you will love me till my eyes do close; you’re what I love the most.' It's something to do with the chord sequence, and how it has all the grandeur of a torch song. In the video, PBC's Sarah falls gawpily in love with PBC's Daniel. But then he fucks off, leaves her holding the (spindly, blue) baby. What a shit.

Vessels - ‘The Sky Was Pink’ (Cuckundoo)

Vessels' take on Nathan Fake's 'The Sky Was Pink' is a statement of intent and marvellous for these reasons: one, it is as ominous as the coat hanging out of your childhood wardrobe, soon as Mummy turned the light out; two, it is a BOGOF single, in which two melody lines (one nice, one nasty) parallel along, without messing with each other or becoming confusing, despite their discord; three, it has a magnificent sunrise moment, two thirds of the way through, as the bashed drums, dulled organs and furious snares disappear, only to return, all the more furious, forty seconds later; and four, it is one of those singles that builds, beautifully - almost to the point that it is impossible to turn off. Endeavour!

Dobie has been around for long enough to know a thing or two about relentless pace. 'I-Anomaly' - though notionally in the ballpark of acid house - is marked out, however, by the sheer number of glittering hairpin turns it makes. Sumptuous, golden bassline, anawl. It is 'the song most likely to make fireworks happen in your brain,' this week.

Tame Impala - ‘Feels Like We Only Go Backwards’ (Modular)

Rules are made to be broken, which is why we will let Tame Impala get away with their absurdly en-pointe Lennoning. Even though the logic for Why We Let Tame Impala Get Away With It When We Don't Let Wolfmother Do Likewise, is malleable as the plasticine in their video. As I listen to this, my shoulder devil is jumping up and down, shouting 'You cannot justify LIKING TAME IMPALA.' But as soon as I spy that little red uckfer waggling his shiny pitchfork, I flick him away.

Oho, Bonnie 'Prince' Billy has written a song about how he thinks Jesus is well good. 'Christmas Eve Can Kill You' is also about why you should put your decorations up this afternoon, why he loves all the shopping Christmas gives you an excuse to do, how much he likes the new John Lewis advert because of that bit with the robin but also because like, that singer? Has taken The Power Of Love? And like, really made it sound cool? And indie? 'Christmas Eve Can Kill You' is also about why it was wrong for Morks and Spankers to get rid of Twiggy because you should not do that.

About a year ago First Aid Kit released 'The Lion's Roar' for the first time, and I wrote about it, here). You'd think, by now, that it would sound less heartening. Not a bit of it.

I used to think that if you had experienced a musical movement first time round, you were predisposed to despise it when it inevitably reappeared, 20 years later. But since my familiarity with goofy 90s breaks (of the sort present on 'Junk') was limited to what I heard blasting out of ruffians' tapedecks up tan, as a yoot; and since a large part of my youth was taken up thinking Jesus was really, really good; 'Junk' might as well hold the shock of the new. It hit me square in my happy place and there was absolutely no shifting it.