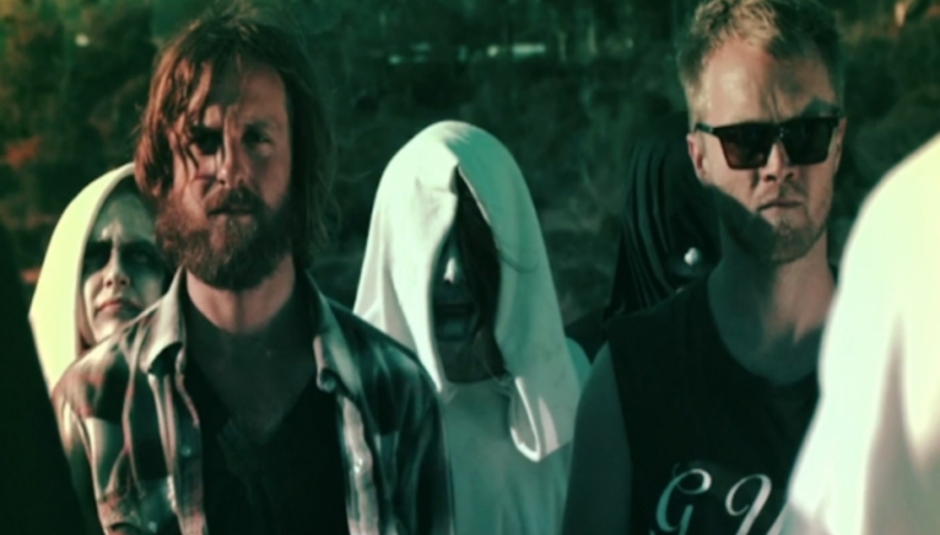 Two Gallants is comprised of San Fransiscans Adam Stephens and Tyson Vogel, who have been making music together since they were kids. The two-piece have built up a reputation for their literary leanings and live show, on occasion playing in random locations for a handful of fans. They've just released their fourth album, The Bloom and the Blight.

Earlier this month DiS got on the phone for a chat....

"Does modern music make you feel jaded, then?," I ask. There's an awkward pause on the end of the line.

"I guess I just don't think a lot of it has any longevity," mumbles Two Gallants' Adam Stephens. "I am coming around – I think there is some good music being made and there are some good bands, but I guess I would say that there isn't as much quality music being made as there used to be."

There it is – a carefully ventured statement few of us reading this want to hear, myself included. I hate it when people make generalizations like this. It's just curmudgeonly, right? Perhaps, but then again it may also be key to understanding the vibrant, defiantly old-school heart of Two Gallants.

'Craft' arguably isn't always a word we freely associate with a great deal of modern music, but speaking to the band's frontman it's evidently an approach he's utterly in thrall to, and one that's embedded throughout new album The Bloom and the Blight. There's been a five year gap between this and the last one, time which saw the two members of the band take a break from each other and Stephens try out his solo shoes.

"I'd never really played music with any other people besides Tyson," he reveals. "So just working with other people in that context made me very grateful for what Tyson and I have, certainly - the efficiency and ease with which we work on particular things, and just musically I guess. I was definitely educated just by listening to other types of music, and I studied a lot of theory. I figure that's added a lot of stuff to the new songs."

A car crash postponed the new record further, with Stephens unable to play guitar for something like six months, but the five year gap has made The Bloom and the Blight "a little bit more sophisticated" than previous material, he says, embellished with the tricks and techniques he picked up en route.

Thematically, I suggest it's a record that frequently veers between love and despair, desire and death. "There's more of those two forces at the helm," he agrees. "I do think that this record is a little bit more intensified as far as the theme. That split, that dichotomy between stark music and celebratory sounds."

"The title is based off of Tyson and I, I don't really know how it came about. I was kind of obsessed with the word 'blight' – I actually wanted to call the record 'Blight'. Tyson thought that was a little bit too bleak for a record title."

It sounds as though getting back in the saddle with Gallant number two has made him think a lot about how they complement each other? "Yeah, I think we're definitely spending a lot more time trying to make it work, and not getting into previous…" he trails off. "We've toured a lot together, and we've been in a lot of situations. Being in a two-person band, there are less personalities to deal with, but if both [the members] aren't happy the whole things sort of falls apart – it's not like a five-person band where if one person isn't happy the whole thing can still ride on.

"I think we've both matured a lot and grown to respect each other, to recognise each other a little bit more, to avoid discontent building up."

It seems there's a balancing act going on at the heart of Two Gallants, then. If Tyson is the optimistic 'Bloom' to Adam's more withdrawn 'Blight', it's clearly a partnership that works in practice – their new stuff is brilliant. But perhaps it's also a fragile alliance.

The band famously got its name from a Joyce short story, and there's always been an earthy storytelling streak running through their work, as exemplified on 'Steady Rollin', one of their best known songs. Does Stephens read a lot, and does it influence his songwriting?

"Yeah, I definitely read a lot," he states, more emphatically. "I guess I've always considered songwriting to be just another literary artform. I don't like to sing things without meaning them, so I just put in time to make sure something's worth saying instead of just saying it for the sake of saying it."

And what about The White Stripes? As the godparents of the guitar-driven two-piece, it's always lazy shorthand to stick a similar band in the same bracket. But there IS more of a blues rock leaning on The Bloom and the Blight, isn't there? 'Dyin' Crapshooter's Blues' is one of the most obvious examples.

That suggestion goes down like a le(a)d balloon. "No. Definitely not. I don't ever really listen to them. It's not that I don't like that band, I have a lot of respect for them and what they've done. They've made bands like us, as a two-piece, a more [acceptable] idea."

So you don't see Two Gallants as part of the same stable of DIY bands heavily influenced by blues and classic rock, like the Black Keys?

"Not really. I don't think we really play blues rock. There's a lot more country or even old time-y driven, folk driven… there's blues there a little bit, but the Black Keys are definitely part of the blues, they're more of a blues-oriented band than we are."

Over the course of the interview it seems pretty clear Stephens is at pains not to pigeonhole Two Gallants. He's not exactly prickly about my questions, but I still don't really feel I've learned that much about the new album apart from what's on the press release. It's a little frustrating. Perhaps I need to brush up on my interview technique. A crackly phone line between London and Alabama isn't helping.

But then he comes right out and says it, and all I can think is 'fair enough'.

"Honestly I don't really think much about our records. We focus a lot more attention upon our live shows – that really is where we exist.

"The rest of it is just…the record is for people who can't come to the show really. I guess it works to spread the word a bit more so people will hopefully come to see us, because [live] is really where we're a bit more comfortable."

It seems a slight contradiction considering the craftsman's approach to both lyrics and music Stephens has extolled during our conversation. Then again, it sort of makes perfect sense - Two Gallants is clearly a two-headed beast in all manner of ways.

The Bloom And The Blight is out now.