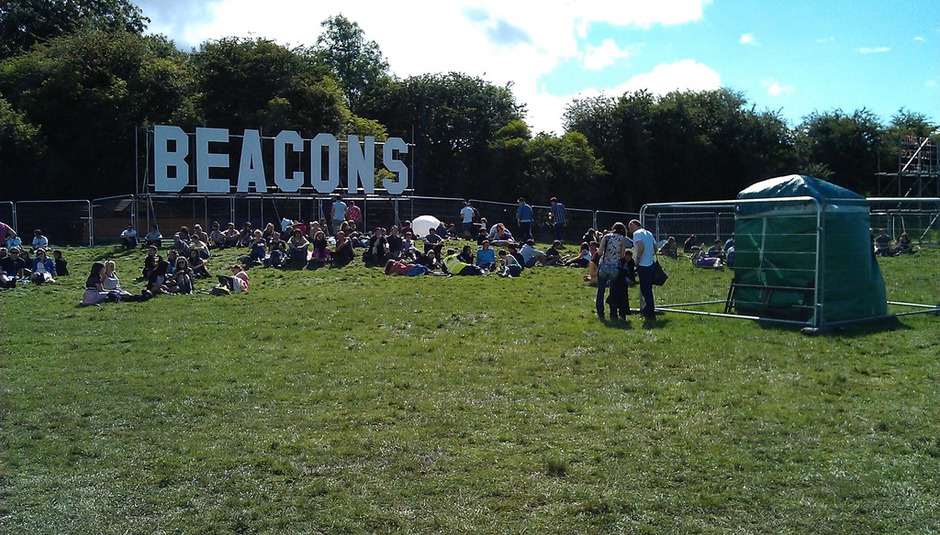 The 2012 Beacons Festival was light years ahead of the 2011 edition, in that it actually happened. Rob Cooke and David Edwards were on hand to report.

Let’s have another crack at this then shall we?

It was a beyond disappointing when last year, having signed up to cover the inaugural Beacons for DiS, all I got to write was a last-minute news piece saying the bloody thing had been cancelled. The organisers promised to return in 2012, but the torrential rain that tormented Yorkshire last Wednesday induced frightening flashbacks of last year’s flooded site. We needn't have worried though – team Beacons pulled off an event of an outstandingly high calibre. (And it was on my birthday – thanks guys!)

Think of a miniature leftfield Leeds without the laddos; think of a hipster Latitude without so much middle class kookiness; imagine a budget Primavera programmed by the Brudenell Social Club, in a soggy field in Skipton. Beacons is a place where you can lose an hour of your Friday afternoon with G R E A T W A V E S playing the most elegant, invigorating drones, injected with flickers of math guitar and bracingly beautiful.

On Friday night, Savages are fearsome as the ruthless discord of ‘Husbands’ brings post-punk screeching into modernity. But it’s Peace who pave a third way for British indie-rock, between eccentric angularity and the proverbial landfill. Six months ago they sounded like Foals-do-Britpop; now they’re artful and intricate, with a bit of a – deep breath – swagger about them, but without sounding like PROPER LADS WITH PROPER HAIRCUTS.

Swim Deep have a similar air of Nineties nostalgia, with a carefree bagginess and a touch of psychedelia cloaking their Saturday night slot. ‘King City’, is a washed-out euphoric wonder with the year’s best refrain: “Fuck your romance / I wanna pretend / That Jenny Lee Lindberg is my girlfriend”. Earlier, Splashh were even catchier, with the beach party fuzz of ‘Need It’ becoming a captivating Krautrock carnival. Over on The Stool Pigeon Stage though, it was Japandroids who threw down the gauntlet to every other rock act on the bill. Who else can cram as much energy, angst, eagerness, emotion, likeabilty, accessibility, boldness and brilliance into a thirty minute slot? From, 'Hi, I’m Brian and this is David and we’re Japandroids from Vancouver, British Columbia, Canada,' their post-teen anthems come gratifyingly thick and fast.

By Sunday, the sporadic downpours have made the Noisey/Vice Stage look more like the vegetable tent at an agricultural show than a Mecca of northern DIY music. But that’s what it is, with Nope, That Fucking Tank and Mazes soundtracking a very happy birthday for yours truly. In particular, Sunderland’s B>E>A>K> brighten things up with their colourful bird masks, infectious brass and wonky, distinctly North-Eastern math-rock.

Back at the main stage, Willis Earl Beal makes soul music into performance art, his dramatic, devastating croon backed only by a reel-to-reel tape deck. He is mesmerising as he lunges at his microphone, flutters his cape and swings his mic stand around. Then he takes a seat and gently lulls us into a tear-jerking ‘Evening’s Kiss’, only for us to find ourselves welling up again an hour later as Willy Mason transforms ‘Strong’ into our generation’s ‘Blowin’ In The Wind’.

By contrast, there’s no tears, only tantrums when Cloud Nothings close the Noisey/Vice Stage. All hell breaks loose down the front as they thrash out the bulk of Attack On Memory and even temporarily losing my specs in the pit doesn't detract from what a powerful 15 minute onslaught of grunge perfection ‘Wasted Days’ is. With a finale like that, Beacons is well on its way from being the-festival-that-never-was to becoming, we hope, an annual getaway for years to come. (RC)

Seeing as Robert was covering the majority of the festival, I thought I'd chip in with my assorted highlights of a splendid few days. And my word, they were some damn fine highlights.... (DE)

As ethereally pretty and elegant a way to shake the cobwebs of a heavy night as you could possibly imagine, those who watched The Magnetic North’s sublime midday curtain raiser will count themselves thankful for the early excursion. A sublime blend of wistful folk, surprising bursts of intensity and a gloriously woozy atmospherics; Simon Tong and Erland Cooper’s wondrous side project (showcasing their debut concept album about the Isle of Orkney) was captivating from start to finish in the cool morning air. But the limelight belonged to lead singer Hannah Peel, with a voice of pure beauty and the most enrapturing smile and sweetly shy stage presence of the entire weekend, bathing the whole project in perfect luminosity.

Praising Wild Beasts for being outstanding is starting to become a little like praising Lionel Messi for having 'a pretty good game' but their glorious evolution continues apace and with true aplomb. With an ebullient atmosphere that could easily have passed for a hometown gig, they showcase just why they should be promoted to headlining slots at major festivals very soon. Exquisite melodies, a mystical musical chemistry and a setlist comprised of effortlessly brilliant tracks and absolutely no filler; they’ve become a band with no apparent weak point. And their songs are becoming modern classics in their own lifetime. If they can make another record anywhere near the equal of Smother and Two Dancers, they could be set for an Elbow-style breakthrough very soon.

Oh, my. Quite wonderful. In the packed-to-the-canvas Noisey tent, The Wave Pictures managed to make their 30-minute afternoon show something truly momentous and life affirming. With immediate pop-rock songs crafted with intellect and maturity, wistful melodies, Afrobeat influences and exceptional musicianship; they simply captivate the crowd, who respond with a mass outbreak of joy and dancing, forgetting the mud and the rain outside. David Tattersall makes stupidly complex guitar parts seem effortless, the band look like they’re having the time of their lives and I get that glorious 'festival moment' during their final song as I decide to go completely barmy down at the front. Not just one of the highlights of the weekend, but of live gigs in 2012. Sublime

As last minute replacements for Clock Opera on the Stool Pigeon stage Saturday afternoon (I’m still impressed they got them in time… was Andy Falkous found by chance in a local pub or something?), Future of the Left waste no time in kicking events royally up the arse. Falco is in endearingly scabrous and deadpan mood as ever; comparing the keyboard to 'an elderly, racist relative' and then querying why Margaret Thatcher isn’t dead yet. This of course, plays second fiddle to a terrific set in which the biggest crowd cheers are reserved for superb renditions of ‘To Hell With Good Intentions’ and ‘Lightsabre Cocksucking Blues’ but the finest and most totemic musical moments come from stunning versions of ‘Arming Eritrea’, ‘Manchasm’, ‘Robocop 4 - Fuck Off Robocop’, ‘Failed Olympic Bid’ (introduced with the line “Sebastian Coe is still a cunt”) and a monumental ‘Sheena is a T-Shirt Salesman’. There aren’t many musicians who manage to take an incredible legacy and then better it, but that’s precisely what Falkous, Egglestone and company are in the process of doing right at this moment.

There must be a degree of anxiety within Factory Floor, knowing that when their album finally drops, it’s going to be picked over with the finest of hipster toothcombs for bobbles and flaws in their hypnotic fabric. But for now, they don’t show it. Despite a somewhat bizarre scheduling (they REALLY aren’t an 8pm act with the sun still up), they are as subtly compelling, serotonin-bothering and as mysteriously intoxicating as they always are: shifting progressive and minimalist electronica and techno into an entirely new league. If their record contains as much subtle wonder as their 30 minutes here, there shouldn’t be a lot to complain about when it finally arrives in our hands. They’re in a class of their own.

And so to the end: clutching a flagon of real ale, caked in mud and attempting to start a conga in the Stool Pigeon tent. For such moments of absurdity, Toots and the Maytals are really the only appropriate way to go out with such a celebration of communal joy. They’ve just got it all: from songs matured over decades, to superb musicianship (the super-fast coda of ‘Monkey Man’ being especially brilliant) and Toots remaining the most warm, engaging and bizarrely ageless frontman in reggae. It’s a joyous and appropriate close to one of the friendliest, warmest and most inviting festivals I’ve ever attended. With a bit of sunshine next year, this little festival really could blossom into something a bit special. As it is, it was still profoundly memorable. Here’s to next year…hopefully without the downpours!

(Special mentions also go out to D/R/U/G/S for their euphoric Friday night show, Ghostpoet for a sensational lesson in communal soulful beats and Patrick Wolf for his spellbinding “acoustic” set with just a grand piano, ukulele and a string duet. There just isn’t enough space to give out detailed acclaim here. Oh, and kudos to the Whitelocks Craft Real Ale tent. You cleaned out my wallet in double-quick time, but it really was worth it!) (DE)