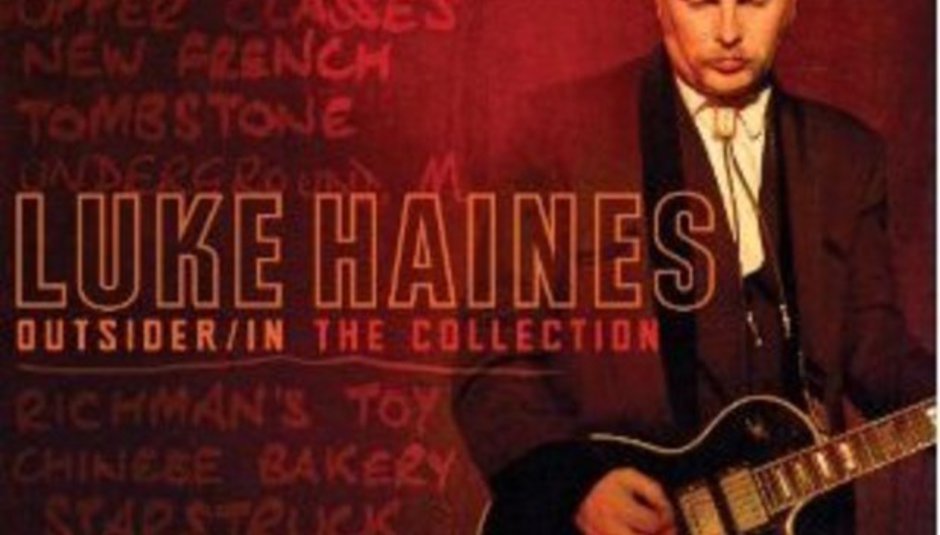 Luke Haines: Where Is The 'Outside' and who are the 'Outsiders?'

Luke Haines: Where Is The 'Outside' and who are the 'Outsiders?'

To mark the release of Outsider / In: The Collection, a compilation of recordings by Luke Haines, we asked the man himself for some brief thoughts on his favourite "outsider" music. He sent us this missive instead...

"The word 'outsider' is getting bandied about a bit at the moment. Actually it's not, but it does crop up in a few reviews of a compilation of some of my old bits and bobs called 'Outsider/In' (I think that's what it's called, I'm not going to check). Drowned In Sound asked me to write a piece for them, something along the lines of my favourite five outsider musicians. 'Ok I said.' Then I started wondering (actually I'd been wondering anyway) what is all this 'Outsider' business about? Does it mean any thing? Is anyone involved in anything creative an 'outsider' and what are they on the outside of? Questions and answers. That was the name of an old Sham 69 single. I doubt if they were singing about 'Outsider music' or 'Outsider art' though.

The term 'Outsider Art' is derived from 'Art Brut' coined by artist Jean Dubuffet to describe art created outside of the art system – galleries, art schools, critics, polite society. Much of the Outsider Art that Dubuffet was interested in was created by asylum inmates, and so Outsider Art – like Outsider Music – is now often associated with people who have psychiatric issues. I've met loads of artists and loads of musicians and they're all fucking mental, so does that mean that they're all 'outsiders?' Who knows. Anyway, Dubuffet said that Art Brut wasn't just about the folks getting their heads rethreaded. Speaking of which, I went to a shrink once. I wasn't feeling particularly mental at the time, actually I was quite happy biffing about, sometimes laughing my head off, sometimes getting a bit cross. No, I went to the shrink as a sort of experiment. It didn't work out that well, we had an argument about how to wash up a cup properly, and then the shrink told me that 'everyone is mentally ill'. Well, you would say that, I thought. But then if we're all mentally ill, does that mean we can all be outsider artists? Perhaps 'Outsider' just means to be outside of the mainstream, that makes sense. But then, what is the mainstream?

In music, there are about seven people in the mainstream, you know, the types who are always in the tabs with their tattoos and divorces. The rest of us, swimming about outside the mainstream gaze upon the seven people in the tabs like they're in a carnival freakshow. So if they are the freaks, are they also the outsiders? And if we're talking about freaks what about our ghastly shower of politicians and their weird Bullingdon lineage, all that caper – rather outside of mainstream society I would say. Maybe the closer to the heart of the establishment you get the more outside you become, in which case the Royal family must be the ultimate outsiders. Imagine them, pottering about in their castles, talking to God, doing what the fuck they like. Does it get any more 'Outsider?' I think I'm gonna redefine this 'Outsider' remit, and do what the fuck I like. I'll write about five great people (not all musicians) who just do/did what the fuck they like/d.

Until a month or so ago Bruce Lacey was nowhere to be seen, now he's all over the place (sort of). The artist Jeremy Deller has made a film about him, and if you're a lucky London person you can go and see an exhibition of his life (for free) at the Camden Arts Centre. Lacey (born 1927 and still going strong) had initially wanted to be a fighter pilot, but after a year long battle with TB, he had a rethink. He thought; I'm going to do what the fuck I like. So he went to art school and became an artist. Bruce didn't like art school much, and art school didn't like him. It didn't matter, by the early sixties Lacey was involved in a surrealist trio called The Alberts. The Alberts were great – a sort of precursor to the Bonzo Dog Doo-Dah band and Monty Python. They made strange little films, and put on little shows called things like 'An Evening Of British Rubbish,' unlike the Pythons though, The Alberts were actually funny. Bruce also had a thing about robots, and he would often appear at '60s happenings with hulking great robots that he'd made out of junk, freaking out the tripping hippies. He even made an appearance in The Beatles film 'Help.' I don't remember it though. I try and avoid the Beatles, I find them depressing. Maybe I am mentally ill after all. It's pointless trying to sum up Bruce Lacey in a paragraph. He's into ritual magic now, he might be at the bottom of your garden chanting an incantation to the Earth Goddess or something. You'd be the lucky one if he was.

Long before Yoko Ono became the 'John' revisionist and the chief broker of brand 'World Peace' she was a 'proper artist.' She also made a couple of astonishing albums which I'll come to. We all know the story, Fluxus, the New York Art scene, Indica Gallery and meeting then marrying John Lennon in good old racist Great Britain of the '60s and '70s. Yoko's first major transgression in the eyes of the moptop loving public was getting John to record the mainly rubbish 'Revolution 9.' Actually on the rare occasions when I hear a bit of 'Rev 9' I do quite enjoy it. Much more than when I hear any other Beatles songs. So maybe Revolution 9 is quite good – but it can't be, 'cos it's just a crap rip off of 'music concrete,' but then can it be music concrete if it's stuck on some bazzillion selling Beatles album? Music Concrete can't sell bazzillions can it? I'm fucked if I know. Maybe 'Revolution 9' is the Outsider Music of the Beatles canon. The piece of Outsider music that everyone knows. Anyway, after the 'Revolution 9' conundrum John and Yoko's next bit of non people-pleasing involved taking a photo of themselves naked and un-airbrushed and putting it on the cover of their 'Two Virgins' album. In 1968, this was a very brave thing to do. I mean, it was also a bit attention seeky, but then isn't all art? The record was sadly still rubbish. But then the records got really good. 'Yoko Ono Plastic Ono Band' is the one, released concurrently with the 'John' album of the same name. YOPOB (as no one calls it) is, as Alan Partridge almost said, only the band the Beatles could have been. John's on it thrashing away, and Ringo. And Yoko, with her now perfected witchy 'vocals.' So yeah, YOPOB it's heavy as fuck and spooked with it. You should buy it, and if you like it get the equally great and epic follow up 'Fly.'

Of course, I hadn't heard of them until I read Julian Cope's fine 'Japrocksampler.' Les Rallizes 'career' didn't really take off until it had well and truly hit the skids. In 1970 the Japanese media revealed that the bass player with 'Radical music black gypsy band' Rallizes Denudes had taken part in a Japanese Red Army operation to hijack a plane, diverting an internal flight, and eventually landing in the preferred destination of, erm, North Korea. The fallout from all this forced main songwriter and leader Takeshi Mizutani deep underground where the Rallizes myth grew over the next two decades. Mizutani didn't like studios, so there were mainly only live recordings, he didn't much like record labels, so there are hardly any official releases. Mizutani didn't really like writing songs either, so the same dozen songs appear sometimes re worked, sometimes renamed on endless bootlegs with really good titles like 'Blind Baby Has Its Mothers Eyes.' But what does it sound like? The three chord apocalypse that's what. Music that your mother would hate – actually everyone would hate, your girlfriend (Cope makes the very salient point in Japrocksampler that there are no female Rallizes fans. He's right), your friends, everyone except you. So does all this make Takeshi Mizutani an 'Outsider?' Almost certainly. Did he want to be an outsider? Probably not, and was he doing what the fuck he liked? We may never know.

Stanley Spencer was about as far from an Outsider Artist as you can possibly get. He was knighted and could possibly be described as quite 'middle England,' but before a time when middle England existed. He could also paint – none of that obsessive spidery mentalist daubing that Outsider artists do. Although in recent years a Guardian art critic named him as one of the worst British artists of the 20th century. The Guardian art guy didn't like all the religious stuff in Stanley's paintings, but duh, the Guardian art guy totally misread it. Spencer had a religious vision not unlike William Blake – he saw resurrection everywhere. Especially in the village of Cookham, in Hertfordshire, where he was born and lived most of his life. He painted Christs popping up all over the place, in the village pub, in the churchyard, and most famously preaching to the villagers at the Cookham Regatta. I stuck Stanley Spencer in a song once. It was called 'English Southern Man'. It's all right. Spencer wouldn't have liked it, I don't think. He wasn't a very pop music kind of guy. But then the song wasn't pop music, 'cos it wasn't popular. But it didn't matter as I didn't want it to be that popular. It must be an 'Outsider' song.

There is no number 5. Not yet, not until we have heard or seen what this country's greatest 'outsiders' our beloved Royal Family can create. We have seen tantalising glimpses; 'It's a Royal knockout', Prince Edwards showbiz streak, and I suspect Prince Charles may be a dab touch if you stick him in front of some scenery and give him a watercolour set, but until then it is – like all this 'outsider - dom' – mere myth speculation and conjecture."

Outsider / In: The Collection - a compilation of recordings by Luke Haines - is out now.