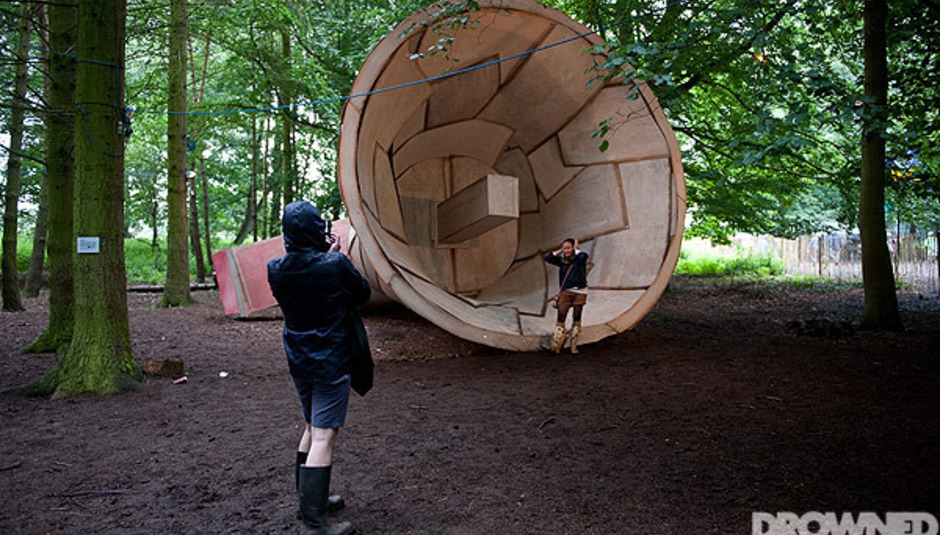 Yet, here I am, typing up a review of a festival and the first words I decide to write are "I feel blessed." Let me explain...

Swirling around inside my head there's this wuhwuh-woah (of M83), a wooooOOOOoooo-ooooo-ooooh! (of Yeasayer...or FUCKYEAH!-sayer as they will henceforth be known), and an ODB-inspired refrain of urrr, urrrRRRrre and uuhrrrrrrrr (of an audience at the behest of Chilly Gonzales, who is pretty much the high-tide line for high-class entertainment. Musicians, if you are never-ever gonna be that good, just quit already!). That's not to mention the whirl of actual words from Sharon Van Etten's 'Leonard' which are still swaying in and out of my consciousness. That's the soundtrack, and twirling around in the cinema tent in my mind are all these arms aloft making heartshapes (throughout Metronomy's summer-kickstaring set) and triangles (during Alt-J) and a sea of young pale hands, tapping morse-code patterns while pointing at pixels, trying to pop the beats, as plumes of sound zoom overhead (at pretty much at every show with synths). Then there are all these trees with orange and blue lights. There's the silhouettes of people in wellies wearing helmets with antlers, swigging long-and-slow (for half-a-verse of Bon Iver at least) out of cups that in the dark look like giant robot noses, but by day they seem less noir and sorta like super-sized children drinking from over-sized sippy-cups.

My head is also filled with words reflecting on lakes and orbs dangling from trees. There are juggling children wandering throughout my mind, but this is not peadageddon. There's Josh T. Pearson telling filthy jokes over and over, but this filth is making no attempt to crawl out of my ear and into the ether. Josh is now stained in there - inside my noggin' - forever (yes, for ever-ever) and them jokes ain't never-ever gonna leave ("what did the leper say to the prostitute...? You can keep the tip!")

Strangely, in these recurring visions, there's no mud only moss. There are picnic benches with whisky bottles and members of dEUS saying "would you like another one?" but no littered noodles. There are no queues for bars or showers. Stag dos don't make idiot comments as they wander past "I'm a bit mad me" theatre productions. There's not even that dead-body and woodchip smell near the toilets. No, none of that. My mind is merely full of songs of the siren, M83's spaceship synths (did I really tweet that it sounds like EDM-gaze? Apparently so...) and scenes from a surreality tv show entitled Where The Real Wild Things Really Are. I can still hear Glamour-and-Guardian reading girls chattering loudly about Lana's eyebrows. I can still feel Dom Gourlay's incessant enthusiasm washing away all my cynicism. I can hear myself telling everyone I bump into that dEUS were without a doubt the band of the weekend, and as I repeat myself over and over again, every so often my voice fades out and there's the sound of DiS' singles editor Wendy Roby whispering "this is the one that made me sob and sob and sob". I wish I could tell you that I want all of these voices to shit up, that I do not want to dwell in the past and to admit that I would like to get on with my life - like a non-crazy person - but instead I'm too busy holding my hands over my ears and shutting my eyes, trying to keep all the memories in.

Oh sure, sure, there's still a sadness in my head but it's from Low singing 'Especially Me' and Perfume Genius picking up a Casio keyboard in the DiS cabin and us filming him singing a song so intense and dark that I wanted to luxuriate in it (or at least slowly inhale it like a fresh pot of coffee). Of course, there's a sense of regret that I didn't see even more or explore more of the artsy stuff or watch any ballet or see Lang Lang or catch up with all my friends, but there's this hope in my heart that next year will be even better, drier, more productive and that less acts will clash (although seeing 20mins of Antlers' glorious cauldron of ache, Polica's double-drummed alien-Rolling-Stones and having my body caressed by Chairlift's glittering 80s spawl is just about the greatest hour of live music I will ever see!). Sure, I coulda drunk less, tweeted less with Justin Vernon about how Bon Iver was so insta-Genesis that he might have inspired the next Sex Pistols... Every five minutes or so, these regrets are torn up and tossed like confetti in the breeze as I goosebump-up and my memory regurgitates all these snapshots. As I grin to myself, I can also see myself from above in an animated gif format, and yet instead of feeling like a drug-freak, I begin to realise quite how loud I was bellowing "Hold me like before, hold me like you used to... LIKE YOU USED TO!" (apologies to those of you stood around me)

Call me a drippy fricken hippie-dippie sentimental child of the digital revolution all you like, but after a weekend up in the woods and walking beside the lake, my love of music (and possibly humanity) feels re-invigorated, and yes, I feel blessed. There, I said it.

In Photos: Bat For Lashes @ Latitude ...