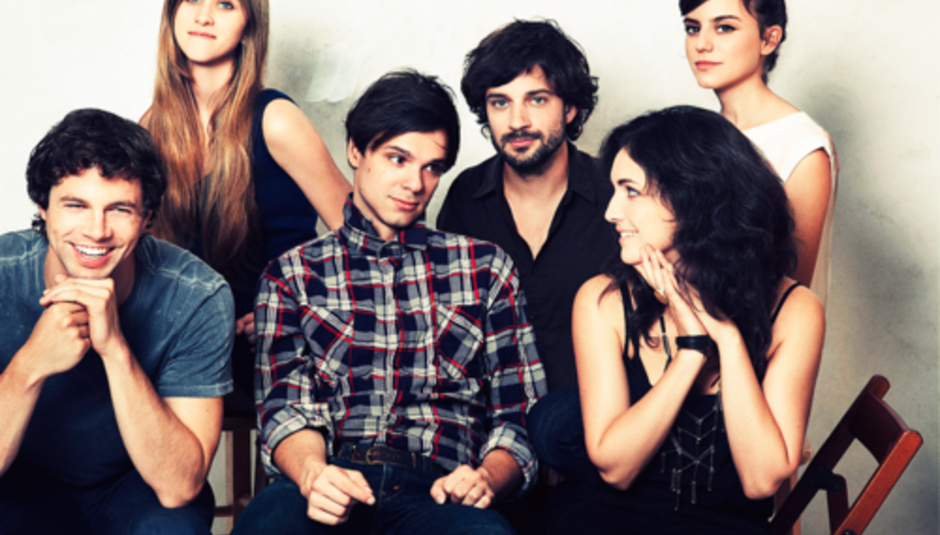 The handsomest band in Christendom have written a song which sounds like a warning, and it is the kind of song men ruined by witchy women sing to other chaps, to put them on their guard. I say this mainly because – and in the nicest way possible – it reminds me, at least in tone - of Space's 'The Female Of The Species'. Albeit a version of 'The Female Of The Species' that is also exactly as heavenly, un-gimmicky and, well, un-Space-like as you would expect a single by The Dirty Projectors to sound. Naturally there are a lot of 'ooohs' on 'Gun Has No Trigger', and I honestly don’t have a single bad thing to say about it. (This doesn’t happen very often.)

‘We Almost Lost Detroit’ comes over like an exceedingly jolly version of ‘What’s Goin’ On’, and it will insist on blethering on about ‘the babies’ as if anyone gave a fig. What’s slightly jarring is that, at its stompier moments, there‘s also something a little Maroon 5 ‘This Love’ about it. Now, personally, I have no problem with that, but I am well aware this is tantamount to wearing an Enemy t-shirt in these parts.

Allah Las sound like The Animals and clearly frequent excellent gentlemen’s outfitters; they’re so sharp, they’re bleeding. And if that’s all you want, that’s what they’re offering, but it’s a little too close to pastiche for me.

I like to imagine Field Music as the mathematical Phd Professors of indie; chalking complex, musical algorithms on the board as if they were so many one-plus-ones to them. They seem to find this so easy, and what I like in particular about ‘Who’ll Pay The Bills’, is that there are some Cosby Show-style keyboards you almost don’t notice in the background; also that there are, as ever, a hundred and one breakdowns, all of them magical. And again, this reminds us that it is not simply that Field Music are capable of conjuring beautiful moments; but that they know just how many to put in, and how long to linger on each one. Masterful stuff, really.

Because I am an old lady who takes half an hour to send a text message - one finger jabbing at the keyboard as if it were an urchin and I quite the Haversham - it took me at least, what, ten seconds, before I realised what Scuba’s single was actually called. And then I had a listen to its tinny 90s drumbreaks and decided it was marvellous. See, I used to have a theory that you couldn’t enjoy the revival of a sound or fashion if you enjoyed it the first time round. But I spent my teenage years down tan at the ice rink skating to Snap, and I still love the living shit out of ‘NE1BUTU’.

On which the techno shape-shifter that is Colin Bailey embraces his admiration of Gonzales. Breaking out the kind of piano people on beaches who have taken too much fun will weep over, ‘Waves City’ is beatific, button-pushing and unabashed. What I like, is that Bailey appears to have – at least here - given up trying put to willies up everyone in music. He even manages to get away with some of the cheapest, nastiest and most synthetic saxophone lines I have heard in quite some time. Some feat.

‘Melpomene’ is a single that veers. And if you're the sort of mean and naughty listener who allows a single 20 seconds to impress, you won’t get to the bit where it decides to become a piano sonata, and it bloody well does become a piano sonata, which is AMAZING. I mean, there’s been a lot of (frankly turgid) nonsense written about how dubstep has allowed artists to transform traditional approaches to lyrics and (in some cases) dispense with actual vocabulary altogether - but here, on ‘Melpomene’ it’s the keyboard lines that falter and sway in and out of focus instead. As strange, schizophrenic and wonderfully now as a thing could be. Very exciting.

Things I would not say to Tempa T after listening to his single:

If Tempa T so much as looked at Exlovers they would be blown clean over. So enjoy the contrast between him, and this, which is – comparatively speaking, of course – absolute wiffle.

In Photos: Preparations for the first...