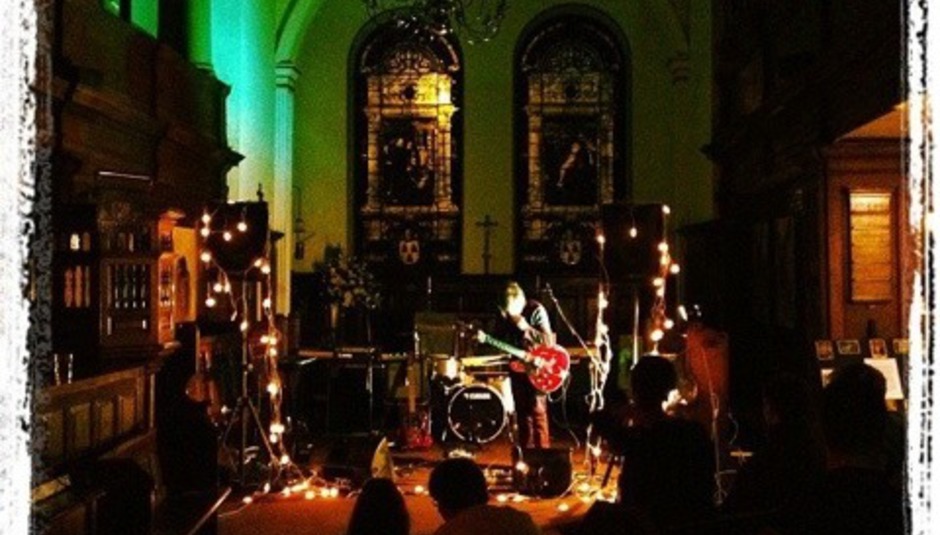 Thanks to the typically ludicrous conditions of the M6 Motorway hindering my journey back from Birmingham, I sadly only catch a few minutes of S I L V E R’s woozy electronic folk as it dances and bounces off the church walls - but it’s intoxicatingly pretty. By now, beers are being served in the vestry and there is a somewhat celebratory atmosphere developing on the longest day of the year, as the sunlight simply refuses to bow down into the evening too quickly.

Following on from S I L V E R are I See Angels, who put together a quite glorious thirty minutes of ethereal falsetto, gilded epic clamour and soaring songs that are as immediately welcoming as Doves but also pack a savage turn; as if Johnny Bramwell was taking over from Guy Garvey for the day and imposing fines for mistakes. Most reviews I’ve read tend to describe them as “Dream Pop” but I’d venture that they’re far more than that. In their complex approach to guitars and melody, they actually strike me as more related to the likes of Wild Beasts. Which is far from being a bad thing.They finish with a devastatingly filthy-bass led groove track that flirts with the gun-metal electronic rock of Queens of the Stone Age, before teasingly leaving us after just a couple of minutes. Impressive, with enough ideas to fill a truck, enough charm to impress your parents and enough underlying anger to stare down any opponent.

Manchester’s Air Cav - still promoting last year’s wonderful Don’t Look Indoors record that I reviewed for this website last December - seem to grow in confidence with each performance. A well-received UK tour earlier this year seems to have honed their live sound and they’re certainly here for the fight tonight. Right from the droning Godspeed-style introduction, before it merges into the tumbling, mountainous peaks of ‘A Call To Arms’, it’s apparent that Air Cav have developed a tougher, spikier edge than previously documented. The result is that the contrast between the darker and lighter elements of their music has become much more pronounced; with the resulting friction catalyzing their already epic songs to more potent realisations.

The likes of ‘Picking at the Bones’ and ‘The Way I Feel About My Life’ are perfect lessons in how to pack countless ideas into a song and yet retain the immediate anthemic quality that prods at the senses. Musically, they’re on absolutely top form tonight with Allan Gaskin and Oisín Scarlett making up one of the most succinct rhythm sections in the North-West, while Sophie Parkes and Chris Nield spar with each other through their respective violin, guitar and silk and sandpaper vocals. Nield appears notably angrier in his vocal delivery, spitting the lines out with a snarling purpose and scorn. But this contrasts with his warm between-song banter, thanking the audience (now spread between leaning forward on the pews, stood at the back or slouched on bean bags near the front of the stage) and humorously apologising to the audience for his guitar being out of tune during one of Sophie’s introductions. Yet, as soon as the music starts, he’s back at the microphone: eyes focused, spitting lines like bitter sweets engraved with beautiful words.

The most notable point of tonight comes with the new songs. They’re big and broad, more substantial and more maturely crafted than their predecessors, glittering with melody and stretching out arms towards the biggest stages. And tonight’s atmosphere befits the birthing of such songs as the soft lights flicker off the instruments and we all take in the perfectly-refracted sound from the unique environment. But the truth is that this music deserves a platform many times larger than this. During the spiraling climax of the closing ‘Crystalline’, Chris stands on the pew at the side of the stage, hammering away at his blood-red guitar and exhorting the band to take it that bit higher; give that bit more, before finally bringing the curtain down on the evening. It seems to signify a deeper metaphor. Air Cav aren’t willing to be introspective - they’re looking out and branching upwards. And the more they reach towards the stars, the more beautiful their music becomes. You only hope that their gilded trajectory will be more closely noted, tracked and traced soon. It truly is worth following…