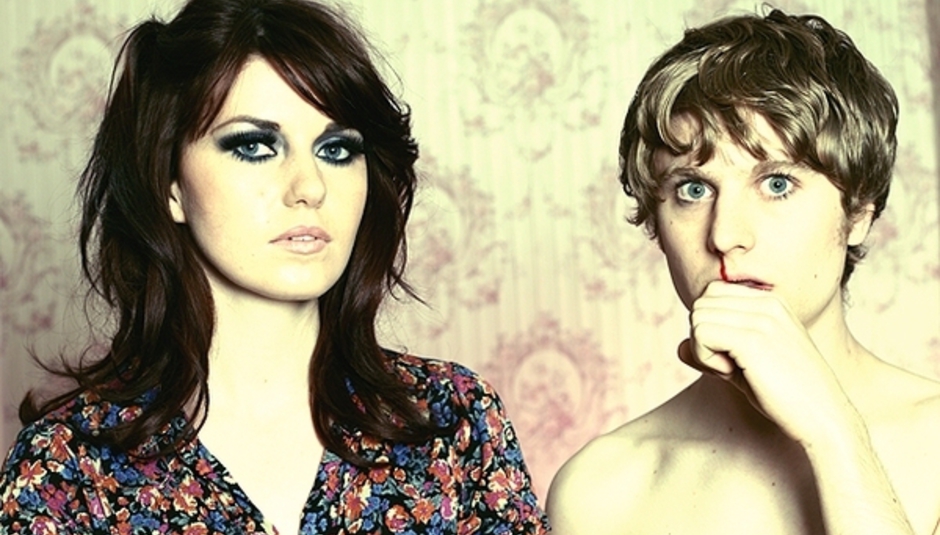 Sometimes, however much you prepare for an interview, it doesn’t always go to plan. Something that happened earlier this year when we met up with Blood Red Shoes to talk about their latest album, In Time To Voices.

Flicking through the racks at Rough Trade after the band's in-store, we waited and watched as Steve Ansell and Laura-Mary Carter took time to meet and greet waiting fans, including one overzealous lady who even successfully persuaded Steve to take his shirt off. Fans gone and shirts back on, we finally sat down with the band in the cluttered upstairs office for the interview. Then, just as we got comfortable the band were whisked away before we could say, ‘Twitter’.

The next day Steve texted to kindly offer-up more time. Meeting at a café in Islington Steve, a man not known for few words, in the space of less than forty-minutes let rip about the place of politics in music, the state of the music industry, how British music journalism sucks and in-between breaths spoke a bit more about the band’s new album. Like they say, sometimes the best plans are left unmade.

Here, in Part One of the interview, Laura-Mary and Steve talk about how an overwhelming desire to break-out of their comfort-zone was the driving force behind their latest album and how this brought them closer together as a band.

You’ve said that you set out to make an ambitious album. What were you ambitions at the start making In Time To Voices?

Steve: I’m not sure that we had concrete ambitions when we started the album.

Laura-Mary: We just knew for our own sanity that we wanted to do something different and more challenging because I think it’s good to set goals, really push ourselves, because it would be really boring if we didn’t and lazy on our part to try not to do things out of our comfort-zone.

Steve: I think there was a definite urge to get out of the comfort-zone.

Steve: Some stuff that we struggled with a bit. It was important for us to think, ‘This is hard, how do we make this good?’ ‘How do we do this kind of thing and actually be good at it?’

Did you feel that you’d got into a comfortable pattern on your other two albums?

Steve: Maybe a little bit, but I don’t think we realised that we were in a little bit of a comfortable pattern. I think also the second album we were so sure that we had to get down our live show, because we did feel like we’d fucked the first album up.

Steve: Not, like ruined it. A lot of people said to us, “it’s not really like what you are live, it isn’t quite as heavy as what you really are”. And, we thought about it and it was, ‘yeah, you’re right’. The second record was a lot of correcting certain misjudged things about the first record. Once we’d done that and now that’s our base, now we’ve done that thing that we are as a live band, punk-inspired whatever you want to call it rock band, … then you feel like, ‘ok, draw a line it’s time to move on with stuff you really want to do’.

Laura-Mary: I also think we wanted to show to people that there isn’t just one side to us that there is actually a lot more. We always knew that we’re capable of making music that’s quite different and even on this record I know there’s more in us. I guess, we’re just one of those bands that needs to keep growing.

How do you think you’ve developed since the first album?

Laura-Mary: We can play now, sort of [laughs]. I think we’ve definitely grown as people and musicians and, I guess we also understand how to write music that we actually want to write. We didn’t have a clue when we first started, to be honest.

Steve: I don’t even remember how we first started; it’s just a blur. It’s not like we got big over night, we’re not even big. That early thing as a band, we had so much energy for what we did and such enthusiasm that everything felt like it was fast even though, compared to a lot of bands, it wasn’t that fast at all. I’d say we’re really far from a big fucking band. I don’t know that early stuff; I feel like a different person.

Do you feel the dynamics are stronger between the two of you?

Laura-Mary: We definitely know each other a lot better, so therefore we play in tune with each other.

The record’s more varied for that and I think it’s a sign of security and how in-tune with each we are that we can relax about it and push some things where we wanna take it. ‘Cool, you’ve got a vision for this. What do you need me to do’. I think it’s made for a more interesting record and I think it’s a real sign of how close we’ve come as musicians to each other and how comfortable we’ve got. There’s no egos fighting like, ‘no! we have to both sing on this’.

Laura-Mary: We were never really like that, to be fair

Steve: We were never fighting over the songs. We both instinctively know when one of us has more of a vision on one of the songs and we allow each other space to take it somewhere; it’s a really unspoken thing and it’s definitely for the better.

You’ve spoken before about how you really got to know the studio on this record. How did that effect the way you wrote the songs?

Laura-Mary: For the first time ever we had own little space to write music in. Before, we had places where we’d have hourly rates where we’d go in whereas this time we had 24 hours, so we could put some recording stuff in there and that definitely changed the way our songs ended up. I could layer some guitars on other guitars and actually hear what it sounded like, whereas most of the time it’s in my imagination and it’s quite hard to write songs when you can’t hear what it can become. This time it was really cool to just experiment.

Steve: Being able to record and reflect.

But, you did experiment with Pro Tools?

Steve: It’s weird as a lot of things about this record has taken us back to our complete origins of what we what we did when we started the band. When we first started we recorded all of our own 7”s … and then we went through the stage with producers and on this record we finally had a space of our own - a recording set-up of our own and you’re in charge of every element of what you can do and you can hear the results and you learn fast.

Having that recording set-up to fuck around with taught us a lot about using a studio, so that when we got to the real studio we could use it to our advantage much more than before. Weirdly, I see it that we’ve come back full circle to where we started because when we started we did record ourselves.

Laura-Mary: We understand the studio a lot better now. We recorded the whole record before we went in and then it became quite a struggle, because we were quite attached to our recording. Actually, some of it ended up on the record.

Steve: Some of the demos we made are on the album.

Laura-Mary: More than any other record we’ve gone through every little detail and every sound.

Steve: Like, 'does this tambourine work in this section? Does this tiny little change here work?' We’d figured out all of it down to the ridiculous, meticulous details. I don’t know if people will be able to tell or not.

It does feel more considered…there are more quiet moments, which isn’t exactly something you’re known for.

Steve: We had to do that. It wasn’t like we sat there and were like, ‘we need to put some quiet stuff on there’. It was like, we have to get it out for our own sanity and show to public that there’s another side to our creativity. We’ve been jamming quiet stuff and messing about with it for ages, but never had the confidence to put it out. I think we needed to show to the public before it was too late that we can do this other sh*t and we’re not always going to be this thing you might know us for. I think this record is a gateway and fuck knows what our other record is going to be like.

When I first listened to the album I wasn’t too sure about it as I really like your last two albums and it wasn’t as immediate, but after a couple of listens it hits you and then you discover different tracks each time.

Laura-Mary: That’s what we wanted really.

Steve: We want people to discover things twenty listens after.

Laura-Mary: There’s a lot of detail and we knew it would be a grower.

How do you feel about playing the quieter songs live? Are you going to play them live?

Laura-Mary: Yeah, we will. I think it’s going to be quite a nice moment in the set.

Steve: I’ve just got this vision of when really cheesy rock bands do an acoustic set and the lights go low and a cello player comes on [laughs].

It gives people a breather in the mosh…

Steve: I think the cool thing about that is it’s not even the breathing thing, it’s just dynamics - a punch in the face is more a punch in the face if it’s quieter before it and then bang! Mogwai figured that out years ago. The structure of the record, you’ve got the quietest song before the loudest song and that’s completely intentional, it has more power.

I think in our live set it will have more power…we’re a three album band at this point we’re going to play longer sets as you can’t play an hour and a half of balls to the walls as it’d be fucking boring - we’d be bored and the people would be bored... You’ve got to be powerful at both things.

On the album you’ve experimented with pro tools, using loops, putting guitars through a moog. How are you going to do this live?*

Steve: We’re going to do it real however we do it. No backing tracks.

In Time To Voices is out now.