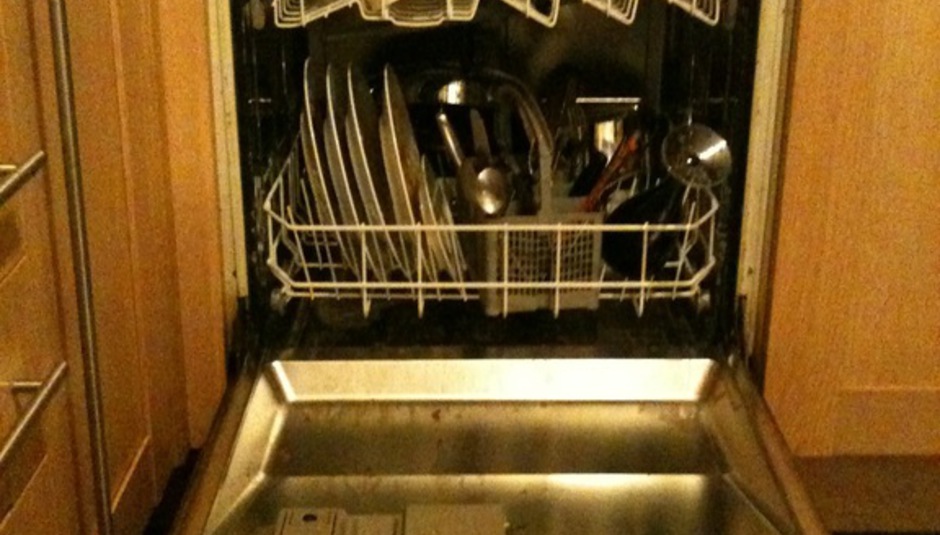 Ahead of the release of their new album, 'Crown & Treaty', Tim from Sweet Billy Pilgrim reveals the secrets of his recording process, including recording the door of a dishwasher...

"I guess if we should be remembered for anything, it would be that we were the first band to perform a song featuring a plucked dishwasher and the sound of a badly fitted grill pan squeaking and rattling in its mounting, at a televised music awards ceremony. Our Twitter profile refers to us as 'serial white goods abusers,' but that's possibly disingenuous. We're prepared to abuse almost any stationary, non-living thing if there's a chance it'll make an interesting noise when we do it. I've always liked the idea of integrating non-musical things into very musical settings. Much as I've loved bands like Einstürzende Neubauten and Test Dept, their bloody resetting of what constitutes music with its furious outpouring of hammered fire extinguishers and barely-controlled pneumatic drills can eventually seem like something of a dead-end, because extremity inevitably becomes non-inclusive. Perhaps necessarily so, as many things arrive, blunt and ugly, at the outskirts of popular culture and work their way in, progressively becoming more refined and therefore more acceptable to us as they do so. This can snuff the spark of what made those things so thrilling in the first place, but - for me - it was the adoption of that pure sound aesthetic by Public Enemy's production team, the Bomb Squad in the late 80's that ignited the biggest thrill of all. Creating songs from densely layered, often non-musical sources seemed almost miraculous to me, and despite taking a rather different direction with my band (to the immense relief of hip-hop fans the world over), I was overjoyed that all the music I heard as I stepped out of my front door; the chance harmony of a lawn mower combining with the bumblebee drone of a light aircraft; the windscreen wipers' free-jazz skittering across the steady rhythmic chuckle of a diesel engine; the unashamed joy in sound, could actually be willed into songs. My Uzi didn't weigh a ton, but - as I learned how to record my songs - my densely packed imagination almost collapsed in on itself under its own weight, like a slightly apologetic English black hole.

The first two Sweet Billy Pilgrim albums were an opportunity for me to take these found sounds and run them through guitar FX and loop pedals. To run them backwards, to chop them up and fold them in like so much Burroughsian aural confetti. But I always came back to the same question; am I doing this for the song ? If the answer was yes, then I was free to develop that thought. The song is the thing. Always. And those sounds might just be unusual and intriguing places in which to plant the seed of an idea; a better way to tell a story, perhaps.

Our new album, Crown & Treaty is a further distillation of that kind of storytelling. There's lots of sonic detail, but this time I wanted to weave those sounds even more seamlessly into the song, mainly so that they didn't distract too much from the voices, which it had suddenly occurred to me (embarrassingly late in my musical life), were the most unique and universal element in communicating anything musically.

But listen and it's there. There's a tuned metallic squeak in the introduction to 'Blue Sky Falls', which was the door of my new dishwasher being opened and closed very slowly. The song is in C#maj - a pretty unusual key for a guitar based song - and by amazing coincidence (I'm aware that 'amazing coincidence' might be overstating this, incidentally), so is my dishwasher. Where the song breaks down before the final verse, you can also hear my washing machine cycling lazily away in the background.

'Blakefield Gold' included an audio channel on my mixing desk marked 'Chair Punch'. Far from being another of those euphemisms for bizarre sexual violence, this came from my needing a dull, baggy bass drum sound that no self respecting drummer or sample library could provide me with. I ended up miking up an old leather armchair and punching one of the arms in time with the song, like Vic or Bob in one of their more demented musical moments, thereby achieving the requisite cheapness, with the additional, gentle realisation that being a musician is rarely a dignified business.

The iPhone was put to good use too, providing all the location recordings you hear on the record, including the demented tramp abusing the children's choir In Vienna, and the footsteps at the beginning of 'Blakefield Gold'. For that, Anthony listened to a metronome app via headphones for the tempo, and set the pace accordingly, while I did the actual recording of our clumsy stomping into my Voice Recorder app.

'Joyful Reunion' saw the first appearance of a Stylophone on a SBP record, and it feels kind of cool to be in the company of 'Space Oddity', at the same time as acknowledging a musical debt to Rolf Harris.

'Kracklite' needed a trumpet part, which - in the absence of a trumpet player - I managed to construct from samples, but in order to make it sound more real, I had to make it sound less authentic; ie. kind of admit to - and make a feature of - its synthetic-ness. In the end, I put the sample into iTunes, loaded it into the djay turntable app on my iPad and 'scratched' the part live onto an audio track, returning later to add vinyl crackle for - ironically - authenticity.

Finally, honourable mentions should go to the hand pumped Indian harmonium which features on many songs, and just seems to have a solemnity and sadness that the cheery accordion somehow lacks. The baritone guitar that forms the intro to 'Blue Sky Falls' and the heavy bits in 'Kracklite', which, falling pitchwise as it does somewhere between a bass and a guitar, can lead to hours lost trying to perfect the solo from 'Wichita Lineman'; and my kalimba, which gave me blisters like golf balls on my thumb as I assembled the verses to 'Blakefield Gold'. All of which, perhaps, is a little more detail than anyone needed. But as I proof read this, in between winces, my eyes are drawn to the phrase 'joy in sound'. That's what unites my record collection, my own music and my being the owner of two very ordinary ears in an extraordinary world of noise. It might deprive me of sleep on some nights, and of patience when it all arrives at once, but it never deprives me of inspiration.