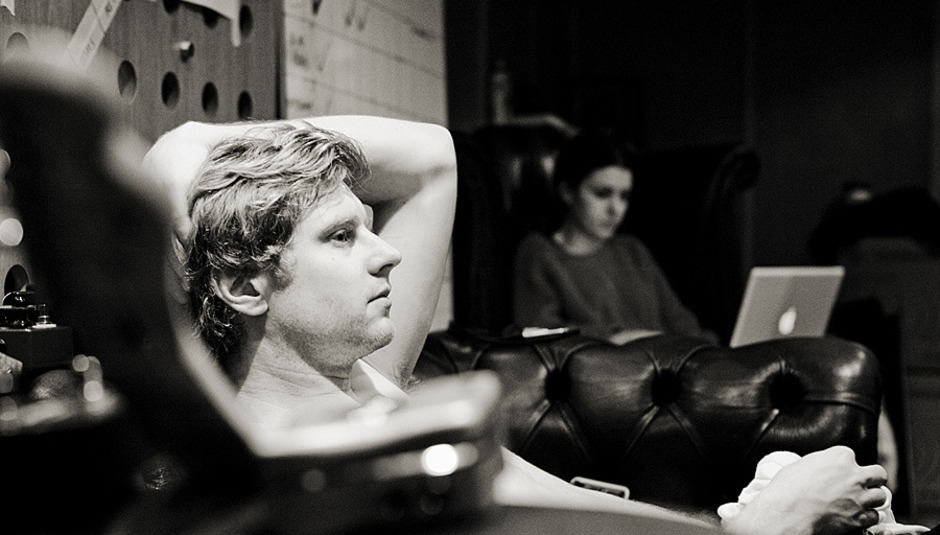 With a new album filled with life-disrupting guitars waiting in the wings, who better to ponder the apparent 'problems' with 'rock music' than Steven Ansell, one half of DiS-favourites Blood Red Shoes...

It seems to me that the real story here is that there are two ways that "rock music" seems to break into the mainstream and “succeed”. When major labels sign a new band for a big whack of money and agree to a huge recording and promotion budget, the onus is on them (via parent company/shareholders/good ol' capitalism) to get a financial return as fast as possible. So their approach is to take a basically unknown act and the force it downstream to The Public at the speed of light. I call this a top-down approach, for obvious reasons. It's a few people up there at the top of the pyramid with all the investment money picking a band and then pushing it downwards onto real people, hoping to make some bucks. For rock music, this almost never works. If it does, it's so totally unsustainable and short-term that the band rarely gets past that first album. It's like people suddenly realize they've been duped by marketing and jump ship.

Now the really successful rock music acts (success defined in terms of selling a bunch of records and playing big places, not successful in the sense that they necessarily achieve what they want artistically) starts from The Public and flows upwards from bottom to top. The bands who really break through into the bigtime have spent a long time building up an audience outside of the major label structure, through playing live and usually through independent labels, who despite having limited resources are way more prepared to take risks on bands. It's a much slower process but it means bands can develop and improve, sorta like Rocky training for the big fight. Muse for example, were bumped about between a bunch of labels before they really hit it big, and had been touring all over the world. The Black Keys have just sold out three nights at the 10,000-capacity Alexandra Palace after years of touring and putting out about a million records on various indies. Biffy Clyro put three albums out “under the radar” on Beggars Banquet before smashing it with Puzzle, Arcade Fire started out as a lowly Rough Trade band...Nirvana did not play two gigs at the Flowerpot in London and start an A&R scrum, know what I mean?

Yet the bands that a major label chooses to put its force behind? Joe Lean and the Jing Jang Jong. The Twang. Glasvegas. The Drums. Brother. And now, Spector. ARE YOU FUCKING KIDDING ME? When you look at it like that, of course it looks bleak for the future of guitar music. It's because major labels have a chronic inability to pick decent fucking bands. The recent couple of (chart) success stories like The Vaccines and You Me At Six give an insight to the kind of bands they're keeping an eye on – standardized, preset-rock that's so characterless and safe it's like they've been generated by some secret new piece of software locked away in the basement of the Universal building.

The way I see it is here's the problem: The Public at large love guitar music just as much as ever. The tidal wave of successful reformations is testament to that (The Pixies, Blur, My Bloody Valentine, Black Sabbath, Stone Roses, even At the Drive-In now). But access to anything decent is totally masked by the weight of promotion thrown at bands that are never going to connect to a wider audience because they're just no damn good. The great guitar music of the future, that much-needed “shot in the arm”, the exciting shit, is brewing up all over the place, but only a very very tiny amount is getting through that glass ceiling into the big leagues because that surface space is being taken up. Couple that with a novelty-obsessed media (this week! 55 new bands! All with terrible names!) where bands are immediately considered irrelevant after they've released one EP, and we have a structure that makes it very disheartening and difficult for bands to keep working at it long-term, building themselves up to that critical mass where they “crossover” (ewwwwww†).

To their credit, Radio 1 are playing more independent rock than ever - you can hear bands like Twin Atlantic or Pulled Apart By Horses on primetime slots, and I think this is a valuable starting point. But until the dominance of the major-label-backed short-term rich-kids-dabbling-in-rock-n-roll is properly broken, where do we look to? Well my eyes are on the bands around the fringes, just below the surface, the ones with the hunger for it, the ones who won't quit. Because in this climate only the really dedicated bands are going to make it through the net.

† = actually, in truth, I think bands “crossing over” can be a great thing when done right, I'd never have found the Jesus Lizard if Nirvana hadn't sold out would I?

Blood Red Shoes new track 'Cold' is available to hear HERE in a news story that also includes UK tour dates and info about their forthcoming album In Time To Voices.

"Success will buy us creative freedom"