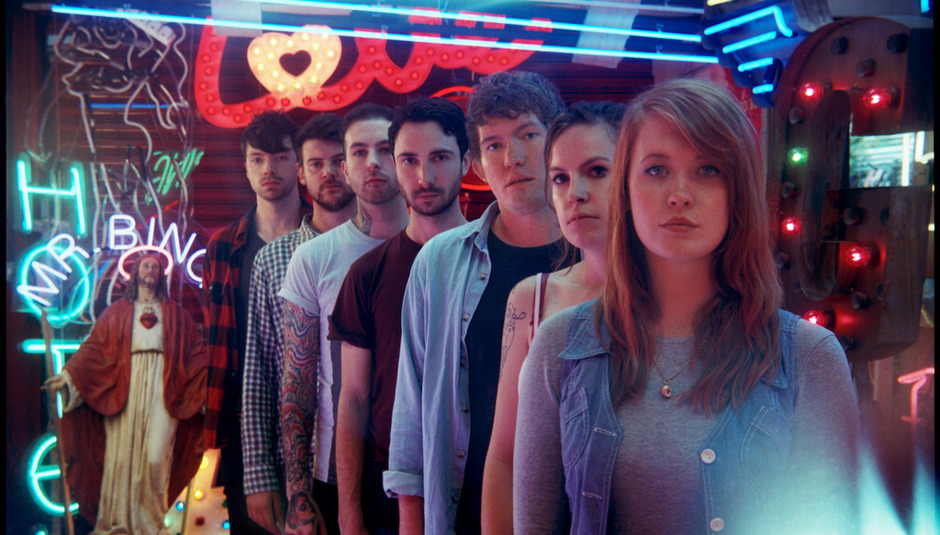 Los Campesinos! are just lovely. They're so engaged that I can't tell whether the journo before me who is interviewing them is a mate or not. Eventually, she says thank you and shakes their hands, so I sidle over. But before we get beyond pleasantries, a local homeless guy comes over with a paper cup and announces, "excuse me, sorry to bother you, but I just wondered if anyone can spare…seven hundred and fifty quid?" Laughs all round and, after a bit more chat and a promise that he won't hassle us again ("…for at least another 5 or 6 hours"), every single Campesino reaches into their pocket, and drops some silver on him.

It's the general aura of loveliness that the band exude (you could totally take them home for Christmas) that also means they're more modest than most in their position. Three albums in - Hello Sadness being very recently released - they show only the merest hints of being jaded by the industry - grazes at worst - and not a jot of pretension at all (even the accidental admission that they sometimes shop in Waitrose is quickly qualified with: "it's the closest shop to mine and Neil's house, and if you go in after 8pm you can get some real bargains. We follow the girl with the reductions gun around. I got two duck breasts for 59p").

And the same can be said of their latest: having seven members now (keep up!) means it's hard to strip back any sound too much but it is more stripped back than their last, Romance is Boring, or, indeed, anything they've done previously. And they think it's less pretentious for it, says Tom Campesinos!:

"The third record is when you're confident to just do what comes to you instinctively and naturally. We had the confidence to write a lot more simply. There was an element to the last album where we were showing off, and being antagonistic, and trying to make it difficult for people to get something out of it. I think we got that out of our system and now we've just tried to make the best album we could. Right from the start we just wanted to make a really clipped, coherent, good... pop record, really." The perfect match between pretentious and pop? Although the sound is more sober in places, the lyrics are still pretty legless - they've lost none of their humour, their joviality , their playfulness (sample lyric from a song with an ostensibly melancholic melody: "but here it comes, this is the crux, she vomits down my rental tux"). And sober's certainly not to say they've gone soft: there are still plenty of arms in the air moments, they just come from a deeper place. When I mention I listened to Sticking Fingers again recently, Gareth groans an 'oh no', like I'm his mom threatening to pull out an adolescent photo album. They're a bit older and they've got a bit more life under their belts, thank you very much.

'By Your Hand', for example, is a properly powerful way to open an album - especially one that has been re-written just a week before its recording, owing to the untimely demise of songwriter Gareth Campesinos!' long-term relationship. Fate is indeed a cruel mistress: "a couple of weeks before going into the studio, like only a week or two weeks, the relationship that I was in broke up. And, subsequently, the songs that I'd written that were from a happy, relationship perspective, were not songs I wanted to exist anymore. So the ideas for them were scrapped, and I started again."

See the video for title track Hello Sadnes for another tale of regret, revenge and broken relationships, all sorrowfully supported by strings, but be aware also that Los Camps are a band that refuse to be moulded by their press release - to stick to the story - and don't read too much into it. Gareth always writes his lyrics on the hoof: "That wasn't an unusual thing, because previously I'd not really made any effort write songs until we got into the studio - I only really am able to write under pressure. Writing words, when I'm at home in my room, I just can't do it. I'd feel like a dickhead."

That's not because of any lack of self-confidence, oh no - have you seen this man on stage? It's merely a self awareness that they're in a privileged position: "I think we still find it very uncomfortable being the 'people in a band' because we've come from the same going to gigs, posting on message boards, hanging out in the same clubs… but we just got in a lucky situation and wrote some songs people liked".

It's all a part of the humility that, in turn, seems to spur them on to serve up something special. Though they may not take themselves too seriously, they take that which they offer very seriously. They're a fan's band: they may hate the f-word, but it seems they feel a sort of duty of care towards theirs. From their blog to their new zine, Heatrash, it's all about giving back, and giving good.

Gareth: "As a band, we've always endeavoured to think outside - quote, unquote - the box a little bit, and by no means is what we've done revolutionary, but this is another way of doing that. I also think that there being seven of us in band, that's a lot of personalities that can't necessarily always get across in the music, so having Heatrash as platform for all our different interests has been really useful. And the volume with which people subscribe to it is testament to that - and it's been fun to do."

Tom: I think it's something that we'd like as fans, and that's still how we approach things: what we would we like our favourite bands to do?

Heatrash is largely the result of the addition of, guitarist and graphics guy, Rob 'Sparky Deathcap' Campesinos! And, of course, the changing line up - Harriet and Ollie having left since Romance is Boring - can't help but have changed their sound: "the new additions to the band have bought new things, and have really increased our creativity, and increased the scope for different excesses that we can go to, and different directions that we can take."

But, hey, not so much that you're not going to recognise it. They've still got a monster line up, and their still having a lot of fun with it. Perhaps even more so than it might appear, says Neil: "I we think we probably have more fun amongst ourselves than the music let's on, really. It's been an important part of the band to have been so many of us."

Just as it has always been the harmonies in which team Campesinos! excel, it's the choruses on Hello Sadness, when they're unified in rousing voice - from the haunting relentlessness of 'Death Rattle' to the shouty exuberance of 'By Your Hand' - that are the highlights.

And, of course, they still have that same respect for the 'people who like their music', which appears to be part of a mutually beneficial relationship:

Gareth: "The best thing is, people who like us are rooting for us, and want to hear these new songs - and sort of have faith in us that they'll like them more than the last batch of songs. And that's a really weird and lucky place to be in. But I think we're, well…their faith will be repaid."

Hello Sadness is out now.