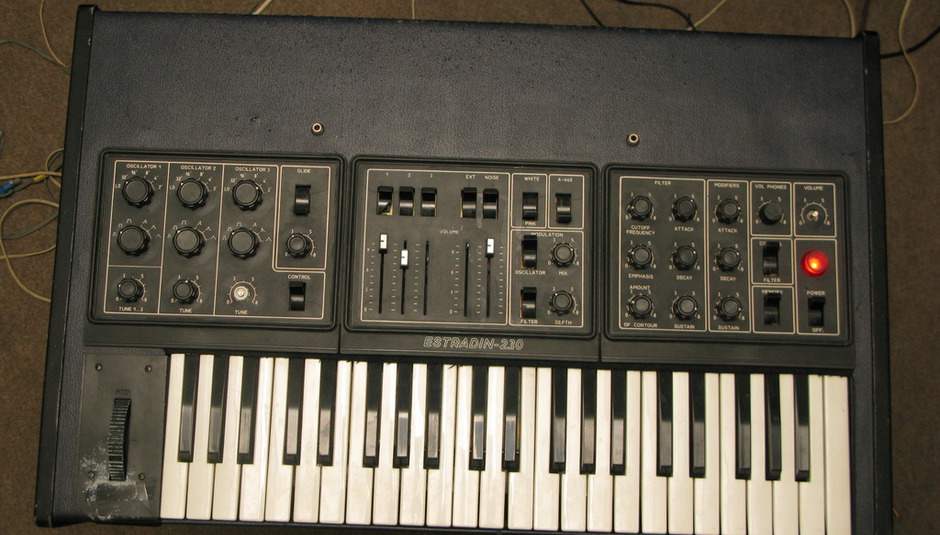 All week this week Apparat Organ Quartet kick off a new 'Planet Gear' irregular feature for DiS, in which we ask musicians to get a bit geeky and talk us through the equipment that makes the magic happen...

The Estradin 230 is a three oscillator synth made in the 80s by the Elektroizmeritel company in Russia. I got it when I was living in Helsinki in Finland in the year 2000. I was studying Finnish language, sitting next to silent people at bars and going to the sauna. I´ve always loved the classifieds ads and there´s a paper called Keltainen Pörssi in Finland. Thick as a phonebook, full of interesting stuff. I bought a few instruments that I found in Keltainen Pörssi. For example, my Roland SH2000 which has been the main bass synth of Apparat Organ Quartet, both in the studio and on the road through the years, was bought from there. Truly a great synth.

I saw the Estradin ad and found out that it was located in Tallin, Estonia. So I decided to take a day trip on a cruise ship to Tallin. On board there were mostly old people and alcoholics who were there just to drink and buy Tax-free beer to take home. They didn’t even leave the ship during its six hour stay at the Tallin harbour. I got to Tallin, found the address and it was a great studio filled with interesting Russian synths such as the Polivoks and others I don´t know by name. I bought the Estradin, no problem, and it was cheap as well.

On the way back, customs found it very odd that I was the only person carrying a synthesizer but not alcohol and cigarettes so they did a thorough search. They emptied my toothpaste and looked hard in my bag of M&M´s. I was lucky they didn’t put on the rubber glove.

The Estradin 230 is a marvelous synth, it makes the craziest sounds. It´s like the sounds are coming from a human throat at times but sometimes from outer space or an industrial plant. It’s not very stable in pitch but as a studio synth it´s great. It has played an important role in both of our albums, ranging from fat bass lines to noise oblivion. It also has a line-in so you can also modify any source of sound using its filters.

It was worth the visit to the capital of Estonia.