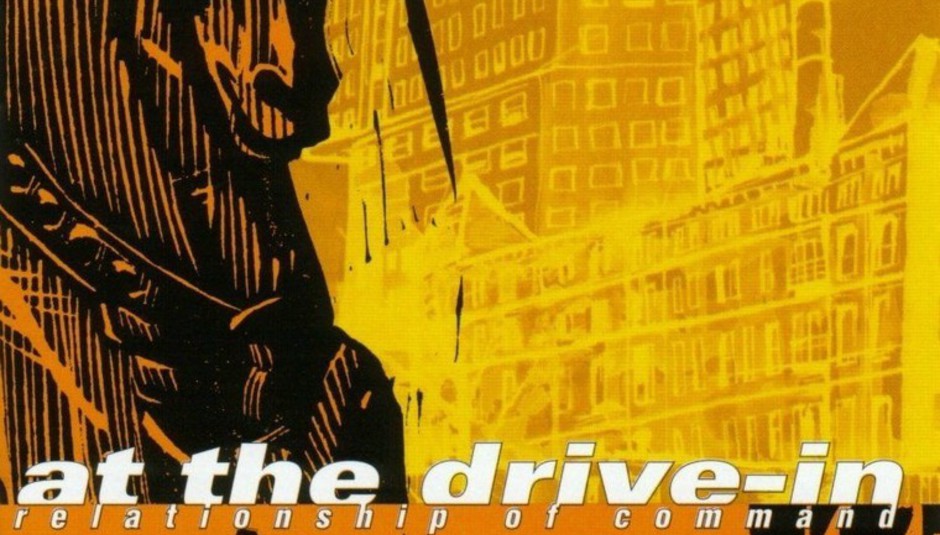 With the benefit of 20-20 hindsight, it’s remarkably easy to see why At The Drive-In’s third (and final) album was such an event release. A snake-hipped and heavy-riffed hardcore collection from an outfit of then-underground acclaim but no commercial pedigree, replete with lyrical tangents so obscured by a pure love of language that to follow them in earnest is to slip inside a black hole of never-ending dictionary referral, it’s not an easy listen on paper. But, 11 years on, a parallel presents itself – and Relationship Of Command becomes, instantly, its generation’s own Nevermind.

Think about it. Nirvana were relative unknowns, picked up by a major off the back of buzz for an indie-released debut recorded on a shoestring budget and suitably rough about its edges. At The Drive-In’s pre-Relationship long-player, 1998’s In/Casino/Out, might have represented a significant step forwards for the Texan quintet in terms of fidelity; but it’s a step comparable with progressing from boom-box recordings to taking eight hours to cut a demo in one’s local studio. Released via California indie Fearless, its potential reach had a very palpable ceiling. Via a deal with the Beastie Boys’ Grand Royal imprint, Relation Of Command was a Capitol Records product: from minor to major, in a single album (albeit via an EP, 1999’s Vaya, which wears its allegiances to In/Casino/Out rather clearer than its ties to the album that’d follow).

Nobody could accuse At The Drive-In of smoothing their sound’s more abrasive elements down for their shot at the big time – Relationship Of Command is pissed off plenty enough for it to shake through the punk-rock firmament as easily as its glossed hooks caught the passing mainstream. Just as Nevermind found space in its tracklist for thrash-around numbers, here ‘Cosmonaut’ and the opening ‘Arc Arsenal’ pack a punch as mighty as anything branded metal in the year 2000 – and, setting them aside from rudimentary fare, both swaggered with funky allure just as much as they strode with acerbic intent. That’s an important ingredient in this album’s lasting appeal: cut through the at-time impenetrable lyricism (more on that, in a moment), and this is actually a record that can be grooved to. Its makers famously berated those at their shows who preferred to slam than dance, and they might have had a point: it’s loud, and fast, and heavy, but this isn’t a set for throwing blows to. It’s a lingering, lascivious kiss; it shoots smiles of the variety you’d never need a blade for.

At its heart are songs that go far beyond punk, beyond hardcore – ‘Non-Zero Possibility’ and ‘Enfilade’ go some way to projecting forwards to a Mars Volta future for two-fifths of this outfit. Elsewhere, the six-minutes of ‘Invalid Litter Dept’ (remarkably released as a single) tackle the weighty subjects of murder and rape – hardly the sort of themes made for mass-market consumption. But, again, Nirvana did the same: ‘Polly’, sitting at the very centre of Nevermind, was inspired by the abduction and rape of a 14-year-old. And both albums place the breakthrough hit at the top of the order, relatively – ‘Smells Like Teen Spirit’, the one Nevermind track penned by all three members, opening the set, and ‘One-Armed Scissor’ coming in at three. It might not have set MTV aflame, but At The Drive-In’s biggest-selling single was remarkable in that it charted at all, the band’s only single to do so. As for what a ‘One-Armed Scissor’ was… Well, Wikipedia has since offered an explanation, but at the time one could rock out to the cut in a club, hollering the words, just as mindlessly as they could the twisted refrain of: “A mulatto / An albino / A mosquito / My libido”.

Critics of Relationship Of Command – and I have seen several on the DiS boards in my time – frequently cite the album’s perceived lyrical smugness, its self-indulgent forays into the thesaurus to benefit its rhyme schemes (or utterly ignore them), as a reason to mark it down. Sure, it’s got instrumental clout – but what the hell is the big-haired fellow on about, exactly? Well, I say: to have no interest in the written, spoken or shouted word is to have no interest in art whatsoever – after all, to paraphrase Frederick Barnard, does a perfect picture not paint a thousand words? And if that were the case with infallible consistency, surely the wordplay of Cedric Bixler (at the time, just Cedric Bixler) is capable of summoning myriad magnificent images to the mind’s eye: some shocking, some stunning, but everything so real one could almost reach out and touch the oil. As he exchanges lines with Iggy Pop on ‘Rolodex Propaganda’, are we not moved to their side, tasting their sweat and smelling their stink? Just me? Guess you weren’t there, man.

Because you did have to be there, to see them, while they lasted. I did, but if you missed out – the band broke up in March 2001 – then you’re short one valuable connection with these songs: the indelible moving images of Bixler spiralling about a stage like the next night doesn’t matter a damn. That Later with Jools Holland performance? But the tip of an almighty iceberg of unforgettable shows – but at least their appearance on the BBC music strand guarantees that newcomers are but a YouTube search away from witnessing something special. Completely fucked up, of course – again, a Nirvana parallel appears, with their Top of the Pops take on ‘Smells Like Teen Spirit’ – but special certainly, and there for posterity (or at least until the Internet dies). Relationship Of Command was, in the band’s own opinion, the set that came closest to capturing their live energy. With Ross Robinson on production duties, they committed themselves to going further in the studio than they’d ever dared. The results inarguably scream for themselves; but it’s the on-the-edge quality of every constituent battling every other one that perhaps signposts the band’s inevitable collapse. Like I said, 20-20 hindsight and all that.

Oh, and guess who mixed Relationship Of Command? The very same Andy Wallace who filled the same position on Nevermind. Just like Nirvana’s massive-selling mega-hit, this set shines with the sort of finishing touch perfection that ensures its volatile innards never spill fully from a brittle body that’s so desperately trying to keep them in check. See: it’s truly the Nevermind for the kids whose elders embraced the flower sniffin’, kitty pettin’, baby kissin’ corporate rock whores (because, really, their selling out was nothing of the sort – they bought in). The kids who had a new rank of rockers to refuse in exchange for something more, something with a soul and without a ‘nu’ prefix – same shit, shorter hair. The kids who, today, feel a rush whenever the drums of ‘Arc Arsenal’ start rolling, only to stop – and then the whole thing explodes into brilliant, everlasting life.

Which, unlike Nevermind, might just come alive on a stage again in the future. One sits, waits, and wishes. Hard. Because, as At The Drive-In made clear an album before Relationship Of Command: “This is forever.”