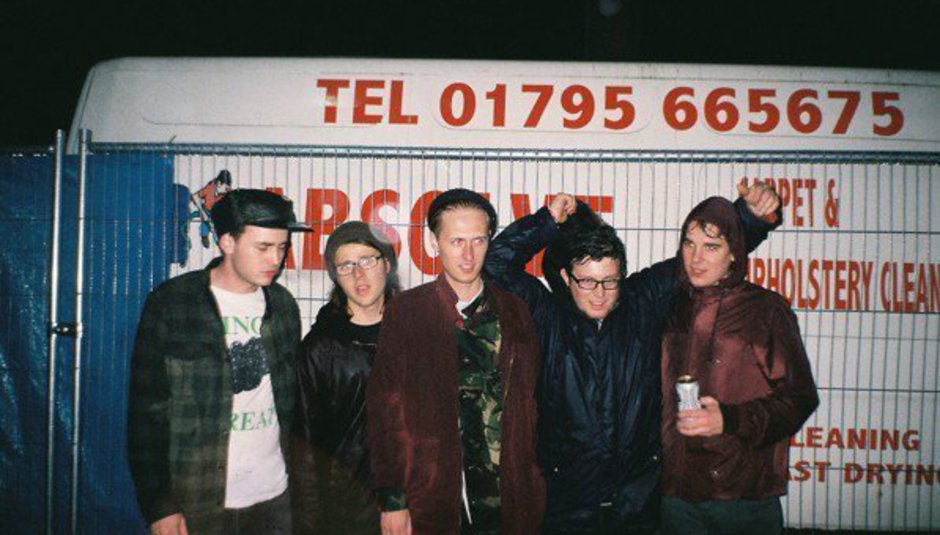 Leeds based five-piece Eagulls are a welcome breath of fresh air amongst a sea of career bands currently occupying the airwaves. Unpretentious and genuinely unassuming, their chaotic brand of grass roots punk rock coupled with a lo-fi sensibility makes for a refreshing, if occasionally shambolic change from the studied cool exhibited by many of their peers and contemporaries.

Although still in the infant stages as a band; Eagulls first came to our attention at last year's In The City having barely reached double figures show wise at that point; and having put out the excellent 'Council Flat Blues'/'Acrostycal' seven-inch on Moshi Moshi earlier this year, their profile has risen somewhat in the interim period.

Now, with a split single just released with fellow lo-fi slackers Mazes, the five-piece have just embarked on their biggest UK tour to date in support of Jack Cooper and co's outfit. DiS caught up with the Eagulls collective - vocalist George Mitchell, guitarists Mark "Goldy" Goldsworthy and Liam Matthews, bass player Tom Kelly and drummer Henry Ruddell - prior to their recent show at Nottingham's Spanky Van Dykes. No sleep 'til soundcheck...

DiS: When did the band first get together?

Mark Goldsworthy: We started in April last year. Me and Henry (Ruddell, drums) already knew each other from playing in other bands, and then we gradually met everyone else and Eagulls just came together.
George Mitchell: Sort of a last resort!

DiS: Who writes the songs?

MG: Me and Liam (Matthews, guitar) tend to write the music, then we just all get together and work around it.

DiS: Things have moved quite rapidly for you in the 18 months you've been together, from playing In The City to releasing your first record and now spending the best part of October on tour. Did you have any kind of timescale or expectations of what you wanted to achieve?

GM: No, we didn't really set out to achieve anything other than play a couple of gigs and see what happened. I wanted to do something other than sit at home drawing, and I knew Henry from back home (Ripley, Derbyshire) so I came to Leeds originally just to go skateboarding with him and met these lot, and they'd just started a band, so I thought "Fuck it, I'll join the band!" and then that was it. We played a couple of gigs and the next thing we were supporting Jamie T!
Liam Matthews: After that I thought we were going to make shitloads of money by next week! You know, first we're suporting Jamie T, what's next?!?

DiS: You've been likened to numerous artists depending on which publication or review you read from the likes of Dinosaur Jr and No Age to people like The Cribs and Oasis. Who would you compare yourselves to?

GM: I saw that review comparing us to Oasis where they accused us of making "lads music" and being a ladrock band!
LM: People who think we're anything like that really need to get out more. We're totally against that type of thing and musically probably as far away from that as it's possible to get.
GM: It's almost as though anyone that doesn't stand there all po-faced staring at their feet must be ladrock. We drink, we like to have a party, we don't stand still on stage. So what?

DiS: It does seem quite a ludicrous comparison. I somehow couldn't imagine The Twang or The Enemy having a Wipers cover in their set for example.

GM: Well that's what I mean. Some of the people that are paid to write reviews are idiots. They really don't have a fucking clue.
Henry Ruddell: It's like, we get accused of being football lads as well and you think, have you ever seen us play or even met any of us?
GM: None of us even like football.

DiS: Do you think being based in Leeds has been advantageous in accelerating the band's progress? There is quite a scene there and has been for some time, although a few bands I've spoken to recently have said it can also be quite cliquey and insular.

LM: I guess that's the same with any city really, though isn't it?
MG: Leeds has been good to us. There's so many new bands coming through from the city that it does feel like you're part of a community. I mean, we're not necessarily all in it together as far as the music goes but there's enough great venues and excellent promoters to go round, which has suited us so far.

DiS: Are there any other new bands you think we should be focusing on at present?

GM: There's this ace band in Leeds at the minute called Hookworms. And also Idea Shower too, which is basically members of Hookworms and Spectrals playing more garage-influenced punk together.

DiS: A lot of people seem to be writing obituaries about the demise of guitar music, yet outside the bubble of daytime Radio 1 there's a whole load of bands crating excellent guitar-based songs. What's your take on it?

GM: There are only so many fucking instruments in this world, and the guitar's the one that everyone will always use.
MG: And then they'll try and convince you that making music on your laptop is the way forward, you know, checking Twitter while you're playing!

DiS: What's been the most exciting thing about being in Eagulls so far?

HR: We recently played a show in Paris, and that was pretty mental. I think just playing live in general to be honest, especially when it's to audiences in towns or cities we've never been to before and they're singing the words to our songs back at us.
MG: Playing live and taking time away from the day job!

DiS: Have you all still got day jobs?

MG: Yes, that's why organising tours have been difficult so far, because we all have to try and synchronise our annual leave for the same time, and when you've five people working in five different places it can be a nightmare!
Tom Kelly: The flipside of that though is that we have to earn money to pay for recordings and rent and things like that, so it's a bit of a catch 22 situation in that respect.
GM: I wouldn't moan about it because everyone has to work, and the only option for us would be to live off our parents which is something none of us would ever dream of doing.

DiS: Have you ever had to turn down any gigs as a result?

MG: We've turned down gigs that we don't want to do but never not turned up to something that we've booked.
HR: There's been times where we've played a show, drove back in the early hours of the morning, got changed and gone to work, then gone home after and got changed again to play another gig, but I guess it's something we've got used to.
TK: We've done quite well so far but now we're coming to the end of the year people's annual leave is starting to run out so...?

DiS: Your debut single 'Council Flat Blues' came out on Moshi Moshi and you're about to release a split single on the Italian Beach Babes label at the end of the month. Have you got anything else lined up for the foreseeable future and has there been much interest from labels?

TK: Aside from the two tracks on the Italian Beach Babes seven-inch there's nothing in the pipeline yet.
MG: We've sort of had whispers from a few labels but nothing concrete so far, and to be honest I'm happy writing new songs and playing live at the minute. I think that's more important for a band at our stage rather than getting bogged down and put under pressure by a label. We've only just got ourselves a booking agent for live show and we aren't signed to a PR for press yet so I'd say it's probably too early to worry about being signed.
GM: I think we're a perfect example to anyone that if you've got good songs and put on an exciting live show your music will get out there. A lot also depends on having someone to push it and fortunately we've got an excellent manager who's worked his socks off on our behalf so far.
TK: If we didn't have someone pushing it out for us a lot of people wouldn't hear it.
GM: There's some people out there I wouldn't particularly want to hear it!

DiS: So is there a plan to put together an album in the near future?

MG: No, not really. We're still busy writing singles. I think that's why we've grabbed people's attention because they're all quite catchy songs come to think of it. We write from that kind of perspective in that every song could be a single. We don't want to be seen as a band just having a couple of killer songs and a load of filler.
LM: The positive thing about getting signed would be the extra time and money it would bring. We'd be able to afford to take more time off work to write and record songs without worrying where the next rent cheque is coming from for starters.

DiS: So if the opportunity came along would you give up your day jobs tomorrow?

ALL: Of course!
LM: This is where we have a problem playing shows outside of the UK. At this moment in time we wouldn't be able to tour round Europe because there's no way we'd all get enough time off.

MG: We haven't really thought that far ahead to be honest. There's still a few things left for this year.
GM: We've got some shows with Fucked Up, Iceage and Hot Snakes coming up, and then we're also playing the Constellations Festival in Leeds next month.

DiS: Finally, has anyone ever confused Eagulls with being an Eagles tribute band?

HR: We said we'd call ourselves the Illegal Eagles but then we found out there was already an Eagles tribute band with that name.
LM: Maybe we should have just put an 'S' on the front?
HR: The Illegal Seagles.

You can catch Eagulls at the following live dates:

For more music and information on Eagulls visit their Soundcloud page.