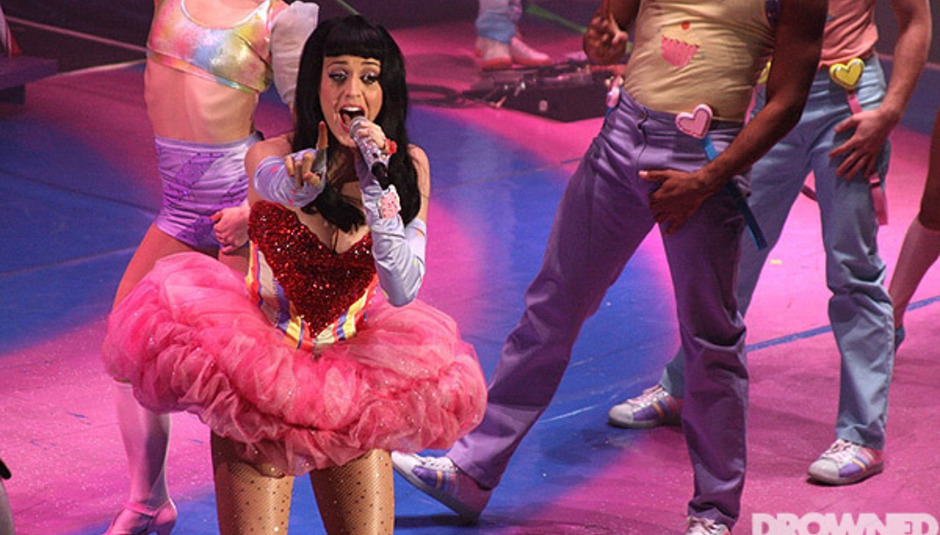 It’s a rare occasion when Drowned In Sound is invited inside the cavernous bowels of the O2 Arena, not least to witness a proper A-list popstar like Katy Perry. The last time we were able to chow down a burger in the same venue as the act we were reviewing was at ATP in Minehead and, with the best will in the world to Barry Hogan’s brainchild, the O2 does a better line in grilled beef sandwiches.

Once we’d gotten over the enormous array of chain restaurants and confectionery-themed fancy dress surrounding us, it was just about time for Denmark’s Oh Land to warm up the crowd. Adorned in a strikingly naff poncho and opening with her strongest salvo possible of ‘Perfection’ and ‘Son Of A Gun’, both these cool electronic gems fell waste to the thankless task of pleasing a hoard only interested in cheering when their lipstick lesbian idol was mentioned.

Touring DJ Skeet Skeet duly cashed in on this phenomenon by namedropping Perry during every pause in his half hour set of garish electro-house remixes. As hellish as this was, we now know what the Oceana experience would be like when shared with 15,000 fellow ‘clubbers’, a solid 10 per cent of who were no stranger to the menopause.

For those wondering how the ‘Hot N Cold’ singer managed to transition herself from the Monto Water Rats to London’s biggest venue in little over three years, then you can send your thank you letters to the Artist Management department at EMI. These sales-obsessed geniuses have managed to string out the arse end of Teenage Dream’s singles run so that Perry is now one US chart topper away from achieving the record for Number One singles from the same album. She currently shares the accolade with Michael Jackson, who may well be cursing his aversion to hip-hop guest slots from beyond the grave if Bad is trumped by a sexed-up girl next door.

As you’d expect for a production engineered to please countless thousands, the California Dreams tour was something of an extravagant affair. From a stage adorned with candy cane to the constant stream of adoring tweets splashed over the O2’s TV screens, the scene was set for a whimsical journey through the greatest hits of a Capital FM mainstay.

While Perry lacks the pipes (and moves) of Beyonce or the batshit crazy of Britney, her songs hold the rare quality of being universally likeable whether you’re an excitable pre-pubescent or a middle-aged gay man. Both groups were out in full force and lapped up the opening anthemics and easy singalongs of ‘Teenage Dream’, ‘Hummingbird Heartbeat’ and ‘Waking Up In Vegas’. It was a grand introduction to the show and one which seemed like a distant memory once a crawling mid-set slump had kicked in.

Despite pulling every trick in the crowd-pleasing book, from a cod cockney accent to an acoustic rendition of ‘Thinking Of You’ performed in the middle of an arena on a candyfloss cloud, it was hard to shake the feeling of ‘oh that’s quite nice I suppose’. Things picked up a bit in the amusement stakes when Perry challenged her male audience members to take their tops off in as shorter time as possible for the chance to come up onstage. Our t-shirt stayed firmly attached to our wirey chest but that didn’t stop several blokes falling over themselves to expose their thundering beer bellies to the world in this flagrant prelude to ‘I Kissed A Girl’.

With all her big guns saved for a stellar finale, Perry dutifully slammed home the open goal her fans had been waiting for. The high school drama of ‘Last Friday Night’ was accompanied by an endearingly cheesy montage of drunken normal people photos. This was quickly followed by a gleeful cover of Whitney Houston’s ‘I Wanna Dance With Somebody’ and, just in case your feelgood factor wasn’t already set to ‘full-on gurning’, ‘Fireworks’ brought the house down with an obligatory pyrotechnics bonanza.

As Perry came back for an encore of ‘California Gurls’, ensuring almost everyone went home happy, you’d be hard-pressed to state how she could have done a better job with only two LPs of hummable but patchy material to her name.

Unlike Lady Gaga or Rihanna, who are sometimes hamstrung by whatever caricature they’re adopting for their current promo cycle, this former Gospel-rock singer is in the rare position of selling records based on her slightly kooky but otherwise normal persona. It’s this very ordinariness that has allowed Perry to headline the London’s biggest enormodome, twice, and has placed herself on an equal footing with the King of Pop.

Will she still be there two decades on from now? Maybe not, but for now her Golden State smile is looking pretty irresistible.

Photo by Katy B

My Brightest Diamond on her Detroit G...