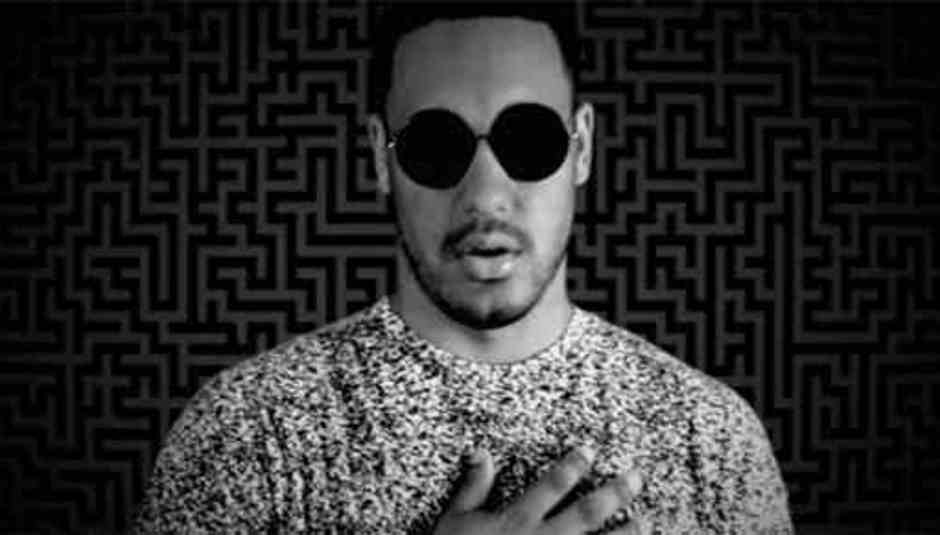 This morning’s crisp sunshine can only mean one thing; it is Autumn, which is the season in which everyone in music releases a single at the same time, in a vain attempt to get their hands on your money before Father Christmas comes around to suck it all up with his elephantine, capillary-busted hooter.

The more you start to think of Christmas as a leathery vacuum after which you have literally no money, the better it is.

Occasionally you hear things in polite society that are so wrong-headed, you lack the wherewithal to respond. Music is no different; ‘It’s all been done already’, ‘There’s no good music at the moment’ and ‘No one writes political music anymore’ being just three that can provoke a person to bring their handbag to their face, in order to use it as a nosebag for snorting into. But it is the last of these that ‘Capsize’ hits, effortlessly, out the park, what with it being about NOW and VER TORIES and CUTS, and how it might be quite a good idea for ‘us’ to ‘stick together’ if we want anything to change. The brilliant thing is that a) it's political in a non-Levellers way, and that b) it's still a brilliant pop song; a floor magnet and yes, a banger. 'Capsize' rattles with percussive ideas and judders with what sound like the very cranks and cogs of The Machine - shifting and re-writing those little snippets of legalese that only start to matter to you personally when you try to return a library book, only to find it entirely staffed by W.I. ladies; jam on everything. Or find your examinations have been sponsored by Amstrad. Still, free calculators! If you save enough democracy tokens! (They’re not for you, peasants.)

*N.B. The (as ever) beautifully clean, geometric and elegantly designed video above does not include Mr. Manuva’s intro as per the album version. Do look it up.

‘Female singer-songwriter’ is one of those phrases which was not worn by repetition, what with it meaning precisely nothing in the first place. That doesn’t stop it falling from the mouths of the sort of knuckleheads who collect Wimminz Music as if it were a genre all its own; or as if a piece of music’s innate worth were tied to how earnestly its tits had been tweaked. Being not quite sure what any of this has to do with Liz Green - except to say that she would be damned by any of the above epithets, and doubtless has better things to do than shoehorn masturbatory metaphors into single reviews – let us hone in on that voice, Green being possessed of a sound that jaunts along with more character than a thousand Mexican soap operas; knowing, calm and foggy. ‘Displacement Song’ has a plotzed brass section that has been at the optics all evening and reads like a warning speech before the baddies burst in. So when she asks you not to ‘look to me to carry your weight, for they’re on their way’ you know the speakeasy doors aren’t long for smashing. Just as easily as you can imagine her rolling her eyes when the wood splinters.

I don’t like how ‘Chair’ starts, it has one of those needlessly breathy, solemn intros that rarely convince, like deliberately ripped denims. I start to like it a lot more when they break out the fuzz, giving the plaintive whining something to jut up against, putting it into sharp relief. This is a slight but amiable single about someone who is only going out with Big Chair so that they write songs about them. We’ve all done it.

Historically I have hitherto found it more entertaining to make jokes about Bon Iver than to actually, you know, listen to him. Partly because I have always found Wilderness or Mountain Men simultaneously as irritating as they are amusing [in my woman-mind they are filed alongside ‘Arctic Explorers’ and ‘Decathletes’ – as in, men too achievement-oriented to pay my needy face the requisite attention]. It was Maggoty Lamb who skewered him best for me, with his alternative title of ‘Boo Hoo My Girlfriend Left Me’ sticking up like a peak – but I would be lying if I did not admit there were lots, oh lots, of other cads; quips stuffed up their jumpers and stuck to the bottom of their plimsoles, ready with a ‘shacky’ or a ‘bare-floor-boardy’ when I felt like music was inherently skewed toward the veneration of Bearded Men Who Mean It. Now I am a grown up and beyond such textual trinkets, I listened to ‘Holocene’. And it’s nice, ‘a bit’ transportive, and if you twist my arm, sort of beautiful. But that's not to say that if you get me ratfinked, pull me into a water closet and proffer a ‘cabiny’ from your linty pockets, I will not still snicker.

Bearsuit are from Norwich. And because I now live there it is incumbent upon on absolutely everyone I encounter outside the county - no matter how flimsy their knowledge of indie – to go ‘Norwich? Bearsuit!’ as if it might be Narfuck Law to like them. As I am allergic to scenes given that the enrolment in same inevitably requires one to encounter scenesters; and given that any scene based solely on geographical location is nebulous at best, let it be known that a) I don’t want to know where any band comes from and b) I don’t normally enjoy yelpy art-indie of the sort Bearsuit deal in and c) I like ‘Princess, You’re A Test’, quite a very lot. I found myself singing the ‘testtesttesttest’ of the chorus about the house quite unprompted, I like its bass rumbles, I like how every instrument is not so much being played, as bashed with spanners. It is almost as if I had eaten too much Colemans. Which you should know (massive contradictory witch that I am) is easily the best mustard, and effing delicious on everything.

I can’t tell you how offensive I find TEETH’s fluoro hobo artwork. Thinking it is alright to use the the visual currency of hipsterish hypercolour, over a photograph of someone so spectacularly dislocated from society that they spend their days drenched in alcohol - presumably to stop them remembering they have to use cardboard for a pillow – seems to smack of a peculiar dislocation from your fellow men. Some vile circuity right there, even if the whole ‘nothing is off limits’ aspect to modern life (and, especially, FASHERN) makes my blood boil. So I hope if we do ever morph into highly attuned, streamlined and sophisticated superbeings we look back and see this sort of marketing for the repellent tripe it is. If, on the other hand, the photo turns out to be staged, I’d quite like to know what the point is, and not in a small piece of white foam card beside the artwork sort of way.

‘Liiines’ takes a rather unforgiveably long time to get going, but once it gets on its lumbering way the lolloping drums and piano prods do what they’re meant to; providing an amiably portentous framework for Ghostpoet to get all ack over. It’s all quite emo and I’m not sure the drama is entirely convincing; a bit like watching a Crash, when you need a Magnolia. Bloo hoo.

Body Language’s marvellous ‘You Can’ (on which, more here) was backed by ‘Social Studies’ when released by the (faultless) Double Denim earlier this year. But here it is again, with some added re-swizzles and tartings-up.

The above (slightly different recording to the single version) should give you the idea – Squarehead are going to start their song in the Spectorish fashion, and there will be ‘baby, baby, baby’s in lieu of lyrics, and handclaps, and it will be the song-as-anguished-60s-beat-group-wail. In the modern musical landscape, Squarehead are hardly alone in resurrecting these tropes. That they do so and still make you want to clap along, is admirable.

Along with Skrillex this was quite easily the most abrasive thing in this week’s pile, but as I listened to it blind I had no idea who it were. Certainly there is a certain truculence to DJ Shadow now, even his press releases are written in a coy and jolly ‘Like it or rack off’ fashion that seems to indicate he knows there are those who think his time has passed. All of which makes it doubly delightful when Afrikan Boy pops up, his general élan and shouty exuberance doing a grand job of making you (almost) forget the horrors of the ‘I’m EXCITED!’ shout-outs. There are some ripped beats and tinny, hollow percussion on this which are pretty rare and larks. But at the same time, it is so garishly composed it is almost as if Mr. Shadow were trying to wriggle out of a contract.

As ever, the thing that Peggy Sue seem to do better than most is in arranging the vocal lines in such a way that they slightly jar, adding an intricacy which you would miss if they took a plainer or simpler route. Some smart poesy in the lyrics, anawl.

Okkervil River - ‘Your Past Life As A Blast’ (JagJaguwar)

‘Your Past Life As A Blast’ is alright in its echoey way, a dispossessed sea shanty that does not so much drive along as roll. Muffled and warm, the only sticking point is that it reminds me of something else so hard I feel like I am being prodded. If you can work out what it is, I should be very grateful.

I’m still finding it hard to get properly excited about Austra, but time spent listening to ‘Spellwork’ is hardly spaffery, what with it having heaps of atmoss and a delicately doomy electronic framework. In the general scheme of modern melodramatic song it is more bauble than Faberge egg, but it’s a very nice bauble all the same. Maybe the sort you buy individually at perishing cost, from Selfridges ground floor.


Wendy is on Twitter, here. Don’t think she hasn’t had at least one imaginary argument with an Arctic Explorer husband; babe on her jutted hip, hair in rollers, all ‘Ranulph! What about my sodding kitchen!’.