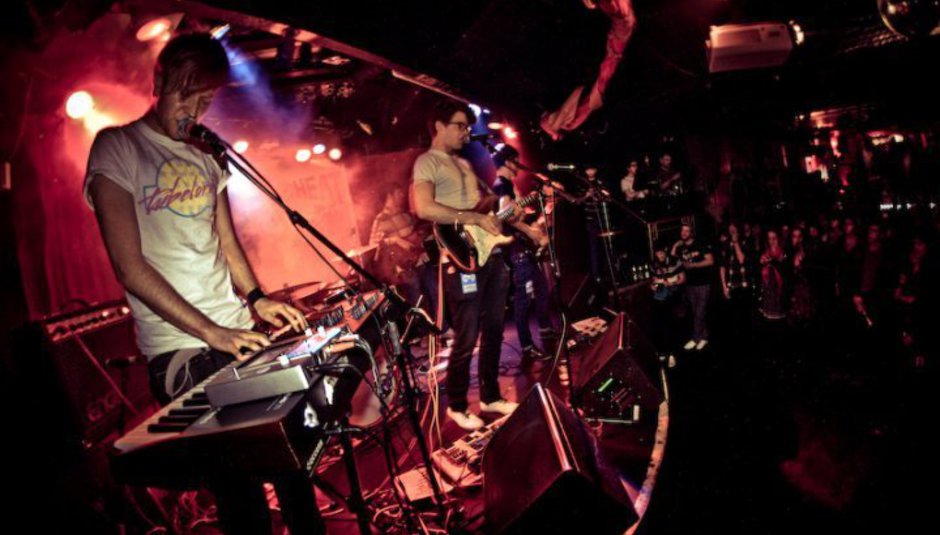 It's a cliché to say, but Summer invariably gets a bit quiet around Manchester as the students bugger off, the festival seasons kick in and the beer gardens gain an irresistible allure. Except Manchester doesn’t seem to have many of the latter, so where were you all!?

With That Knife – 'Cold Blooded'

The exclusive DiS Manc download this time out comes from a band who’ve had something of a quiet summer since a busy first few months of 2011 that saw them supporting Napoleon IIIrd, Trophy Wife and Johnny Foreigner respectively - as well as putting on a stellar show during May’s Sounds From The Other City Festival. ‘Cold Blooded’ however is a firm return from the periphery, picking up where last year’s debut single ‘This Place, A Thousand Times’ (featured here) left off in emerging from the discordant melee of math and punk influences that marked their early demos to appear hewn-down, slick and dazzling in a new pop-orientated direction. That said, the clever bastards still manage to log hooks into the cerebrum without settling on anything so mundane as conventional song structure, splitting ‘Cold Blooded’ into first a swaggering verse and chorus and then filliping into a tumbling repeated coda that snowballs with momentum before stopping contrastingly abruptly compared to when it crept into view.

With That Knife - Cold Blooded by DrownedInMcr

The five-piece are set to confirm a handful of Autumn dates in the next few weeks; first date confirmed however is in support of Young Legionnaire at The Ruby Lounge on October 6th.

Drowned In Sound Returns To Manchester You might’ve seen us announce this a couple of weeks ago, but we do love to blow our own trumpet. Drowned In Sound are back in Manchester for the first time since In The City last year, bringing what we hope will turn into a regular series of club nights showcasing the best of up and coming artists from both the city and further abroad. First up on September 23rd we’ve brash synth-punk trio TEETH playing off the Northern Quarter’s beaten track in Kraak Gallery, more than ably supported by new Mancunian residents (welcome to the North West chaps) Ghosting Season whose dancefloor-driven euphoric electronica is gathering ever more plaudits, while local – and oft mentioned round these parts – glitch trip-hop three-piece From The Kites Of San Quentin are also getting involved.

Tickets can be bought for £6/£5 NUS at Skiddle.com, and they’re going rather well – so get a shift on ey!

Fat Out Till You Pass Out

Currently on a prolific booking spree of the noisiest sounds around from these climbs and beyond, Salford-based promoters Fat Out Till You Pass look like they’re continuing what’s been an absolutely phenomenal year for them thus far. Putting on gigs in the area since 2007, Fat Out – trio, Dave McLean, Emma Verity and Verity Gardner – followed a stellar line-up at Sounds From The Other City by playing host to the mighty Boris / Russian Circles double header. The first week of last month, meanwhile, saw them bring Fat Out Fest 2011 to the wonderful Islington Mill - a venue that seems ever more amiable with each visit, providing the sort of creative hub that nowhere else in Greater Manchester really has thanks to its enclosed courtyard, residential flats and practise rooms. With Mothlite and Action Beat headlining each night, the rest of the bill was taken up with the ferocious, the psychedelic and the plain mean (that’ll be Drunk In Hell – dirge punkers whose ear serrating riffs drove us to delirious distraction.) Manatees travelled down from Carlisle to remind everyone that their dabbling in the dark arts of heavy remains some of the most visceral in the land, Humanfly another flocking from Northern climbs - in this case Leeds - to snarl and spit over a thoroughly right-on and ready crowd.

Anyway, as mentioned, Fat Out are continuing their assault on our ears and this Autumn have so far announced five gigs of aural fortitude, kicking off with noise-punk trio Shield Your Eyes playing in the upstairs murk of Gullivers on September 13th, ably supported (not for the first time on these shores) by the relentlass sonic attack of French duo Pneu; further dates below. They've also just announced that the mighty Secret Chiefs 3 - band of former Mr Bungle guitarist/keyboardist Trey Spruance - and stalwarts of Liverpool avant-garde a.P.A.t.T have joined Finnish rockers Circle and local proggers Trojan Horse on October 20th.

Where’d we get to … oh, aye, Festivals; Festivals further afield naturally meant things got a bit quieter around here at a more grass roots level, even if Manchester International Festival became the focal point of many a musicman and woman when Bjork pitched up at Campfield Market Hall to reveal her mind-blowing Biophilia project over six sensational shows. The festival also wheeled out one of the more respected Madchester old skool in Dave Haslam to present a handful of shows showcasing the best “new” music, the highlight being Warp’s Lonelady popping her head up above the parapet for the only time this year to remind Egyptian Hip-Hop, D/R/U/G/S, Young British Artists et al that she was, in fact, streets ahead of any of them.

A couple of promoters bowed out over the summer too; the quietly excellent MIE Music returned to London after a series of shows including Tim Hecker, Oval and Grouper – he’ll be missed. As will Pull Yourself Together, a constant fixture amongst Manchester’s ever swelling indie-pop brigade, their regular nights at Common and occasional fanzine will be remembered fondly by most-all who attended, their release of fast ascending local dream-poppers Patterns’ debut EP also likely to keep them in the memory for some considerable time.

Down in Withington meanwhile, Manchester Scenewipe & Bad Uncle, among others, made the tiny upstairs of Fuel Café a surprisingly regular haunt for many, the former will more than likely have announced a complete new site re-launch by the time this goes to publication, so keep an eye out on www.manchesterscenewipe.co.uk for that. The latter, meanwhile, saw fit to coax the skittering math-rock of Burnst out from hiatus – members of the group have since gone on to form Plank! and NASDAQ among others – to smudge their sound all over the vegetarian café. A DJ around the Northern Quarter for the best part of a decade, Danny Drive Thru’s physical output is remarkably thin on the ground for someone so a part of the city’s club scene. This 7” for the Mind On Fire label sees the producer move towards the lighter end of a spectrum that takes in everything from drum n’ bass and jungle to hip-hop live. ‘Psychedelia Smith’ sees crisp beats tainted and brushed with crackles and smears, imbuing a dusky sense of stoned out ethereality, with B-side ‘Violence Makes’ mellowing further underneath a disarmingly detached vocal sample. A multi-faceted piece of vinyl, 'Psychedelia Smith' does a lot of reflect the patchwork of different sounds currently making up Manchester’s electronic scene. Initially seeming like more of the sort of garage lo-fi patter that’s made a really quite rambunctious breakthrough within the city, Ghost Outfit have set about their summer knocking back a lot of those pre-conceptions with a series of tracks and accompanying films released for free on their website. The audio makes up Young Ghosts EP and, like local pals Patterns are currently doing within electronic dream-pop, the duo are taking a contemporary well-worn genre and seeking to transcend it by the simple yet oft-forgotten means of actually sounding like they give a shit. Not everything on these 13 tracks matches up to the “best band in the city” tag that the local press are giving them at the moment, but it’s hard not to be impressed by how far they’ve come on. Improvement arrives most notably on the second half where they fight through the catchy fuzz-pop assaults to reach a point of tranquillity, providing some moments of real poignancy, including ‘Boy’s bobbing melodies and the warm wash of ‘I Was Lost.’

I Was Lost from Ghost Outfit on Vimeo.

Until October! Recommendations and that sort of thing can be hurled forthwith to @essjaycats, or comment below if you’ve anything about Manchester that you feel needs to be discussed post-haste. Go!

In Photos: The Horrors @ Reading Fest...

In Photos: Alex Winston @ Shepherds B...