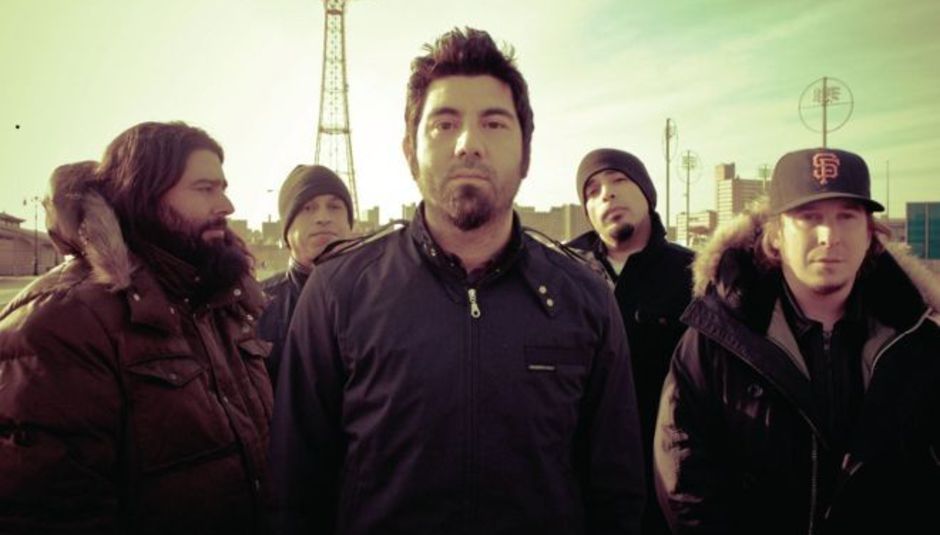 Ahead of their sold-out headline show at London’s Shepherd’s Bush Empire, DiS meets Deftones’ Frank Delgado (electronics) and Sergio Vega (bass). Each joined the band at pivotal moments since their 1988 inception – Delgado, who pops a fresh beer as soon as we sit down, when the Californian band took an experimental direction for 2000’s highly regarded White Pony album; and Vega when it was apparent original bassist Chi Cheng would not recover from a 2008 car accident to rejoin the band. They’re both in good spirits as their band brings the curtain down on their excellent sixth LP, Diamond Eyes, released in May 2010 to great acclaim. As drummer Abe Cunningham bounces between dressing rooms, a grin fixed on his face – he’s clearly looking forward to tonight’s show – we take five to discuss the pair’s contributions to Deftones as we know them today.

Well, Coors Light is a good way in, I suppose, since it tastes of nothing.
F: I know, I know, it tastes of piss. Would you like one?

No, no. Thanks though. I thought, since you two gentlemen have joined me, I’d ask about the times when you each joined the band – as both were very important stages for the development and progress of Deftones. Frank, I know you were involved with the band before, but you became a ‘full’ member when the band was putting together the White Pony record, right?
F: Yeah, that’s right. And Sergio had played with them too, of course.

Yeah I know, when you were touring Around the Fur, I think?
S: Yeah, in 1999. When Chi couldn’t play. And then I came in again this time, because of what happened to him.

So do either of you remember getting ‘the call’ – that moment when you were in the band, for real?
F: I guess I sorta remember. But me and these guys go back a long way. I’d moved to Sacramento from LA as I’d followed a girl there; I met Chino (Moreno, vocals) within a couple of weeks of living there and we just hit it off. We started hanging out a lot, and he invited me down to their rehearsal space, after initially meeting me at a club I was DJing at. So I brought my gear down and we started jamming, essentially, with me playing around with soundscapes or making a bassline… So that’s how it started. Then they got their record deal, and invited me to be on a couple of songs on Around the Fur. I finished my parts and after that they said, “Quit your job and come on the road with us.” I talked it through with my girlfriend – my wife now – and she told me to go, and I haven’t looked back. We bonded, and we all wanted to make this really cool music. We played every shit-hole when touring Around the Fur, but we were laying a foundation. So when we started writing for White Pony, we all knew we wanted to try something different. We felt like there was a window for us to create something new – and I really wanted to be able to add something to the band without it coming off like a DJ scratching up a bunch of shit over a rock band.

And there were certainly a few of those around at the time. Naming no names, of course.
F: Right, and what they were doing, the music they were writing… it wasn’t for us. There was no room for us to fake it. For me, I had to figure out how, without being able to play an instrument, to stay in a song. So I played with Stephen’s (Carpenter, guitar) pedals, and I figured out how to sustain a note and pitch it, change it and play it. And this was before bands had access to the kind of technology they do now. So, on a song like ‘Change (In the House of Flies)’, I worked out how to be involved in it, using my shit – and as technology has improved I’ve been able to integrate myself more and more.

So come Diamond Eyes, I guess technology had reached a point where you could bring almost anything to the table?
F: Absolutely, and I could do it without breaking my back. I can have everything on my computer now. But I did a lot of sampling of Stephen, and then I’d twist it. I’ve been using Ableton since its inception, and it’s my thing. But back when we did White Pony, people were expecting us to go in certain direction – so we went in another one. We trusted our instincts, and we’ve always believed in ourselves. And we’ve been thankful for the openness in the group. On White Pony we had really aggressive songs and really soothing songs, and I think we’re gradually bringing the two together in a single song. We’re still learning, too.

So Sergio, when the band was making this transition, from Around the Fur to White Pony, were you looking on as a fan?
S: Well, that was around the time I was filling in. We met on the first Warped Tour, when I was playing in Quicksand. Somebody told me to check them out, so I did and they were awesome, and then I got to meet them and they were cool cats. Then in 1999 I filled in for Chi for a month, and what stood out was just how excited everyone was to be in this band. The shows were great, and everyone seemed so committed. It was really cool, being part of that. And then when I got the call this time… It was weird, because it was the first time I’d heard about what’d happened to Chi. So on that level, it sucked. It was very upsetting – but I also felt very honoured that they’d called me.

And was it important to you to not look to fill Chi’s shoes, but to bring something different to the table – to not be a ‘replacement’, but an extra member of the band?
S: Well, I think the first thing was to be a friend. This band has always been like that – friends first, I think.
F: We really didn’t know, after Chi’s accident, if we’d ever make another record. But we had this one show booked, and as it was getting closer we decided we were going to play it instead of cancelling it. So we got together and talked about what we were going to do, and I already knew who I wanted to call. And we all agreed. So Sergio came to see us, and we jammed, and it felt really good. We wrote a song and a half that night – ‘Royal’, on the record, was written that night.
S: And part of ‘Prince’, too.
F: So we realised: we can do more than just this show. We hadn’t spoken about the possibility of doing more before he showed up; but afterwards we knew he was amazing. He came over again, to practise for the show, and within a week of that we were in LA writing what became Diamond Eyes. It could have gone nowhere, but songs came every day. Two months later, it was all done. It was a good feeling, and we were in a new creative space. It produced a whole new ball of energy. And we’ve just kept going, since that day Sergio first showed up.

Was it a hard decision for you, Sergio, joining full time? As it means spending a lot of time away from friends and family with these guys…
S: Well, I’d done it before in previous bands, and with them – and I knew from touring with them before that they were great people. So in that respect it was a no-brainer. But I did have to sort it out at home. I was DJing at home, and playing a lot of parties, so in terms of work I didn’t have much to keep me there. But I did have to sort a few things with my family. The circumstances were such that the decision was very easy though – like I said, I did feel that it was an honour to be asked. And the situation was horrible, so of course I wanted to help. It’s always been that way – whatever these guys want, I’ll try to provide it.
F: We had no idea if he’d say yes. We knew what he was doing, as we’d go to see him DJing here and there. But we didn’t know if he’d want to get on the road again. Maybe he didn’t want to play bass, or even be in a band? So there were all kinds of questions around, but we all wanted him to join us. We hit it off so well back in 1999 – really, we had a blast. We were opening for Black Sabbath back then…

So, no pressure Sergio…
S: Ha ha, I had about a day and a half to learn the parts…
F: But he was a soldier. And we finished that tour.
S: I’d been in bands before, but I’d never come into someone else’s band like that. So learning someone else’s parts was a whole new thing. And playing those songs… For me, playing live is a joy. It’s awesome when everybody’s playing really well.

This feels like the end of the Diamond Eyes cycle – the album having come out back in May 2010. Given the problems the band faced, and the prospect of never even releasing another LP, its success must have smashed any expectations? F: Oh, as soon as we had that record done, I knew – we all knew – it was really good, and we couldn’t wait to unleash it. It just feels good doing this, you know? We’re taking chances, doing the stuff we like, and it translates. It might sound selfish, but we really do make the music that we like, over the music that people might have liked us for doing previously.

And why is it that people who picked up Adrenaline on day one, in 1995, still follow the band? It doesn’t happen for everyone. F: I think that a lot of people have grown up with us. They’ve had their first girlfriend, they’ve had a lot of the experiences we’re writing about, and maybe they’ve had a divorce or something. They find the song that suits them, that speaks to them about their own situation. Some people grow out of things – but once you get to a certain age and have experienced so much, you realise that all the music you have ever loved has a place in your life. And I think those that have followed us for so long, they recognise that we do take these chances. I think that’s the common denominator between our records. I think they dig us for that reason, and that’s cool.

Diamond Eyes is out now, and both Adrenaline and Around the Fur were reissued on vinyl earlier this year. The band’s official website is deftones.com. You can see 15mins of Deftones Reading 2011 set over on the BBC here and here's 'Back to School' from that show.