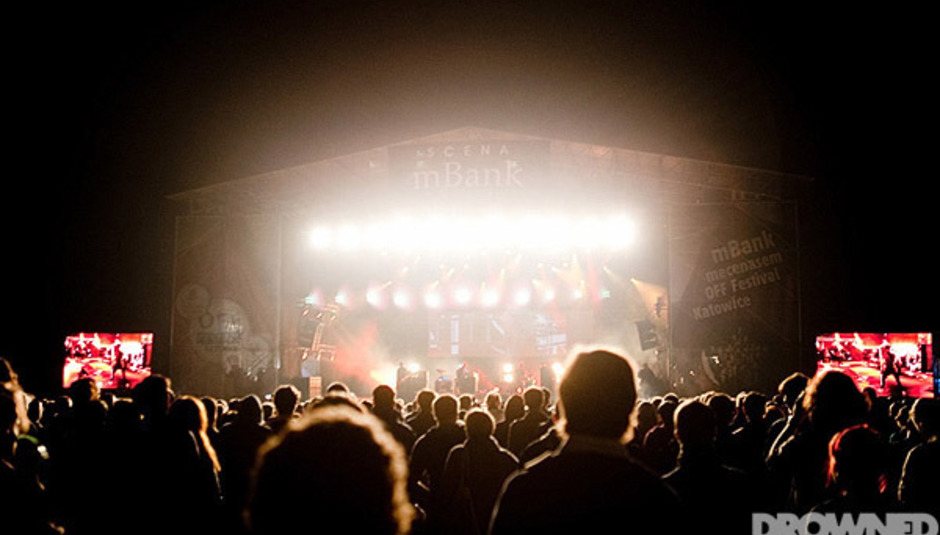 A review of a festival is always a slightly strange thing, because by its very nature it tends to focus on the quality of the line-up. But a lot of the time what it really needs to explore is the quality of the festival itself - how it differs from others, what makes it stand out, how well it's organised (admittedly a slightly drier proposition than writing two hundred excitable words about an excellent band).

Bearing that in mind, it's possible to make a case for Poland's OFF Festival as pretty unique. Yes, as mentioned in the preview, the sheer variety of music over the course of three days is unusual in itself - from straight-up dancefloor material (Kode9, Loefah) through synth-heavy experimentalism (Hype Williams, Emeralds) to the sort of bands you'd usually associate with ATP (Low, Ariel Pink, Oneida). But what's most impressive, upon arriving, is just how well the entire weekend is organised. You get the impression that even the scheduling is the result of some seriously careful thought: across four stages, only two bands are ever playing simultaneously, minimising clashes and avoiding acoustic interference. More impressively, it seems as though the organisers have taken great pains to avoid putting similar bands on at the same time, to make sure that fans of a certain type of music manage to see almost everything they'd be interested in (one obvious exception is the painful Deerhoof vs. Oneida showdown on Sunday evening, but then it's impossible to please everyone). Added to that £1.30-odd beers and far better food and drink options than last year - where 2010's menu consisted of several different types of sausage, and even sausages cunningly disguised within innocuous-looking potatoes, this year there's no shortage of veggie options.

OFF is also commendable for the amount of effort put into showcasing Polish bands, rather than simply providing a platform for the usual suspects to play in a different country. It's impressive to find several groups over the course of the weekend that rival their international relatives, and surprising that some of them don't have far greater profiles outside their home country. Paristetris, who play on Sunday, are a particularly good example. The Warsaw group don't quite look or sound like anyone else. The closest thing that springs to mind is probably Deerhoof, due to their incredibly tight playing and ability to turn on a sixpence, shifting time signature and tempo with seeming ease, as well as singer Candelaria Vallente's absurdist, cut-up lyrics. But they're far poppier in tone and texture, if not in compositional style - resplendent in a bright yellow superhero suit, Vallente's voice runs the gamut from folksy meow to histrionic bellow, drowned in salvoes of chart-friendly, almost trancey synth. It's a bizarre combination, to be sure, but it works, especially alongside anime-heavy live visuals. Even without the Manga and videogame clips projected onto the wall behind them, there's something very Japanese about their ability to simulate total, primary coloured sensory overload. Imagine Melt Banana's explosive hissy fits contained within fractured art-pop and you're somewhere nearby. Either way, it has an electrifying effect on a crowd hiding from an almighty thunderstorm outside the Experimental Tent. What DiS catches of *Mikrokolektyw on Saturday is equally impressive - the trumpet/percussion duo's take on jazz is diffuse and experimental, underpinned by dubby bass that seems to teeter around the drummer's loose rhythms without ever locking to them entirely. Thanks to some ropey planning, they're offstage ten minutes after we've arrived, leaving a huge cheer in their wake (especially considering the small size of the crowd).

They're immediately followed by a reformed Molr Drammaz (pronounced 'more drummers' - an apt name). The group's reputation in Poland is apparently fairly legendary, and their playing onstage together for the first time in years is met with genuine excitement, from both those who clearly know most of the tracks they're playing as well as from DiS. Based largely around percussion - as if the name wasn't obvious enough - rhythms from several drummers interlock and fall apart again, shifting in and out of phase while singer Asi Mina (who also played a set of orchestral pop earlier on the Main Stage) roams the stage. They're as good as any of the other music on this weekend - and with names like Oneida and Low cropping up elsewhere on the bill, that's a strong statement.

Elsewhere on the bill the international talent is just as impressive. Omar Souleyman's Friday night show in the Experimental Tent is, as ever, a manic, droning expanse of squashed techno beats and spiraling melody - but the reception is something to behold, compared to the usual reserved actions of a UK crowd. The entire tent is dancing manically after five minutes, an energy that refuses to let up the entire time he's onstage.

Low later that evening are, as usual, beautifully understated. What's always striking about their live performances is just how perfectly Alan Sparhawk and Mimi Parker's voices work in tandem - on a raft of material from The Great Destroyer (including an effervescent 'California') and new album C'Mon. Admittedly, the newer songs are less immediately anthemic, but that's compensated for in flawless delivery.

And a run of four impeccable performances closes the weekend. Oneida are, frankly, the finest rock band in the world right now. Opening with the amniotic drone of 'Horizon', from new album Absolute II, they proceed to lock into a frantic motorik groove and remain there for the entire hour they're onstage, buoyed by Kid Millions' drumming, as well as guest percussion from Liturgy's Greg Fox. The whole of Pre-Teen Weaponry gets dropped in, with typically Oneida-esque casual flair, and by the time they've finished the only frustration is that the show wasn't longer.

Ariel Pink can be patchy live, but he's on form this evening despite the hammering rain by the Second Stage, running through a set consisting largely of Before Today material and a suitably dramatic closer in 'For Kate, I Wait'. The kosmische drone and heady bass sucker punch of Emeralds and Hype Williams close the weekend in the manner of a slow comedown to painful reality, drawing attention to another of OFF's most appealing traits. Rather than following the usual festival dogma that later in the evening ought to involve faster, harder and more danceable music, the organisers plan each day to slowly wind to a close. The result, on Sunday night, is the oddly comforting sight of a couple of hundred damp and exhausted souls half-sitting, half-lying on the wooden floor, before drifting off into the night.