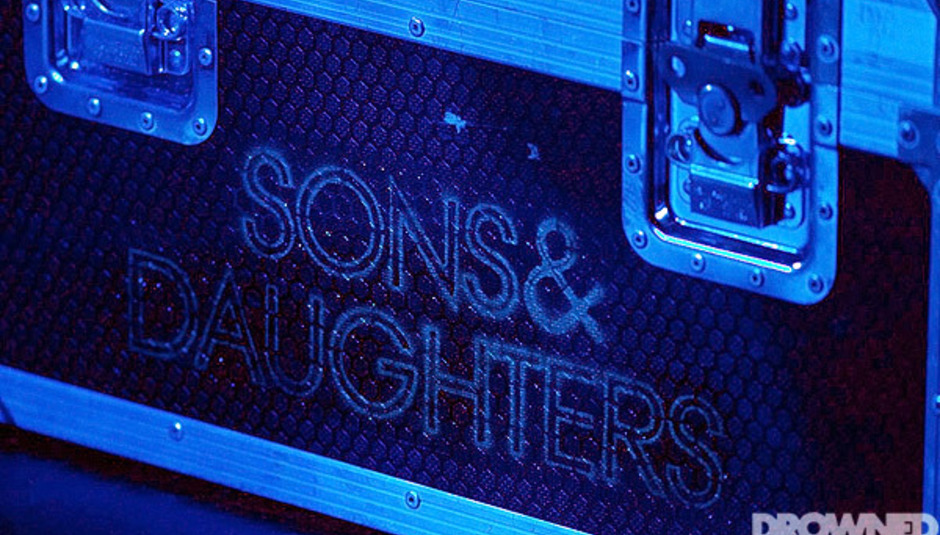 With a new album Mirror Mirror now in shops, David Gow, drummer with Sons and Daughters, chats about working with Bernard Butler and horror movies....

DiS: So let’s recap a little. I read that you considered This Gift as a failed experiment due to it not sounding like your own work. Do you feel 100% happy that you’ve rectified this problem in Mirror Mirror?

David Gow: “I wouldn’t call it a failed experiment as such. It was just an avenue that we didn’t go down previously. It’s an avenue that brought us to where we are now. It’s made me appreciate everything more. If we hadn’t made that album we wouldn’t have made Mirror Mirror, something that’s a lot more stripped down and darker. This Gift was kind of dark yet melodic and it had a lot of harmonies but there wasn’t a lot of space on it. We’re at our best when we’re minimal and when there’s space to create a bit of tension. “

How was it working with JD Twitch as opposed to Bernard Butler?

“We didn’t know Bernard that well but we knew Twitch quite well. Twitch spotted an importance in the band that was quite intrinsic. We’re dance orientated and we’re constantly in genesis so not everything is alike. I don’t see the point in creating what would be a This Gift 2 or The Repulsion Box 2.”

Would you say this has taught you to choose producers more warily next time?

“Kind of. We go with what we know. We do have a rule and that’s not to do the same thing twice.”

With such a refreshing song process, do you ever get “writers block”?

“Not so much writers block. It’s a certain level of thought. We have to be sure of everything we make which is why we had about 100 demos whilst making Mirror Mirror.”

Would you say this experience has made your identity stronger?

“We’ve always had a strong identity and there’s not that many bands out there where the balance of power is equal amongst women as with the men. Two guys and two girls make the band quite democratic and that’s what makes part of our identity. There are influences from many genres I think what it boils down to is the tunes and Scott and Adele’s voices. That’s what gives us our identity. We were formed during the post rock scene of 2000 and there was a heavy emphasis on that in Glasgow. We wanted to be more minimal and we took influence from bands like the Gun Club whose songs were short. Mirror Mirror took us a long time because we worked differently on it. This Gift had 15 guitar tracks on it and we wanted to get away from that.”

What was the idea behind implementing such non instruments as the type writer in 'Ink Free'?

“It was born out of fucking about in the studio really. Adele said wouldn’t it be fun to have a typewriter and we tried it out and it sounded good. Sonically it worked.”

The lyrical content in 'This Gift' was also quite a melodrama and now with Mirror Mirror, there’s quite an otherworldly feel with the images of witchcraft in them which Beth has described as a sexy evil. It’s an obvious transition from a physical plain to a more spiritual one. Was this deliberate and would you say it reflects how the band’s evolved?

“No one sat down and thought of the themes. We just spend months fucking about and Adele came up with those themes over the months as everything coalesced. We take everything at our own pace and only use things we really like. We don’t like rushing about.”

Is that the reason why you’ve stuck with Domino Records?
“Absolutely. No other record label would have let us do that.”

With the inspiration of Dario Argento as well, did you ever feel like you were making a movie whilst crafting the album?

“We’ve always been fans of his films, especially the horror genre. It’s really hard to decide what aspects run into our music. From Carpenter to the Texas Chainsaw Massacre, everyone’s quick to choose because these are all everyone’s favourite horror movies.”

Does the title choice match the themes of the album?

I can’t speak from Adele’s point of view but it’s to do with self-reflection and ‘Silver Spells’ is one of the more important tracks on the album reflecting this. It’s to do with reflecting upon one self and how our ideas change. She’s praising herself and the the band is doing and there’s no better song to do that than ‘Silver Spells’. It reflects us throwing away the guitars and replacing them with synthesisers. It’s a statement of intent.

Mirror Mirror is out now.

In Photos: Alex Winston @ The Bordeli...