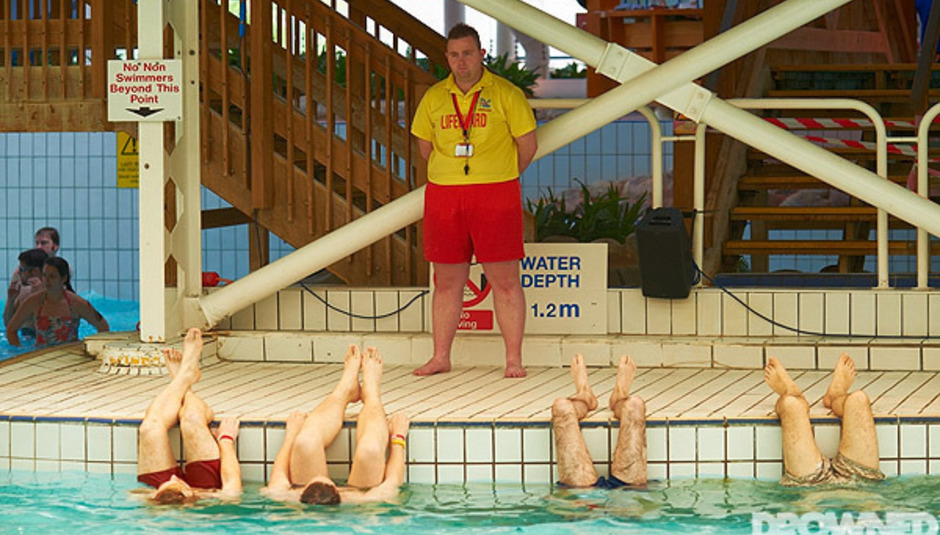 Let's not beat around the bush here - this is preeeeeety late. Er, yes, sorry about that, but hey ho - remember when there used to be ATPs in May? If not, here's a reminder!

The chalet Gods have smiled on us. Oh praise ye mighty overlords. Our apartment overlooks the main entrance to the site. Smugly we settle down in our prize spot.

I haven’t been to ATP for three years, and it does feel a little different, less people for a start, less crowded. It also feels strangely more like a festival, this time, little pockets of lads out to get wasted for a weekend, washing against the tide of skinny jeans and vintage dresses. Although maybe it’s just that the last one I went to was curated by the Dirty Three and was an altogether more civilised affair… none of this ‘dance music’ nonsense.

Dance music. We catch the end of Black Dice’s set. It’s broken rhythms trying to escape, being choked at birth. Now that the main venue is the Centre Stage and not the space under the big top, the ghostly, mouldy hall lends every act a sense of foreboding, not that Black Dice need it.

Grouper are, on record, one of my favourite bands. This is the third time I’ve seen Liz Harris play live, and each time it’s been frustratingly impenetrable. Her new double record this year, A I A, neatly captures the dichotomy in her music – 'Dream Loss' is all obtuse wall-of-noise-isms, while 'Alien Observer' is beautifully melodic, fragile to breaking point. Here we get 'Dream Loss’s soundscapes, and it doesn’t quite suit the mood. Hasn’t anyone told her this is a Dance Music Festival?

Big Boi is under no such illusions. Like his set earlier in the year at the Forum, it’s crammed with crowd pleasers. Joined on stage by just another MC and a DJ, it’s simplicity itself, just one hit after the other. It’s strangely refreshing to see a major artist so at ease with his own back-catalogue, ‘Ms Jackson’ and ‘Bombs Over Baghdad’ wheeled out like it ain’t no thang, while ‘Shine Blockas’ and ‘Shutterbug’ still sound like the best pop music of recent years. He looks like he’s enjoying it too, though hidden behind shades in an already opaque room it’s hard to tell exactly. ‘Hello Bristol!’, he yells to Minehead, and the crowd roar back… close enough.

Afterwards, Actress takes the stage downstairs at Reds. His music is like a memory of music, garage and house beats bubbling under the surface. But the set doesn’t feel like an evening-closer; it would work as a one off show, but coming after Big Boi, the mood’s not quite right – we’re here for dance music, not its memory. Maybe this isn’t a dance music festival after all. Maybe it’s one haunted by the ghost of grunge. After all here we are, watching the Meat Puppets, Cobain’s favourite band, playing Up On The Sun. These days that record sounds, through speakers, like some strange processor to Dirty Projectors’ harmonised guitars - miles of squabbling riffs and lunatic energy. On stage, weathered by 20 years of rock history, it sounds properly grizzled, and gloriously mad. Their set ends with a brutal, frenzied jam, noise bounding out of the PA like a train, a sort of peyote-infused-desert-freak-out.

Now I can’t get Cobain out of my head. Ariel Pink takes the stage and it’s another Kurt, not the drug-addled bluesman, but the doe-eyed blondie in a dress. OK Ariel Pink isn’t challenging gender boundaries, but with his lank yellow hair and oversized coat I can’t shake the vision. But then the music kicks in, and the illusion vanishes. Tracks like ‘Around and Around’ and ‘Bright Lit Blue Skies’ sound wonderfully tight, danceable (almost…sleazy) and yet ineffably weird. Pink’s songs veer into dark dead-ends and odd parentheses; none more so than the little cheek ‘pop’ in ‘L’estat’.

We hop over to Reds for Spectrum, a.k.a. the half of Spacemen 3 that didn’t become Spiritualised. Spectrum are better than Spiritualised anyway, a great big Sonic Boom of fuzzy texture and noise. Like post-rock but without the whole ‘loud-quiet’ thing, just the ‘loud’. Or one long, hyper-intense rendition of ‘Venus In Furs’.

Kurt Vile’s next and the other Kurt’s ghost has returned. Or at least the guitar-hero Kurt, hunched over a Fender with his hair streaked forward over his face. In fact, there are four mini-Kurts on stage, all equally hunched over their instruments. Smoke Ring For My Halo, Vile’s superlative second record, is fundamentally acoustic, almost delicate in places; or, at least, more so than his debut, Childish Prodigy. Yet here he’s rocking out and it’s sumptuous; his music rocks with energy, but is driven by melodies, lush and plentiful. Vile is a proper songwriter, his music underpinned by repetition – of phrases, of riffs – but defined by its subtlety, neat chord changes and catchy harmonies. His snarling vocals sound like Kim Gordon, unapologetic and visceral.

And then finally Animal Collective. For the ‘important’ band of our times they’re unassuming (no David Bryne or Bjork-esque visual chicanery for them). That’s part of the appeal I think, their everymanisms, their boyishness. And yet for all that, they are important aren’t they? Simon Reynolds has been busy declaiming progress in music of late, but hearing Animal Collective’s set you can’t help but call it new – not just new tracks, but pop music presented in a fresh way, lyrics about everyday life, the music of an avant-dance band inhabiting the body of Nineties indie. When they play ‘Summertime Clothes’ and ‘Brothersport’ the crowd surges forward in approval; Animal Collective cease to be a regular ‘band’, and become something more interesting, somewhere between Cobain and dance music.

Afterwards we skip downstairs for Omar-S, and he’s incredible; the transition between ‘indie’ band and house DJ isn’t even that noticeable, to the credit of Animal Collective. At the end of his set, with the house manager bearing down on him and the crowd baying for more, Omar keeps playing, with the lights up. Sunday starts with Group Doeuh, and it’s too much for Sunday morning, these intense Saharan jams (real desert rock) in Centre Stage, now almost oppressively dark, and stinky from spilt ales on the carpets and other aromas. We grapple with a couple of songs, and then stumble back out into the clutches of aire fraiche.

Returning for Oneohtrix Point Never, and the music suits the surroundings better this time. With the lights turned down low and Daniel Lopartin’s hypnotic, crystalline visuals projected behind him, while blinding strobe lights search forwards into the bingo hall, it looks faintly Ballardian; some end of the world gathering, assessing our loses in former places of popular worship. His music swirls with complex and opaque electronic glitches and spasms. Like a kind of oblique piece of modern art, it’s impenetrable but objectively beautiful.

Then it’s dinner, and then Gang Gang Dance, and…wowzer. They make Animal Collective seem positively conservative in comparison, singer Lizzi Bougatsos sewn into some mad skin tight offering, eventually leaping into the crowd with a flag, as her band’s music swirls around her. Gang Gang have always sounded to me like a straight-up dance act trapped inside something stranger, and their last few records have moved edged the grooves further and further into their sound. Strangely it’s English electronic music that they’ve taken inspiration from (maybe it’s darkness, it’s melancholy): first grime, and now, seemingly, funky house – ‘Mindkilla’ sounds so good tonight.

Afterwards Animal Collective take the stage again… and play the same set as the night before. Looking on Twitter afterwards a lot of people seem to be annoyed that a) they didn’t play all ‘the hits’, and b) they repeated themselves. To which I would argue that a) what do you expect from Animal Collective – just ‘My Girls’ played ten times? And b) hmmm… I guess they were trying to do it again for those who missed it once. Or maybe to work through the new songs again, which still sound great. Or maybe just because they can - it’s their festival after all, right? Not ours, or grunge’s or dance music’s. Because Animal Collective are at the forefront of what it means to be an ‘indie band’ these days (if it means anything at all), and we all take our cue from them, even if, at first, it’s hard to understand.