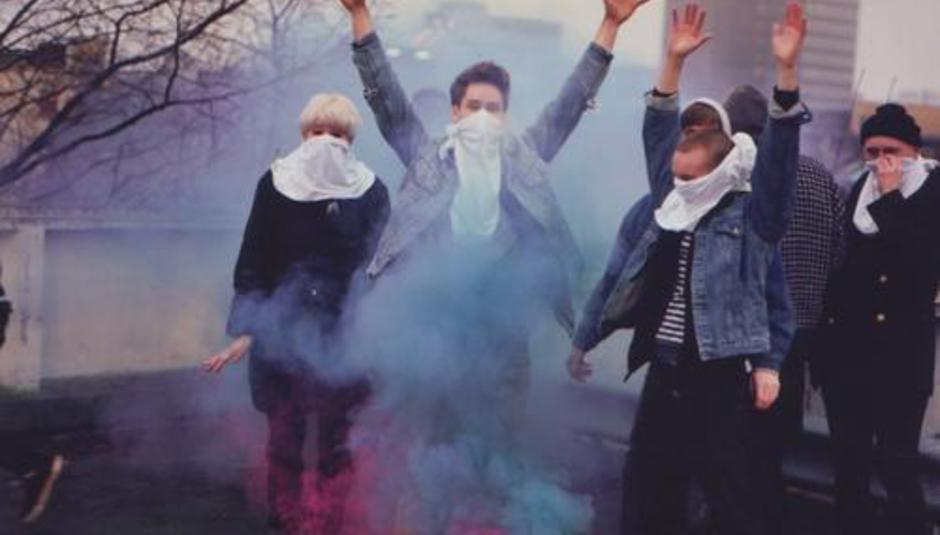 World Unite Lucifer Youth Foundation. What does it actually mean? It's all part of the mystique surrounding WU LYF, a band it seems everyone has an opinion on even if the majority haven't actually heard a single note of their music. Already causing massive divisions of opinion, from those that consider them to be potentially the best new musical group to emerge from these shores in years to those seemingly unimpressed by what they perceive as being little more than style over substance.

While not quite at the fisticuffs stage just yet, it's fair to say that even on DiS, there's no shortage of onlookers ready to cast the first stone, even if some of the tales they tell and so-called accounts of the nights in their presence are exceedingly far from accurate.

Of course, the more cynical among us would suggest most of the hate stems from the band's own persona, particularly their refusal to play the media game and pander to every whim expected of them ("I wish we'd never spoken to the media. I wish they didn't feel the need to write about us" singer/keyboard player Ellery Roberts will proclaim later). Others would probably put it down to the fact much of the resentment lies with the way they've allegedly been "marketed", particularly as their co-manager, one, is a founder and creative director of marketing agency as well as being a former employee at Factory Records. Add to that the fact their other manager has a successful background in music PR whose clients also include Friendly Fires and M.I.A. among others and it's easy to see why such doubts creep in.

Three months ago when first DiS first enquired about the possibility of speaking to the four band members, we were politely refused. But then twelve weeks is a short time in the music industry, particularly when your debut album is about to hit the shops in forty-eight hours time. Having embarked on a complete about turn, we're informed that WU LYF, the band, are only too willing to engage in conversation prior to their show at Sheffield's Queens Social Club, and this is the result of our encounter...

It's early evening on a balmy Saturday in June. On the other side of the city the Arctic Monkeys are playing their biggest hometown show to date. Here, soundcheck complete, DiS finds itself sat outside the relatively smaller Queens Social Club with the collective members of WU LYF. Later they'll play an energetically well received set culminating in a stage invasion where equipment gets trashed, not the band seem that concerned. Beforehand, there's the small matter of the interview, only their fourth ever, and second to any British publication. Having gone to great lengths to keep their identities a secret in the past, the Manchester based quartet - Ellery Roberts (vocals, keyboards and unofficial band leader), Tom McClung (bass), Evans Kati (guitars), and Joe Manning (drums) - seem prepared if a little uncomfortable for the next thirty minutes or so they'll spend in our company.

The opening exchanges are a little nervous and fraught to say the least, THAT album review unsurprisingly high on the agenda of conversation topics. "We try not to read stuff like that but it's hard not to" admits bass player McClung. Ellery Roberts takes a different perspective. "I only care about what people I respect say. If some faceless guy sat behind his computer doesn't like us then...fine."

Swiftly moving on, the whole World Unite Lucifer Youth Foundation manifesto, for which the band's name is an abbreviation seems to have garnered most of the interest that came their way in the first place. "It's just a name man..." insists guitarist Evans Kati. However, the whole ideology behind the band suggests the intention is for WU LYF to represent more than just a name. One glance at the band's newly updated website blows such a response in the water, its content ranging from an exclusive membership scheme claimed to be based on the ethos of Barcelona Football Club ("By the fans for the fans") to detailed explanations regarding their reasons to sign a publishing deal with Universal, something which we'll touch on in more detail later.

"You don't make money out of selling records. You have to do other things to survive. We kind of thought that if we were not going to make any money from selling our music, we had to create something that was real without having to abide by some rule like using our music on an advert." - Ellery Roberts.

The discussion switches to television commercials ("McDonalds we'd gladly let use our music. Oxfam can get the fuck out" spits Roberts mischievously) and political affiliation, David Cameron's usage of The xx during last year's election campaign raising numerous eyebrows around the table. At this point, the controversy surrounding marketing entrepreneur 's involvement with the band is brought up for the first time.

"The only people that seem remotely concerned by Warren's involvement are those that don't have the integrity to judge something on its own merits without creating some superficial scenario to justify their own egos" declares Roberts, visibly unimpressed by suggestions to the contrary. "We're not here to apologise for our existence."

DiS decides it's time to play devil's advocate. After all, it's hard not to concede there's been some degree of hype around WU LYF whether it be the way the band's name was talked up in the music press or on message boards long before anyone had heard any music or the way songs mysteriously found their way onto internet blogs and file sharing sites, even in the embryonic stages of the band's existence. Surely they're reasons alone to be suspicious?

"I think the whole mystery thing that people tend to focus on has been a complete farce", says Roberts, resoundingly. "We've never shied away from telling people who we are. We've had a Facebook page for eight months or so, regularly placed our own music videos on You Tube, you know, what more do you want?"

While that's true to an extent, the overriding difference that sets any band apart from the hundreds of thousands of other bands on sites like Facebook and MySpace is quality control, for which someone (i.e. the band's management), had to take ultimate responsibility.

"Too many bands give out too much irrelevant information that's just not associated with their music", decides McClung. "If I want to listen to someone's music, I don't necessarily want to read about how they got together, or what makes them tick. It's quite an objective thing with us. We'd rather people like us for how we sound not us telling them who we supposedly sound like."

"It's a lot easier to just say nothing" adds Roberts, nonplussed. "We're not trying to control and regulate the way people should enjoy music, but the way most bands do things honestly doesn't interest me, and I don't feel any obligation in the way we do things just because other people may do them in a certain way."

Of course no one would still care if it wasn't for the music, and already their debut long player Go Tell Fire To The Mountain has created something of a storm. While yours truly sits firmly in the celebratory camp - listening to songs like 'Heavy Pop', 'Dirt' and 'LYF' for example it's difficult not to become emotionally attached to such passionately executed statements - there's still an element of mystery surrounding the way Go Tell Fire... came together, from the length of time it took to record to where and how such a record was conceived, not to mention the evolution of early demos like 'Concrete Gold' and 'Heavy Pop' into the sprawling monoliths that now exist on the album.

"If anybody wants to know we'll happily tell them" insists the diminutive frontman. So spill the beans then if you please...

"We produced it ourselves and recorded it over a three week period in St Peter's Church in the Ancoats part of Manchester" adds Roberts. "There's ideas on the album that are about two years old and then some that we literally added ten minutes before recording it", explains Kati.

Ah, Manchester, so much to answer for as was once documented. While not suggesting there is any jealousy or resentment from other parts of the city regarding all the attention that's been bestowed upon WU LYF, we feel it only right to let the band themselves have their say on such matters, particularly as they seem a hell of a lot more relaxed than at the outset of our conversation. Ellery Roberts is only too happy to oblige.

"I think there are a lot of people in Manchester who are quite wary of us, but they just tend to be people in really shit bands. Day after day these people do rubbish things, whereas we've been lucky enough to make a record that all four of us are proud of, and other people believe in, so for that reason we've had a moderate amount of success in comparison. Their excuse for this is that we've been hyped and had it easy, which isn't the case. Ultimately it's their choice. Maybe if they'd concentrated more on their own music rather than on what other bands are doing they'd be the ones in a similar position? It's like that review on DiS. The guy that wrote that would probably rather listen to the new Friendly Fires record than us, and that's fine, but that piece seemed to be more about than our album. It would annoy more if I felt completely insecure about our relationship with Warren, but I like the man, and totally respect what he does, so people can take as many cheap shots as they want. At the end of the day, I'm not embarrassed by it. I'm not trying to hide it."

With that, the singer is on a roll, launching a scathing attack on manufactured bands that have stylists among other things. Nevertheless, one point that keeps nagging away is that publishing deal despite the band's protestations at doing everything on their own terms. Tom McClung offers an explanation: "We're assumed to be alternative, but we never said we were. I don't see a problem with being mainstream."

"Fearne Cotton played us on Radio 1", quips drummer Joe Manning. "She said we were dead indie man, it made her wet!" cue a long debate about the aesthetic merits of Fearne Cotton and Holly Willoughby on 'Celebrity Juice'.

Finally, having briefly touched upon their tour schedule which sporadically takes them from places like Leicester's Y Theatre to the Sydney Opera House ("We don't want to do conventional tours. We want to play places like Memphis" - Tom McClung) via more less than favourable asides regarding journalists from rival publications ("We appreciate it when someone that's supposed to be writing about music actually bothers to listen to the record." - Ellery Roberts), the band give us a glimpse of what the future holds for WU LYF. "We want to write some new songs as quickly as possible", insists McClung, enthusiastically defiant to the end.