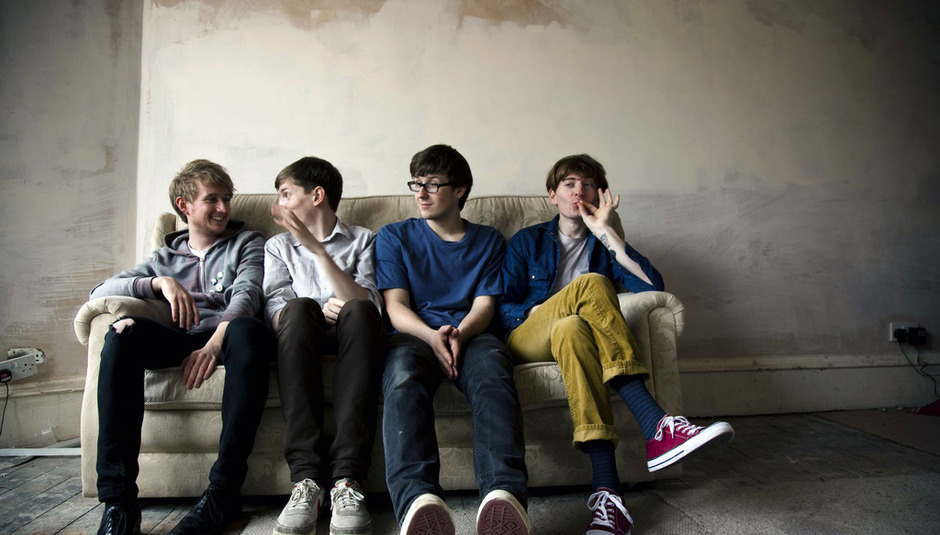 To celebrate the release of their debut album, Copy Haho have put together a guide to their hometown, Stonehaven in Scotland.

"Wow, writing just 500 words on the town of Stonehaven is a daunting task. I did read a previous feature on the city of New York, which had a similar word count, and it's quite a bit bigger than Stonehaven, so I think I’ll manage...

Stonehaven is the oldest place in the world, sort of; the fossil of ‘Pneumodesmus newmani’, a type of millipede and the world’s oldest air-breathing invertebrate, was found on a local beach. The first director-general of the BBC was born in Stonehaven, and the town’s most famous son, R.W. Thomson, invented the modern tyre and the fountain pen. In short: Stonehaven is better than wherever you live, and here’s why:

Having a population of 9,577 (at the last census count in 2001), Stonehaven has a disproportionately high number of pubs, eleven or twelve by my count. However, only one of these pubs is really worth a visit. The Marine Hotel is situated at the harbour, and boasts a greater beer selection than most pubs I’ve been to in the UK. Over 100 craft beers from around the world, in bottle and keg form and at ridiculously reasonable prices – all pints are less than £3, and that includes favourites like Blue Moon. Suck on that, city dwellers.

Having a population of 9,577, Stonehaven has a disproportionately high number of takeaways, thirteen by my count. It’s famously the ‘birthplace’ of the deep fried, battered, Mars Bar – if that’s something to even be proud of. Google tells me that Jennifer Lopez has tried one of these delicacies. Don’t be swayed by those glitzy Hollywood starlets, and trust me instead: they’re absolutely disgusting. Obviously. It’s a Mars Bar. In batter. Deep fried. Stonehaven is also home to four award winning fish and chip shops, which is pretty impressive really. As a result I’m always disappointed when we have fish and chips on tour. One of said fish and chip shops burned down a few years ago. Is it libel if I suggest that it was a little suspicious?

The music “scene” in Stonehaven consists of the usual secondary school bands and an annual folk festival which attracts Billy Connolly, and other visitors, to the town each year. The place to see cool bands is probably my living room, where many have stayed after playing in Aberdeen.

My parents absolutely love playing host, so email us if you want to visit. The only folk festival concert I’ve attended was the World Paper & Comb Championship, last year. It was held in the church next to Joe’s house and it was like a scene from ‘Twin Peaks’. One of the hosts was inexplicably wearing what I think was a bridesmaid’s dress.

George Best played a charity match here and Sir Alex Ferguson used to camp in Stonehaven when he was (presumably) a child.

You’ll remember I mentioned Jennifer Lopez earlier? Well, Mel Gibson shot the film, ‘Hamlet’ (based on a play by William Shakespeare I believe), in Stonehaven in the late 80s or early 90s or something. This was before we knew about the REAL Mel Gibson, of course. Scarlett Johannsson was rumoured to be shooting a film about Mary, Queen of Scots, here but I’ve not heard anything more about that. I have vague memories of some ‘classic’ Hollywood actor such as Cary Grant being a regular visitor to the town but I can’t find anything to back up my semi- claim. You’re nobody unless you’ve been to Stonehaven, or rumoured to be in Stonehaven at some point, it seems.