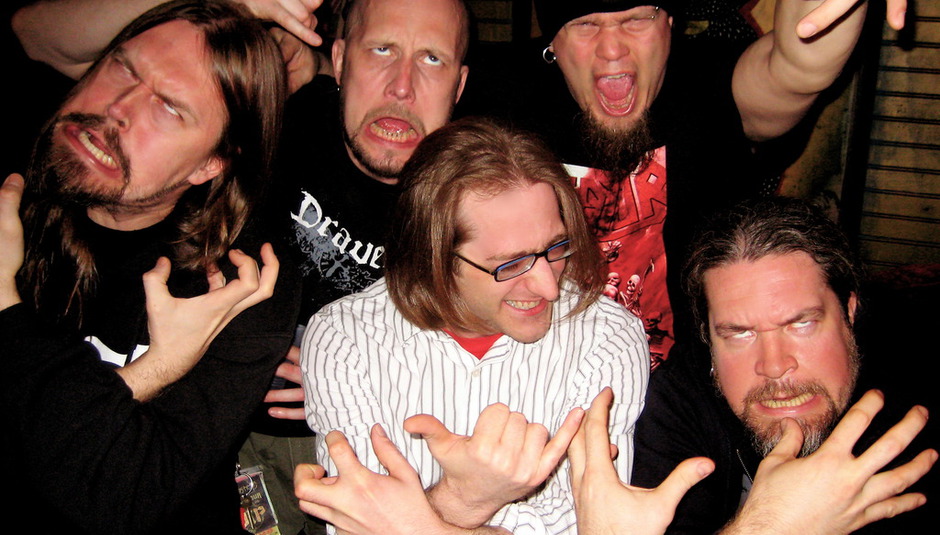 Meshuggah, Metal & More: An interview with Bang on a Can's Derek Johnson

Meshuggah, Metal &amp; More: An interview with Bang on a Can's Derek Johnson

Or Meshuggah, Metal, & More: the Ever Expanding Electric Guitar: An interview with Derek Johnson by Jessica Schmitz of the Bang On A Can All-Stars

Throughout our nearly 25 year history, Bang on a Can has always aimed to expose innovative, genre-defying music to new audiences worldwide. Many of the musicians we work with are masters of musical cross-pollination in their own rite: from bossa nova singers/percussionists to orchestral performers/electronic improvisors, Bang's pool of collaborators is a virtual melting pot of artistic influence.

One young musician who is at the forefront of this musical hybridity is guitarist/composer Derek Johnson. Derek's work ranges from classical composition to post-rock improv and everything in between: a current project brings him into the world of Meshuggah's metal examining the role of the electric guitar in bands and beyond....

Derek Johnson: I first heard Meshuggah in 2002 and remember it very clearly. I was a composition student at the Aspen Music Festival and School and came upon their recently released album “Nothing” at a CD shop (back when there were still CD shops). Some friends and fellow composers back at the Indiana University Jacobs School of Music, where I was studying, told me I had to check them out.

JS: What was it about the music that attracted you?

DJ: Although I started at the piano, my first profound engagement in music came about playing electric guitar in a band throughout junior high and high school. From the standpoint of influence, we started at Metallica, journeyed through Slayer, and continued to do intense research to find the most passionately heavy, technical and brutal bands we could draw influence from. It was a pretty amazing time in metal, where new underground sub-genres were popping up and really breathtaking music by both American and European bands was being developed. As unlikely as it sounds, this “intense research” eventually led my ears and interest into jazz, and eventually into the world of concert music where I found my true calling. Still, this lasting first contact with the unlikely sub-genres of metal always had a special resonance. When I first heard Meshuggah it was instantly apparent that I was listening to something that synthesized everything I held dear, the sonic intensity of metal, an extremely well thought out and refined sense of composition, and a performance practice that projected with utmost clarity the compositional intent.

JS: Tell us what you're doing with their music.

DJ: Shortly after my first contact I become fascinated with figuring out how the music was constructed and began transcribing their albums into standard notation. They have a very special approach to rhythm. Their music is almost exclusively set in large symmetrical units of 4/4 time (8, 16, 24 or 32 bar phrases), but, inside these larger units highly asymmetrical patterns cycle against the even time creating a very distinctive sense of syncopation and groove.

JS: How/when did you first meet the band?  Did you cold call them?

DJ: Shortly after my doctoral composition recital I took a “break” and made a complete transcription of their monumental album “catch 33”. I sent a draft of my manuscript to my dear friend and fellow composer Guilherme Carvalho in Paris to take to a concert they were playing, and encouraged him to pass it along with a letter explaining both my enthusiasm for their music, and my hope to eventually publish a series of transcription books. When they came to the states in support of that album, I went to the show and introduced myself and was happy to discover they were very excited and supportive about the idea.

JS: What projects are you currently working on with them/ their music?

DJ: I am very slowly, amongst activity as a composer, electric guitarist and university professor, working on transcriptions of their complete discography. The eventual outcome will be a full score and a set of parts for each album that projects the compositions with complete accuracy. The notation will give a view to the practicing musician, composer and theorist of how the music functions in larger units of symmetrical 4/4 time, while also giving relevant and practical information of how the asymmetrical patterns are organized. In addition to this, each edition will include photos and commentary by the band on the creation of the album. It’s a pretty massive undertaking, but, it’s well underway, its been years in the making, and when it is finally ready, it will be well worth the wait.

JS: Any crazy stories from your interaction with them?

DJ: Since my first encounter with the band on the Catch 33 tour, it’s been my pleasure to hang out and catch up each time they have been back in the states. I have to say they are all really nice and down-to-earth guys. They have been developing a very special thing for over 20 years, and have done so by maintaining very tight control of their enterprise, both creatively and operationally. They have a really strong and long lasting relationship with their road crew, and, they put on a hell of a good show.

JS: A main focus of your guitar life is developing a solo program.  Tell us about this- what is your goal in this program?  Do you feel the guitar is an underestimated solo instrument?

DJ: For the past year or so I’ve been working up a program of new concert works for solo electric guitar. The original impetus came about by a “special prize” in solo electric guitar performance offered at the Gaudeamus Interpreters Competition in Amsterdam. This suggestion has triggered an amazing adventure developing a full evening program (and then some) of solo works that I’ve been presenting in various recitals and, very soon, will release in recording. At first the prospect of acquiring a full-length program of solo electric guitar music seemed rather daunting, but much to my delight, I found there is a rather vast repertoire to draw from.

The electric guitar in concert music is a real up-and-comer, and, frankly, it’s not surprising, as the instrument is such an integral part of the vast musical landscape outside of concert music. It is this landscape that fires the imagination of living composers along with the long and wonderful line of music within the established tradition. There is a long history of composer drawing inspiration from other sources. Haydn, Mozart and Beethoven all adapted Turkish music, Bartok transcribed and infused Hungarian, Romanian and Bulgarian folk music into his own personal language, Stravinsky’s entire output is colored by extensive borrowing, not only the Russian folk tunes that provide the basis for the Rite of Spring, but also a large collection of music inside and outside the classical canon, and, last, but certainly not least on this truncated list, is Steve Reich, who assimilated the rhythmic procedures of Balinese and African music, along with the harmonic vocabulary of modal jazz to create his own very rich and distinctive musical voice.

The electric guitar in concert music is still in its infancy, but is steadily growing thanks to the interest of composers writing for it and the growing numbers of players developing how to do it. It will always be behind in competition with orchestral instruments whose performance practice has been developed over hundreds of years, but, in so many ways, this is a great thing. Instead of the crushing weight of precedence brought by the repertoire and lineage of interpreters in concert music, the composers and performers involved in writing for and playing the electric guitar have more varied and eclectic line of forbearers.

For more information on Derek, visit his Youtube Channel.

Bang on a Can perform at the Barbican's Reverberations series of events, exploring the influence of Steve Reich (info).