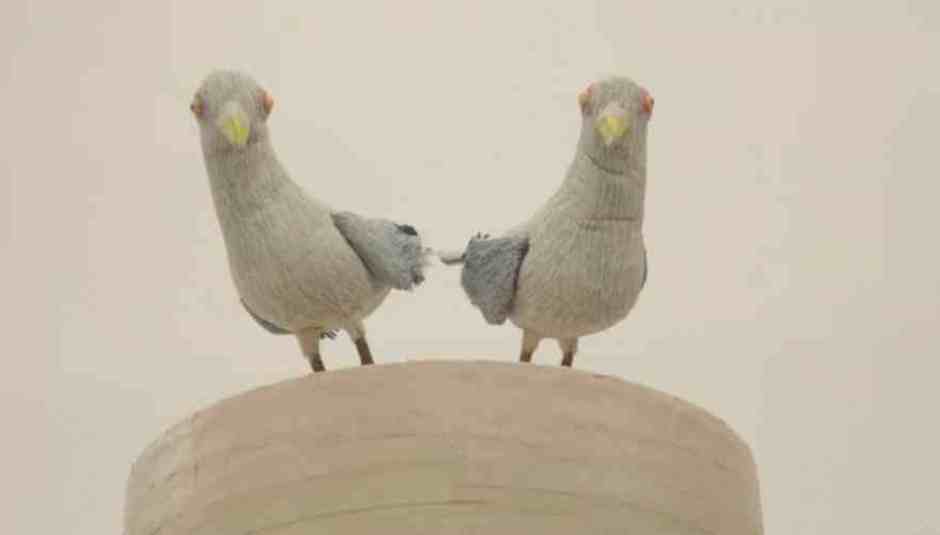 You would think that after Record Store Day’s bonus release date there would be no singles left in the music cupboard. You would be wrong, because rather like footer, music NEVER ENDS.

Dog love it for not.

Metronomy - ‘The Look’ (Because Music)

The video for Metronomy’s latest has some of our flat-footed feathered friends. And they are the very definition of insouciance, so if someone asks you what insouciance means you can just point at the hot new promo from Metronomy and they will think you are well clever, even if you are actually dim. What an absurdly good looking band they have become, that sailor-suited drummer in particular. And what a pristine pop song; there are the muted organs of a pier ballroom one minute and neat falsettos the next and it is as if Joseph Mount had a tiny fairground in the palm of his hand. And he decides when it will stop, and when it will go, and if your particular waltzer car deserves another exhilarating push. I think it is a song about going out with a smartarse but I am not completely sure, I am rubbish at spotting bad ‘uns until I have wasted all my best years on them. Later on in the videothing the seagulls have a race on some dodgems. Why? Because why not.

If I ever earn enough money to become a dread Hearst-o-like eccentric, ‘Because why not’ is very definitely going to be my catchphrase. And I will not die alone because when you are that rich you can buy people.

When I met Danger Mouse (who I mean to tell you, was a dreamboat), I mentioned the word Morricone and it was a bit like I had flipped the gladswitch; he was much, much giddier and bright of eye thereafter. ‘Black’ (and the Rome project in general) is his swansong to the sort of music that is played in deserts by cactus people, it is about as widescreen as it possible to be without anyone ringing James ‘ruddy’ Cameron and asking him to film something interminable that has the word ‘deep’ in the title. Also, because sometimes it is actually worth showing your marking, I can tell you that after playing ‘Black’ a few times and getting all drunk on its atmoss, I was moved to crab off and play a lot of Lee Hazlewood. Which is when I tried to work out how it is possible that a song can be both rinky dink AND full of menace. ‘Black’ is a beauty, it has nothing to do with now but this is okay, nobody panic.

I think this song has been composed in order to quench the precise part of my woman-mind that responds so enthusiastically to Keane’s ‘Spiralling’. I will play it when you are out. And I will have Chelsea Girl all cued up and ready to go as soon as I hear your footsteps on the front path because I am not an idiot, even love has its limits.


The Grubby Mitts - ‘To A Friend’s House’ (Lost Toys Records)

The Grubby Mitts want to take you on a thoughtscursion, their song the refrain. In many ways it should be the dreadest thing ever – a series of young men dramaticking their chops around the line ‘the way to a friend's house is never long’. But there is something oddly moving and hypnotic about it. Perhaps it is just the sentiment; ambling round to someone else’s house, the promise of homecooked vittles, only a churl could object.

Lapalux - ‘Many Faces Out Of Focus’ (Pictures Music)

Thoroughly intriguing EP of brittle pop music in which no element is allowed to stay intact for very long. What we are seeing here is a wave of rather emotional electronic music in which traditional things like words are not deemed necessary – so although This Sort of Thing is not always successful, I am keeping my eye on it because I am intrigued. If James Blake has proved language is not necessary, and that the component parts of words, or just human noises will do when you are trying to communicate an idea, that gets me pretty excited. It is sort of like the musical equivalent of when you tk ll th vwls t f wrds bt thy stll mk sns. Is it? I’m going to have to come back to you. More here.

Polly still has a wasp in her weft about war because it is still well bad and because no one has stopped fighting since the release of her last. If only that were all it took; a few perfectly composed, broken-apart folk songs edged with filigrees of metallic warmth; a few nicely-shot films that cleverly present a different mix of the song so that the video becomes an artwork in itself; a few giveaway grins as she sings ‘America!’ in a voice she knows is silly, but it is alright, because said silliness does not detract from the sheer heart of the song. ‘The Glorious Land’ is a marvel, utter class of course, but I cannot help feeling that to paint your torment in the visual language of the 1940s is a bit of a copped-out misstep. For all the beauty here, surely her point would be better serviced with less pretty shots of tin hats from the olden days of yore, and more sharp-focus spotlights on what happens when something capable of firing 485 - 635 rounds per minute is pointed in general direction of actual humans, actually today.

Tim & Jean came round at the weekend, all high spirits. And they were like ‘Why don’t you find yourself a nice dress to wear?’ so I went onto eBay armed with a stopwatch and won three things in a row. Then I realised they are singing a pop song that is partly about vile Western consumerist slagbags or at the very least how possessions do not make you happy. As I do not concur, and as their song is too happy by half, I have cast it in the box marked Almost Never. The Serious Ones amongst we should beware: ‘Come Around’ has synths as high, wide and unsubtle as Ma Larkin having a skag picnic. (A drug reference for you there, which I nearly but do not quite apologise.)

YUCK are very popular but it is like there is something invisible between me and them, like a forcefield in a cheap 80s sci-fi. And I am putting my hands up and pulling my best amateur anguishface, but I. Just. Cannot. Get. Through. It isn’t going to happen, YUCK, let’s just call it inevitable wastage, on the food mountain of indie you will be my uneaten furry pot of hummus. Furry chick peas, everyone.

Extraordinarily likeable funk workout with the requisite bassline that sounds as if it were being played on one of those slightly alarming bouncy balls you can get for almost no pence from dispensers outside arcades. The difference being that Stepkids are deft controllers of their ball, where we civilians would normally flail; ineffectual as square-ohs on a rounders pitch. And while I should like to spend a few minutes remembering being called a slag in P.E., it is more important I tell you how the other difference here is in the vocals, which have a modern fuzzy wash applied, the overall effect being rather like Animal Collective had dispensed with the earnest and started wearing denims that are wider at the bottom than they are at the top.


If I could drive and if I had a car and if it was one of them cars with no top on and if it had no back seat either because why would you have a backseat when you can have woofers I would play ‘Hold It’ to upset old peopl, even though I love The Olds and have not listened to d’n’b since 1996. It is worth tracking down the video thing because Mark System looks like he works in a Barclays. Mark System does not work in Barclays he is a Proper Geze who employs bass like he had bought a job lot of it off of a bloke down the pub.

Wendy is on Twitter, here. She doesn't know about you but sometimes she thinks it is nice to dispense with commas altogether.