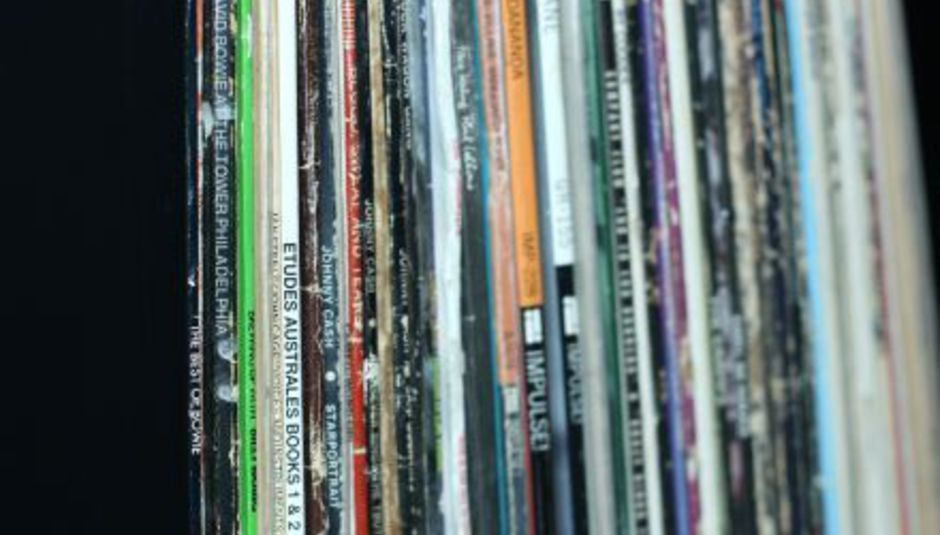 There’s a temptation to approach a local column as if you’re writing some sort of musical prospectus - a sort of ‘come to our city ‘cus our city has the best music scene’ manifesto. And, to be fair, Bristol is pretty great but, as with any city of a decent size, it’s got it pros and cons. We have a city internationally recognised as one of the world’s great hubs for forward-thinking dance music - pretty much any week of the year you can easily find the sort of club line-ups that only London can really match in the UK. But on the flipside of that, at times, any musical goings-on that could be categorised under the broad umbrella term of ‘not-dubstep’, can get treated almost like a minority activity. Something that, for people who aren’t fans of dance music, I can only imagine must get fairly annoying.

Either way, the point I’m trying to make is that, as much as I think Bristol is a fairly fantastic city, there’s no point me trying to sell it to you. After all, if you’re someone living here who’s reading this, you either agree with me and have no urge to leave or, for whatever reasons, you’re stuck here and better make the most of it. Instead, take this as a sort of scattershot attempt to portray some of the more exciting aspects of the city’s music scene at the end of the first quarter of 2011 - a collection of things that are worth sharing. Of course, I’m sure there is probably a multitude of things that I’m missing out here, which is where the comments section below comes in - so please add links to anything you think has been missed and is worth checking out.

For as long as I can remember Bristol has had a turbulent relationship with its record shops. Obviously it goes without saying that now isn’t a great time to be in the vinyl selling business anywhere in the world, but for a city with such a rich dance/DJ-driven musical heritage it seems surprising that we don’t have more decent record outlets. Over the past decade we’ve lost a number of good stores (Imperial and Replay spring to mind), but the city was dealt yet another blow towards the end of 2010 with the closure of Rooted Records – the excellent dubstep-centric record shop run by Punch Drunk label-owner Peverelist.

Good news, however, comes in the opening of the new Idle Hands store on Stokes Croft by Chris Farrell, head of the Rooted/Punch Drunk affiliated label of the same name. Right now the shop seems to be picking up directly where Rooted left off – specialising in dubstep, funky and d’n’b releases as well as providing a useful outlet to pick up tickets for local club nights. The idea of opening a small record shop in Bristol in the current economic climate is certainly no enviable task; but it’s an undoubtedly great thing for the city that there’s someone out there with the ambition to take it on. From initial trips inside they seem to be doing a good job of putting together great dance-focused store, so all I can say is best of luck to them, and encourage you all to give them the support they deserve. Their Facebook page is worth bookmarking for news on in-store events, release info and the like.

On the subject of record shopping, Saturday 16 April is Record Store Day (as I’m sure you all already aware). Along with the aforementioned Idle Hands, Rise on the Clifton Triangle and Head in Broadmead (i.e. the place that was formally Virgin then Zavvi) are the places to join the scrum to get your hands on those limited edition releases. Rise have also announced a day of in-store events including live sets from Minotaur Shock and SJ Esau among others, and an exhibition of gig-poster artwork - check full details here.

Top of the list in terms of forthcoming attractions (for me at least) is this week’s Mountain Of 4, hosted by Bristol’s most reliably interesting gig promoters Qu Junktions. The night brings Kevin Martin’s King Midas Sound, Oneohtrix Point Never and Games (or Ford & Lopatin as they’ve now had to rename themselves) to Bristol, across two venues – The Arnolfini and Start The Bus – this Thursday (7 April). The same promoters have some other enticing looking stuff on the horizon, including A Hawk and a Hacksaw at The Polish Club on 13 April, but in general their website is always worth keeping an eye.

Also recently announced, and looking very good, is the new single-day Simple Things Festival, which is hosted by a conglomerate of local promoters and taking place across various venues on Sunday 1 May (don’t worry, that’s a bank holiday weekend). The line-up so far includes live sets from Gonjasufi, Baths, Daedelus and semi-local girl Anika, along with DJ sets from the likes of Jamie XX and Fantastic Mr Fox, among loads of others – all for £20, which is nothing to scoff at. (Incidentally Best Coast are in Bristol the same night but, as enjoyable as they are, at £12.50 for them alone the evening is a no-brainer).

At the more unusual end of things, St George’s hall is hosting a celebration of the work of experimental composer John Cage this month. The season includes an appearance by ever-brilliant comedian Stewart Lee performing ‘Indeterminacy’, one of Cage’s later-era spoken word and piano pieces on 19 April, which is bound to be worth checking out.

In terms of club nights, right now Stokes Croft’s newly-reopened, legendary rave venue Blue Mountain is the star of the show, with a number of good promoters like Crazylegs and The Blast moving their nights there. Blue Mountain highlights over the next few weeks include The Bustle featuring Rustie, Lil Silva and DJ Q on 15 April, and Crazylegs with Roska, Hemlock recordings boss Untold and Night Slugs mainman Bok Bok on 21 April. As ever, Motion is worth keeping an eye on, with upcoming highlights including the Outlook Festival launch party featuring Mad Professor and The Bug. While back in Stokes Croft, Subloaded continue to host some of the best dubstep-orientated clubnights anywhere in the country, including a massive night at Lakota on 1 May led by Photek, Kode 9, Pinch and Gemmy, along with their regular, and consistently impressive Dubloaded nights at the Croft on the 2nd Wednesday of each month.

Of all the Bristol-based artists currently releasing music, the promise of a debut album from fast-rising producer Hyetal is probably the biggest cause for excitement. As my Drowned In Bristol predecessor Rory explained excellently last year, Bristol’s music scene has been largely dominated over the past couple of years by the rise the colourful, synth-heavy strand of r’n’b-influenced dubstep spearheaded by the likes of Guido, Gemmy and Joker.

If those three producers have become the de-facto heads of what’s sometimes referred to as the ‘purple’ movement, then Hyetal (to dive straight in with a bit of lazy-journalistic pigeon-holing) is heading up the second wave. His releases to-date have shared a fair amount of traits with Guido’s excellent Anidea album - an emphasis on melody, hints of r’n’b, heavy use of thick, mid-range synths - yet he mixes in a broad range of influences, including a professed love for both Prince and John Carpenter.

Debut album Broadcast arrives via local label Black Acre on 2 May and is preceded by the single ‘Diamond Islands’ on 11 April. The album also features previous single ‘Phoenix’, which was easily one of the best dance tracks of last year.

Another Bristolian producer worth keeping an eye on is sometimes-Hyetal-collaborator Julio Bashmore (the two released an excellent EP together as Velour towards the end of last year). This week Bashmore follows up his recent mini-anthem ‘Battle for Middle You’ with a new EP on 3024, the label owned by Dutch producer Martyn. The whole EP is currently streaming over on the 3024 blog, and is out now both as a download and on 12”.

Meanwhile, two of Bristol’s electronic heavyweights make a welcome return this month. Firstly, Tectonic label-boss Pinch has a couple of collaborative tracks coming out on his own imprint: ‘Broken’ - a fairly minimal, classic-dubstep number which sees him working with London’s Loefah, and ‘Paranormal Activity’ - a livelier collaboration with Rinse FM’s rising UK Funky DJ Roska. Both tracks can be streamed over on the Tectonic SoundCloud page.

At the same former Rooted Records manager and owner of the Punch Drunk label Peverelist has a new 12” just out on Hessle Audio - ‘Dance ‘Til The Police Came’ and ‘Fundamentals’ - samples of which can be heard over on his SoundCloud. Speaking of Punch Drunk, it’s worth mentioning the label’s retrospective compilation from the end of last year, Worth The Weight, which is a great starting point for anyone unfamiliar any of the artists mentioned over the past few paragraphs.

Stepping slightly away from the dance side of things, there are few rumblings from Bristol-based bands and artists worth giving a mention. First up, Fence Records-signed four-piece OLO Worms, who have just launch their new website and are currently using it to stream two tracks that may or may not end up on their forthcoming debut album (the band describe them as ‘a snapshot of a work in progress’). Check out the video above for an idea of what to expect, but in a nutshell they do a great line in moody, synth-driven and often-baffling bedroom pop. The band are also putting the tracks out as a limited physical release that includes both songs, a demo mixtape and artwork buried in a jar of soil - a bizarre move fairly indicative of the sort band you’re dealing with here.

Sticking with Fence Records-associated acts (the Scottish label seems to have a surprisingly heavy presence in Bristol), indie-folk artist Rozi Plain as recently posted details of her rather-lovely new single ‘Humans’, which is set for release via Need No Water Records in mid-May. The lead track is the first thing to be released from Rozi’s recently finished, as-yet-unnamed second album that is due to appear sometime later this year. The single and its b-side ‘End Can Come’ can both be streamed over on the Need No Water site and are definitely worth checking out.

Praise the Waterfall Part 2 by zunzunegui

Finally the wonderfully eclectic, Qu Junktions-affiliated Zun Zun Egui have a (relatively) new 12” EP - ‘Kass To La Senn’ - out now on Blank Tapes. The 12” is available to buy from Rise, and will be followed by the band’s debut LP, which is set to be released by Bella Union later this year. They also headline a Japan benefit gig at The Croft on 23 April.