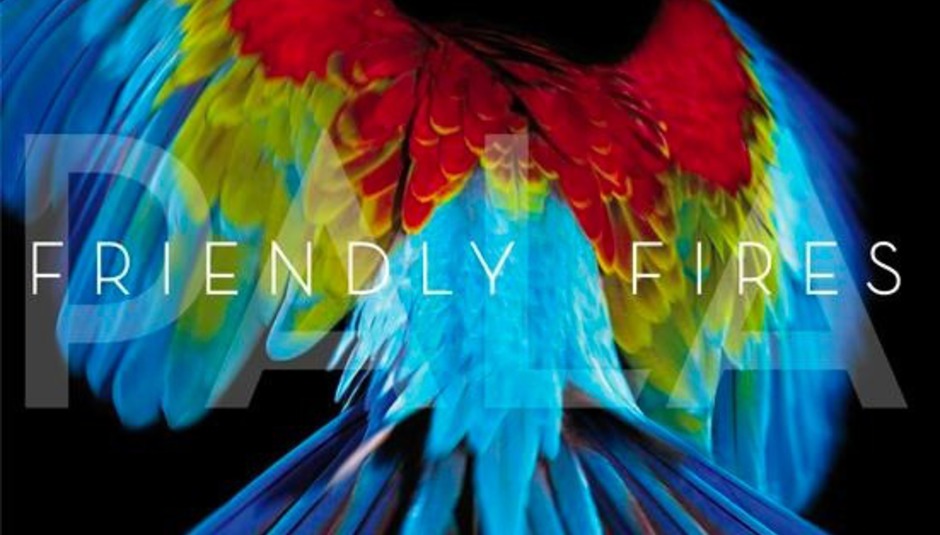 Earlier this week, DiS founder Sean Adams, got a sneaky first listen of Pala, the forthcoming album from Friendly Fires...

I'm really not trying to score indie-points here but I first saw Friendly Fires on the BBC Introducing stage at Latitude festival, waaay back in 2007. To say I was blown away, was a bit of an understatement. At the time, I couldn't stop pondering whether they were the first sign of the UK 'indie' music scene in transition. Not so much a 'game-changing' cultural shift, more of a signifier of a cross-fading from the post-Strokes glut of dog-eared retro guitars to a synth-soaked, laptop-bending, whole new set of ideas, ideals and possibilities bubbling out of British bedrooms. I guess I never quite understood why LCD Soundsystem never dominated the Radio 1 playlist nor the cover of the NME, yet a helluva lot of shonky bands like The Enemy and The Twang were given more than their fair share of time and attention, despite The Ordinary Boys and various other "The" bands failing to capture the public's imagination. It seemed, to me at least, watching a band on the little Introducing stage, grinning a little and sweating a lot, who'd clearly ingested their fair share of punk-funk riffs, that I wasn't alone in believing British pop culture needed something new to shake its hips to, even if them hips were in black skinny jeans.

At the time, I could understand why major label A&R men didn't snap them up, as the climate and context didn't seem right (they weren't hyper-now enough to wow) but thankfully the band didn't let the business of music's disinterest stand in their way of having fun and if you wanted to join in the party, well that was a bonus. I remember reading NME's cussing of 'Paris', just after I'd written this and tipped the band for the BBC' Sound of... poll (spoiler: they didn't make the longlist - Joe Lean & the Jing Jang Jon did tho!) and wondered whether I was a lone gunman once again. Was I utterly wrong, again? Were they just just another band, having fun that sound great in the summer sun?

Fast forward a few years... Their rise and rise from making a record in their garage as an unsigned band to being the Mercury Music Prize nominated, main stage festival act and daytime radio darlings, which they had become by the end of 2009, well, it didn't happen over night or upon a sea of buzz, it was slow, brooding, gradual rise - in fact, almost at the pace of 'Paris', if you want to get all metaphorical about it...

After touring the world, the band flitted between a studio in rural France and the backwaters of London's commuter belt, and crafted Pala, their second album. Earlier this week I was invited to the XL Recordings office, and in a room covered in Radiohead, Adele, Dizzee and MIA posters, a play button was pushed on Friendly Fires new record. And these are my first impressions...

This is the one you've probably heard already with Tron-like euphoria and a whispered "...don't hold back..." atop heavy pianos, which races to a glorious crescendo. This album version is slightly more sprawling. If you've not heard it, it's up on http://www.wearefriendlyfires.com/.

Lots of little flicks of tape reversing, like the black tape of a cassette is about to spool out the speakers like intestines. Verses on this one have a groove a little like 'Jump in the Pool' but cranked to 11. Is this a slightly pounding ode to Cut Copy's 'Hearts on Fire'? Probably not (nor, I'm pretty sure, is it a reference to Weezer's Blue album) but it goes go "This is my heart on fire..." and is sure to incite arm-waving in clubs and fields this summer.

The record is starting to feel like a balmy party bus and I'm surprised no-one has bought me a rum cocktail (tea isn't cutting it). The menacing heaving bass is tempered by chimes and falsettos. This one bah-buh-bah-bah-baaahs quite a bit and the sprinting pace is breath-snatching.

First track that sounds like a gigantic single... if radio can play a racing tribal beat with whizzing whooshingness. Noticed a line about "watching a film with a talking dog..." and my brain starts wondering if there's a hidden Beethoven sample sprawling beneath it all.

Sounds a smidgen like Justice's cheeky disco. Drums sound ginormous toward then end before a sort of robo-stomping synthetic carnival troop rumbles in. Some intricate time-changes in here. Starting to get the feeling Pala might take a few listens to digest it all.

The title track is the first time the pace relents. A chilling, rattle-shaking, half-stepping, brooding number with Ed Macfarlane's vocals mistily drifting across it all. Pretty much what I'd imagine the minutes before some thunderous Aztec ceremony begins might sound like, in the digital age.

Sounds a little more like something from their previous record in pace and hand-clapability. Oooh wooh's Prince-ishly a little toward the end. Got a feeling this track might end up being a real fan favourite or a big hit, it's hard to tell.

A little like 'Kiss of Life' with big bass line and skittering electronica. "Alllll I, want, is to feel, true love..." is the big heaving chorus hook. Think my scribbled notes say it: glides on a sea of rising aaahs before twiddling guitars erupt. Yeah, that.

9) Pull Me back to Earth

A little more of what came before but a stomp and little R2D2 freckles. A little more Rapture (klang!) than the rest of the record but with a big twinkling chorus and a few more rocket ship taking off whizzy-whooshy bits.

This closing track is breathy, with a grumbling bass and dizzying (in a good way) time-switching drums. Almost Scritti Politti but with odd dripping synths. Great way to end the record!

Conclusions...
At times the playful bits were a little overwhelming to take in and fully appreciate on first listen (might have helped if I turned it down a bit). Far more fast-paced and verging-on-bombastic than I anticipated, especially from a band whose last album held back a little and drifted into more shoegazy textural territories. Having said that, the 'carnival' feel to their live show certainly dropped some massive hints as to where they were headed. It's a great listen, there's a definite party thud throughout and yes, you can judge this record by its tropical cover... Pala is released on May 16th via XL Recordings.