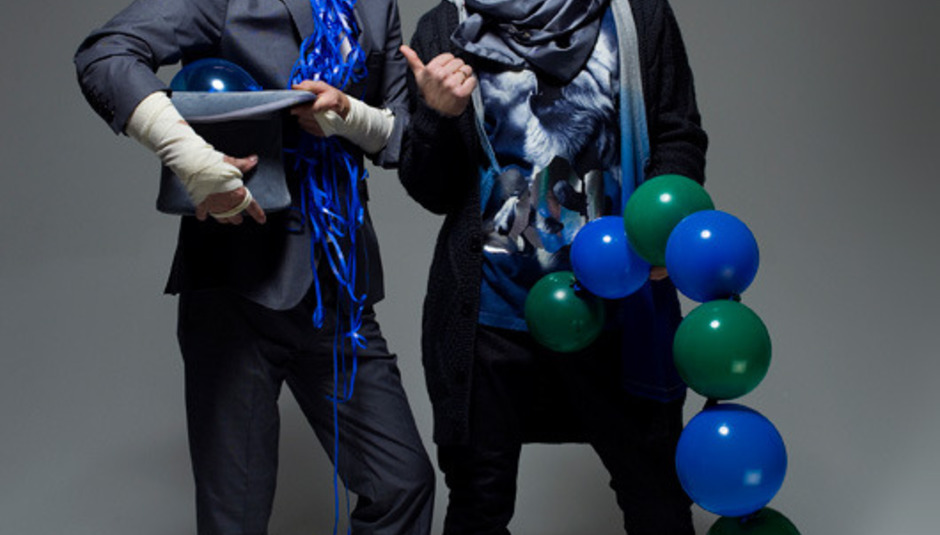 Friends since childhood, Svein (the darker-haired one) and Torbjørn (Aryan techno viking) have gone on to release three more well received albums, and the videos supporting their singles have regularly won praise for their wit and imagination.

DiS met Röyksopp shortly before their recent appearance at Bug, Adam Buxton’s regular celebration of music videos at BFI Southbank, where they were to join Adam on stage for a celebration of their much-admired promos.

DiS: So you're here in London to talk about Röyksopp's videos - Do you think there’s a lot of good music videos around at the moment?

Svein Berge – Actually I find that I'm a bit disappointed with music videos . Every now and then you see a good one, but nowhere near as many as there should be. Much more flamboyant and insane stuff happened last decade, when the format wasn't really tried out yet, and they also had a good run in the 90s.

Do you have a lot of input into your own videos?

Torbjørn Bruntland - The main input we have is to choose collaborations, like a DJ choosing the records that he plays. We read through treatments, ideas, and find what's best suited for us. As then we pass on the artistic freedom. At times we get involved, to a greater or lesser extent - we always try to steer in some way, without interfering with the director’s vision.

SB - We work with John Moule (their video commissioner) - we tell him what we have envisioned, and he knows our preferences in terms of artistic expression, and what we like in terms of movies, pop culture references - and he will start scouting a bit. And he knows that we prefer to work with raw talent, people that might not have done so much yet.

So what kind of ideas have you contributed?

TB – We were very involved with the character development in the Poor Leno video, to give one example.

Your music seems to crop up a lot in various places, in adverts and soundtracking games and TV shows. Is it fair to say Röyksopp have pursued commercial success?

SB - No, I don't think so. I know that some people, around the release of Melody AM, went "huh?" when we featured our music on certain commercials, here in the UK in particular, but that was simply a way for us to get our music out there. It was the early days of the internet and it was a fair way of getting weird electronic instrumental music into peoples' consciousness.

TB - There's certain mechanisms you can avoid if you don't want to make any money on your music. If you use these mechanisms in an open way, judge everything on a case by case basis, you can end up making enough that you can continue. And that's our policy.

Do you ever turn down any offers from people wanting to licence your music?

SB - We say no to a lot of things. We want our music to be heard, and be out there, but we don't want to shove it down your throat. We don't want it to be played everywhere all the time or people will get fed up. We cannot get our income from album sales anymore, so we have to find different ways, and again you have to move into territories like embedding your music into products, or working closer with commercial companies, or doing live stuff. It's a brave new world

SB - Well... all Norwegians are wealthy in comparison to any other country. We're well off, but it's not like we're driving Ferraris. Any success that we have in life is not really measured in terms of cash, it's in how we live.

Do you think your music has progressed significantly since Röyksopp started out?

TB- We make the music mainly for ourselves, but we’ve found something that people seem to appreciate - and we appreciate that. There is some sort of progression in what we've done as Röyksopp, but at the same time you want to maintain what is identifiable as the core of what we are. We're not going to flip it all around and suddenly become a reggae band just for the sake of pushing ourselves.

SB - We were making music for ourselves when we started out, not necessarily recording it, without giving it much thought.

TB - In the beginning we were just trying to figure out how sounds were made, and it always seemed that the most appealing music was that which was more difficult to make. The music that we really liked always had some kind of secret to it, like "how did they do that?" There was a lot of figuring out, experimenting.

SB - And I think the one thing that has stuck with us since day one, when we were kids, is the fact that we strive to find interesting sounds that will make other people go "how did they make that". We strive really hard to give our production a music identity so it stands out from the other stuff out there.

TB – We still use a very basic set-up, and we try to hold on to what has worked, and we are not really efficient about the process of making music. Half the time we don't necessarily have a vision of what we want to do, we just go along with say maybe the sound of a kick drum, and that starts us. And the other half of the time, we’ll have a vision of what we want to create, we’ll talk about it and then set about creating it

Is there anything exciting left to come from electronic music?

TB - Electronic music, especially dance music, has really benefited from technology, and it's so sweet for old sci-fi lovers like us to see how quickly people jump on technology and use it is in the "wrong" way.

Given technological advances, do you think Röyksopp would have an easier time if you were starting out now?

TB - If we were starting out now, well it would be easier to make the music we wanted to make; we spent part of our youth delivering papers in the mornings so we could afford the hardware we needed. Now we could skip that and go straight into creating what we want to create. But to get heard, now, it's a bit more difficult, because there are more voices out there.

SB - Trance and progressive house have suffered because everyone can make it now. I've got an app on my iPhone that can make something that's trance like, and wouldn't sound awful. 15 years ago it would have had a higher value and standing, but now because the technology is available for everyone and so easy to use, it sort of devalues the whole genre.

How long do you think you'll carry on for as Röyksopp?

SB - I still take great pleasure in making music on the scale that we do. Everything we do is very natural and comfortable, and it's in a place that we like to be. We don't sit in the studio trying to come up with a hit.

TB - As long as we can keep it that way, we'll continue. But it's bound to change - you have to have a certain edge, and that fades away as you get older. It's a natural process - if you look at your musical heroes from the 70s and 80s, they all seem to be horrible as they get older. What they're doing has no value. It's not relevant, it's too nostalgic, it's all those things that are uninteresting about music.

SB - It has to do with the fact that you can only make an entrance once.

SB - But we can do other things as well - like for instance produce other people. At some point we'll reach an age where it feels very strange to stand on a stage. How far off will that be? I feel still that I'm very far from that, and that might suggest that I'm about to have some kind of mid-life crisis. But I feel there's other things we can do with our creative talent together.

So you think you’ll carry on working together post-Röyksopp?

SB - We do share some sort of chemistry that's very hard for us to pinpoint. Creatively I think we could easily do something in movies, and that might be fun to try, but music is definitely where we're staying at for now. I guess we'll start writing music for other people, that might seem fresher. And Röyksopp might want to throw in the towel before we turn shit in all honesty.

One night in Paris with The Airborne ...