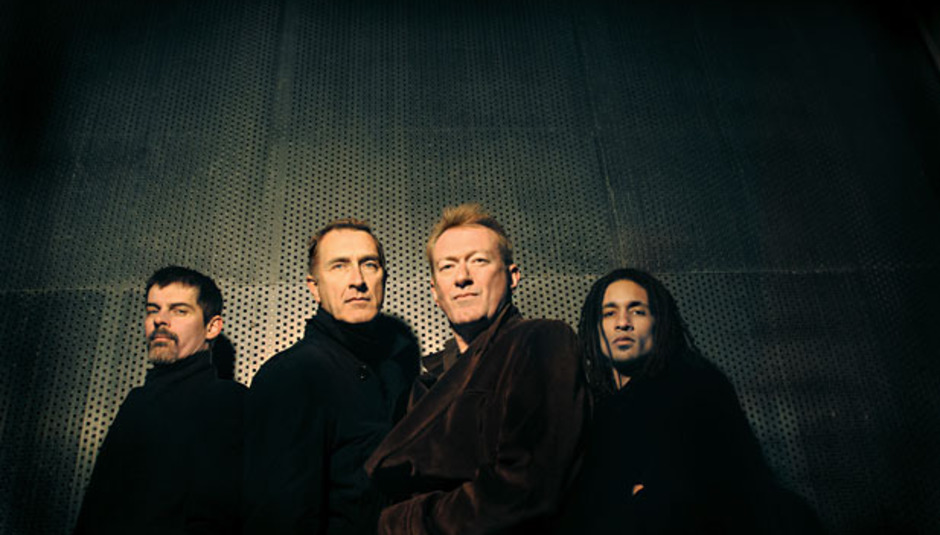 Competition: Decipher our interview with Gang of Four's Andy Gill

Competition: Decipher our interview with Gang of Four's Andy Gill

We can't make out much of this interview, can you? A little competition but first, an explanation...

The irony is hardly worth pointing out, it’s so self-evident.

Throughout 2010, I interview a bunch of artists famous for mumbling, famous for scuzz, famous for brutal distortion, and the ol’ tried-and-tested combination of a speakerphone and a dictaphone produces a lovely, sharp-edged recording. Then, as 2010 draws to a snowy close, I interview a man who, from 1979’s Entertainment through to this month’s Content, has proved himself capable of producing a guitar sound more sharp-edged and more single-mindedly direct than any of his contemporaries or successors – a man, indeed, who has spent the last twenty-odd years sharpening up other peoples’ records, a man who has dedicated his entire life to stripping back unwelcome sonic residue. And my speakerphone and dictaphone conspire to produce the ugliest, fuzziest, migraine-inducingly filthy recording of a two-way conversation I’ve ever heard.

I interviewed Andy Gill, of Gang of Four fame, in late December 2010. It was great – he said lots of clever, funny things about music, culture, politics etc. I then spent the entire month of January attempting to decipher the results, and asking nice people I know to help me do the same. We failed. I mean, we worked out a few sentences here and there (and the opening couple of answers – see below) but not in a way that did Andy a lot of justice. Three words out of every five does not a viable transcript make.

So I went to DiS features editor Cate with this unfortunate news and we had an idea that may or may not be a good idea: why not whack the whole thing up on SoundCloud and see if the DiS readership has, among its number, either an Audacity genius capable of making the Noise Removal button actually, y’know, work; an amateur producer with a Gill-esque ability to sonically disinfect unhappy MP3s; a Gang of Four fan with limitless patience; a generous soul with massive, sensitive ears, á la Roald Dahl’s BFG; or an unlikely combination of the above?

Here’s the game: if you can produce a half-decent transcription of my interview with Andy, or (a more reasonable alternative) you can do something to the recording that’ll make my transcribing it remotely feasible, you win a prize. Can’t tell you precisely what the prize will be, but it will be good. Worth a couple hours of your time, anyway. I’ll also personally buy you a night’s worth of pints at a future GoF show (or some sort of equivalent) and just generally be pathetically grateful – the thought of throwing the whole thing away because of my lack of audio-editing-ability breaks my heart, basically. Friends, do we have a deal? Anyone? Anyone at all?

Gang of Four - Interview (for deciphering competition) by drownedinsound

Here are my first couple of questions, and Andy’s answers to them, to get you going. The audio gets considerably worse after this (although I should mention that my questions are audible throughout, mainly because my voice isn’t coming out of the arse-end of a BlackBerry):

DiS: Entertainment was released in 1979, an era widely defined by the questionable phrase, the Winter of Discontent. And obviously you’ve got a new record coming out at the beginning of 2011 at a time that – well, it felt last Thursday in Parliament Square [during the major student ‘riots’] – another time of significant political unrest. Do you feel like this is a natural response to political times, or is it just a coincidence?

Andy Gill: You mean with Gang of Four’s new album? It’s a good question whether it’s a coincidence or not – we’ve been working on it for the last few years, and one of the first songs we did on this record, in fact the first song on the record as it stands, was written in the first tremors of whatever you want to call it, the credit crunch, financial crisis, the first tremors through the world were whilst we were writing this song. It sometimes feels like we’re kind of Nostradamus- like, when we wrote ‘I Love a Man in Uniform’ we’d never really ever thought about the Falkland Islands, and then it went out as a single, was in the charts, suddenly the troops were going off to the Falklands and the BBC is banning our single. In a much smaller way, we released a song, Ether, which has this chant of “There may be oil under Rockall” and lo and behold, thirty years later, they’re digging for oil under Rockall. It’s quite odd. But that was the beginning of the record, the beginning to the current phase of our current economic cycle.

DiS: I mean, how do you feel about the current politicisation, do you respond to it favourably, do you think it’s going about things in the wrong or the right way? How do you feel just generally about the Tory coalition and the response to it?

AG:I think it’s very interesting seeing – I don’t want to sound pompous here – but seeing a generation suddenly get politicised. On the other side of the coin, and that’s a fat gold coin, is the feeling that the latter part of the eighties, and the nineties, which was a time of great complacency, nobody was that interested in Gang of Four in the nineties, really, we moved very much into a sort of peripheral space – it was a time of easy credit and I think a lot of people felt like they were pretty well-off, worrying about house prices, share prices and I think that, generally speaking, people felt rather better off than they do these days…